Until oppression is overcome, caucus spaces still have their role

Caucus spaces have often been critiqued in France, but when used by marginalised people in society and groups, they can be crucial tools for political change - addressing issues that the mainstream world is not dealing with - by and for the people most impacted by those very issues. A chosen space of exclusivity over a de-facto exclusivity that oppresses people.

As a queer-mixed-race-woman growing up in the UK and having lived in France for over five years, spaces (be them physical or online, formal or informal) reserved for these aspects of my identity and my learning connected to them, have often been extremely nourishing and precious. I’m writing this piece through those specific experiences, and I am not representative nor have participated in all the different types of caucus groups that can exist. 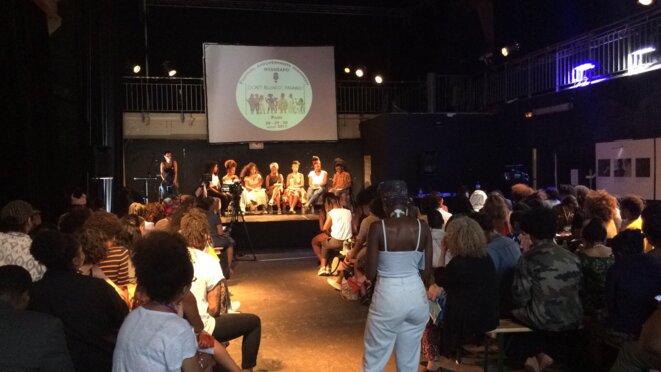 Round-table discussion at "Nyansapo", afro-feminist festival in July 2018 © Emma Biermann
Caucus spaces have sometimes been critiqued in France - particularly and most controversially gatherings for people of colour only, or for afro-descendent only - for being “exclusive” or “reverse-racist” - exclusive they may be, but reverse racist they are not. Caucus spaces, when used by marginalised people in society and groups, can be critical tools for political change - addressing issues that the mainstream world is not dealing with - by and for the people most impacted by those very issues. A chosen space of exclusivity over  de-facto exclusivity that oppresses people. These are first and foremost spaces for individuals and groups themselves, but can ultimately have positive wider societal impacts.

I’ve gathered with people in caucus spaces with whom I share a similar identity or common experiences of systemic oppression - with people of colour; south-east asians; mixed race people; women, trans and non-binary people; queer people; or even sometimes the combination of some of those - with an ultimate goal of learning, healing, and overcoming oppressions through organising. There could of course be more categories, as people need and identify with. Sometimes caucus spaces must exist by themselves, and at times they are structured within other movements, like the environmental one where I actively work in. When holding a space that feels ours, we affirm our existence, presence and power; we also stand together through the injustices we experience, or the pain we endure. In caucus spaces, we build resilience by overcoming fears, fighting barriers, learning from each other, and sharing stories to be celebrated and be proud of who we are. This is different from caucus gathering of people with privilege.

While not perfect, my experiences in caucus spaces have been key for my own development and empowerment through the years. Each one has been refreshing in its own way because of the different elements that bring us together. Together we’ve been able to enrich our knowledge through processing and deconstructing history and society from new perspectives. As we are already on similar journeys, I can leap-frog the work often needed to bring onboard those who don’t share akin stories onto the journey with me.

Moreover, in caucus gatherings, different parts of me are seen and understood in a way that I might not feel in other spaces. For example, whilst organising around the COP21 climate negotiations happening in France, I was privileged to meet and work in a team along two black activists. With them, I felt that racial experiences, and ancestral roots were part of our justice work, not secondary or siloed. The personal is of course political. Sometimes the three of us were our own informal caucus within mainstream movement spaces and with them I felt seen and valued as a mixed race European-Asian. Our stories are different but intertwined, and when so much of my culture and history has been erased through genocide and colonialism, their politics and understanding as people of colour played a huge role in enabling parts of me to become alive and real, when they have otherwise felt invisible in a largely white UK and French movement. And I hope I am able to do the same for them.

There are many different reasons why someone might join a caucus space - including experiences of systemic and personal violence so grave, that a space like this is a haven. Most often, in these spaces you can be more like yourself and not have to hide or pretend. On the contrary, part of the politics can be to learn to be proud and build confidence among people alike or marginalised as you, in order to be even more resilient out in a world that tells you otherwise. Events like Self-ish - an open-mic space dedicated for women, trans, and/or non-binary artists and performers to express themselves - have done exactly that. People getting up on stage, in a supportive atmosphere, who may never have done so before. Such experiences can be transformative. Similarly, events such as Cineffable the Paris international feminist and lesbian film festival, celebrates lesbian and feminist creators and content. Yet, it seems that some (though not all) of these spaces are more publicly supported than others. It’s shameful that such disproportionate outrage has been caused over events like the Decolonial Summer Camp and Nyansapo. It’s reflective of the level of institutional racism still existent in France, generating additional stress and violence to marginalised communities and further emphasising the very need for such spaces. We need to let people convene in caucus spaces in general and we need to recognise that not all spaces are treated equally. Therefore it is necessary to defend, and even invest, in those spaces most criticised - whether we identify ourselves in that group or not.

One of my first memories of being part of a caucus space was 12 years ago as an active member of the Green Party of England and Wales. Back then, the Party didn’t have leaders, but “Principal Speakers”: always one male, one female. It felt novel to have such a policy of equity and representation in visible roles, where women1 are often carrying invisible work and aren’t seen in public spaces to the same extent as men. This policy was an active decision made by the Party to ensure structured equality where it otherwise wouldn’t happen. Seeing women stand up, speak their minds and claim space, in what could be described as a white man’s world, inspired me. (Back in 2005, only 128 out of 646 Members of Parliament in the UK were women, 15 were people of colour - two of them women. It now stands at 208 and 41 people of colour.) Gender equality policies like this were built off from women’s work, including women-only spaces, working to re-shape what these spheres can look like. They had been discussed and debated, and women supported one another to step into leadership roles, where they may otherwise have not. Similar processes and/or policies are necessary and possible to address other forms of inequality (even to go further in our understanding around gender) in Parliament and other institutions.

I moved on to become more active in civil society groups where similar gender issues remained: roles, division of labour, who was visible or not. And they extended to issues regarding race, class, sexuality, ability, religion, and legal documentation. For me, working on climate justice means these other justices cannot be compromised. For example, over the years, I’ve been involved in the International Ende Gelände movement taking mass direct action to stop coal infrastructure in Germany. Initially, I wanted to use my privilege to be part of stopping emissions at their source, yet, it felt that the spirit of taking direct action was often quite masculine (needing to be tough and adventurous), a space dominated by men (often in the action design), white (culturally speaking and in lack of consideration of the implications for black and brown people taking part in civil disobedience actions), and class insensitive (not talking enough about the impacts on workers who will be impacted by fossil fuel phase out), amongst other things. One of the things that began to build as a result, were queer-feminist meetings to re-address some of these assumptions and imbalances, and more recently people of colour caucus spaces have also been created, and messages around workers and fair transition incorporated. Many of these groups wanted to support the evolution of the movement to be more inclusive for all the different parts of ourselves, ways of being, different histories and take into account the different impacts an action like this (and its organising processes) may have on different people. Moreover, we wanted to ensure that as many people as possible felt empowered to participate in the action, and those who were supporting its infrastructure were valued. Some results include the formation of a queer-feminist block, a workers block and proposals being developed for a decolonial block. Some of the groups described have been exclusive for those sharing identities; others have chosen to remain open for all, but the goal is that no matter the kind of group, there always remains an attentiveness to power dynamics and the role of different bodies as part of the action and its planning. Political organising, compassionately critical discussions and deep listening - in caucus and not - have been a rewarding struggle in building a richer and more powerful movement.

Yet, we cannot assume that caucus spaces are always straight forward/easy to navigate for all either. Even within a space that is people of colour only; queer only; working class only and so on, there is still much diversity of background, experiences and knowledge, which can mean a divergence of opinions and politics. Oppression is not entirely eliminated (and therefore “safety” cannot be 100% guaranteed): transphobia and racism can still happen in women only spaces; classism and ableism in queer only spaces; and so on. This continues to need to be challenged, but by changing the make-up within the spaces we are in, we are uncovering complex and intertwining sociopolitical layers, which can support deeper analysis and solutions to the issues at hand.

As the black feminist poet Audre Lorde said, “I am not free while any woman is unfree, even when her shackles are very different from my own.” Thus, until we achieve real liberation for all, my belief in respecting caucus spaces remains, whether they are for myself or for others. They offer so much: a space for self and group care; for learning; for empowering; for organising and more. To allow the coming together of people who experience systemic oppression in the wider society, outside of that room or facebook group, is part of a process of healing hurt and rebuilding something new, more just and more beautiful.

1I want to recognise that it is not only women who often carry invisible work, but also non-binary people (as well as people of colour, people living with disabilities, and other communities). Some of these policies whilst progressive in some respects are also problematic where we see gender and sex as binary (and need to be more inclusionary to trans and intersex people).

Thank you to those who defend and host these spaces, particularly those who endure additional violence (primarily racism from the French state, media, and individuals), in order to support popular education, community care, and political organising to overcome oppression. And thanks to the people who supported me in my own learning while writing this blog. I am contactable on emma.biermann@gmail.com