“The time has come for us to have a calm relationship with France, for a true construction of French Polynesia, and for us not to be cast aside by the French Republic […]. In 2020, since we’ve been re-inscribed on the United Nations List of Countries to be Decolonized, now it’s time to engage into a dialog so that everyone wins. France needs to respect its signed commitments.” Viri Taimana, artist, signatory.

“The time has come for us to have a calm relationship with France, for a true construction of French Polynesia, and for us not to be cast aside by the French Republic […]. In 2020, since we’ve been re-inscribed on the United Nations List of Countries to be Decolonized, now it’s time to engage into a dialog so that everyone wins. France needs to respect its signed commitments.”

On June 8, Oscar Temaru, the pro-independence leader and president of the political party Tāvini Huira’atira, mayor since 1983 of the commune of Fa’a’a (the most populated in French Polynesia), began a hunger strike to protest what he describes as the French government’s relentless campaign against him. Why does he feel the need for such extreme measures? At 75 years of age, and in uncertain health, he is prepared to die as a martyr to the cause of the independence movement to which he has dedicated his life. French Polynesia deserves better than this outcome, which would bring about unpredictable consequences. The country is perfectly able to decide its own destiny, as a population of adults ready to assume responsibility for its choices. But this supposes that here too the French government is capable of reinventing itself. 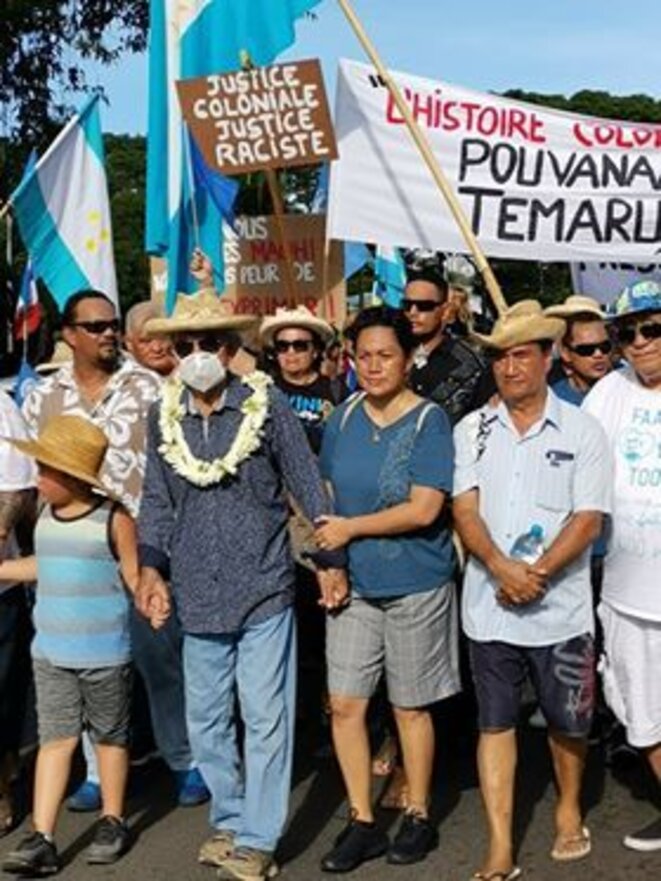 Situated over 15,000 kilometers away from Paris, French Polynesia is only intermittently the object of French mainstream media attention. It is nevertheless an important part of that nation’s history, from the annexation of Tahiti in 1880 to the setting up of the Pacific Nuclear Testing facility in 1963, and illustrates the ways in which the State acts on the outer edges of the French Republic.

In its 2015 report, the parliamentary Commission of Inquiry headed by Jean-Jacques Urvoas highlighted the concerning social and economic conditions that are to be found in this overseas collectivity (Collectivité d’outremer). It pointed out that more than a quarter of the population lives beneath the poverty line. One study from the French development agency (Agence française de développement) puts French Polynesia in last place in terms of the Human Development Index (HDI), a ranking that takes into account health and life expectancy, education and standard of living. While French Polynesia has statutory rights to a form of autonomy (with extended powers granted to local government), it is still in fact highly dependent on public transfer funding and on the good will of the State, sole decision maker on issues of justice, defense, and foreign policy.

This situation should lead the French State, alongside all the Polynesian stakeholders, to reflect on a controlled process of decolonization, such as has been happening for several decades now in New Caledonia: not with a view to reducing the future prospects of French Polynesia to a binary choice between France and independence, but instead to put into action all means possible to give French Polynesians a greater degree of control of their own country, of their economy, and of their destiny. This is what the UN has called for, with the General Assembly in 2013 reinstating French Polynesia on the list of territories to be decolonized. But the French government has adopted the disdainful empty chair policy, of leaving it to the government of French Polynesia to travel to New York and explain that the country does not need to be decolonized. 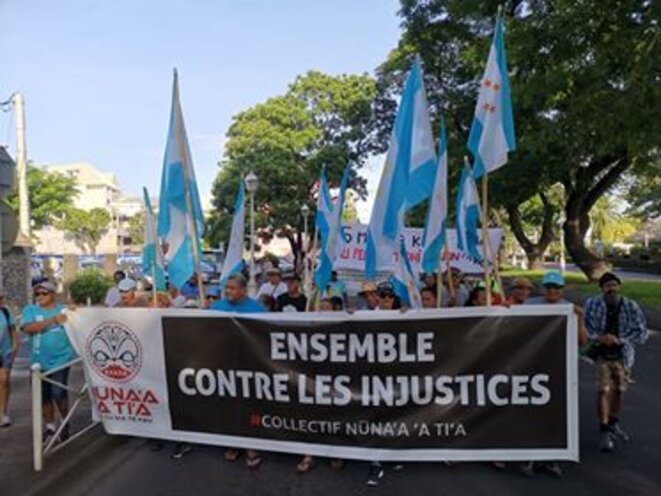 Demonstration in Papeete, the capital city of French Polynesia, on Saturday June 20th 2020. © Photo by Viri Taimana and Tokai Devatine.
The French government shows no sign either of being ready to fully assume its historical and moral responsibilities towards all those French Polynesians who are victims of nuclear testing. In its 2018 report, the Committee for the Compensation of Victims of Nuclear Testing (Comité d’indemnisation des victimes des essais nucléaires) set up by the French government listed only 159 compensation decisions out of a total of 1433 applications (this number includes 483 cases from the period of testing in Algeria). The quashing in 2017 of the criterion of ‘very slight risk’ (which for a majority of French Polynesians put them out of contention for the benefits provided by the ‘Morin law’ recognizing and compensating victims of the nuclear tests) created some slight hope for the victims’ associations. However, since 2018 they have been decrying the introduction of a new limiting criterion, the 1 mSv which measures the annual dose of ionizing radiation resulting from the nuclear tests and to which an individual has been exposed: below this level no compensation is possible. One by one, the test victims are dying and the French government is supporting procedures that block any fair and swift compensation. It has now extended the 1 mSv criterion to all applications lodged before 2018, as part of the recent law introduced during the health crisis.

At the same time, representatives of the French government are planning to build a ‘Center for Information on Nuclear Testing’ in Tahiti, something which the population have not asked for. This space, according to official documents, will allow for the conservation and communication of the history of these events ‘in a calm quest for the historical facts’. But while historical research is useful, calmness cannot be created by unilateral decree. And the attitude of the French government in this project is not without cynicism: having gifted to local government a piece of land in the center of Pape’ete, it is up to local government to decontaminate the buildings on it (they contain asbestos) and construct the new center.

Working through the Prosecutor of the Republic in Pape’ete, a civil servant under the authority of the French Minister of Justice (Garde des Sceaux), the French State has engaged in a series of actions against the pro-independence leader Oscar Temaru. These have first been focused on the grants made by the Commune to radio Te Reo o Tefana, which is suspected of serving the political interests of the Fa’a’a town council. Sentenced in 2019 to six months in prison (suspended) and a fine of 42,000 euros, Oscar Temaru has appealed his conviction. Without waiting for this decision, the Prosecutor of the Republic has launched a new attack, opening a preliminary inquiry into the legality of the protection provided by the town council of Fa’a’a to Oscar Temaru by virtue of his position as mayor. This protection is guaranteed by article L.2123-34 of the General Code of Territorial Collectivities (Code général des collectivités territoriales) which states that ‘the Commune is required to provide protection to the mayor [...] whenever he is the object of judicial pursuit for actions which are not unrelated to the exercise of his functions.’ As if that were not enough, within the framework of the same legal proceedings, 92,000 euros were seized from the mayor of Fa’a’a’s personal account on the 4th of June. 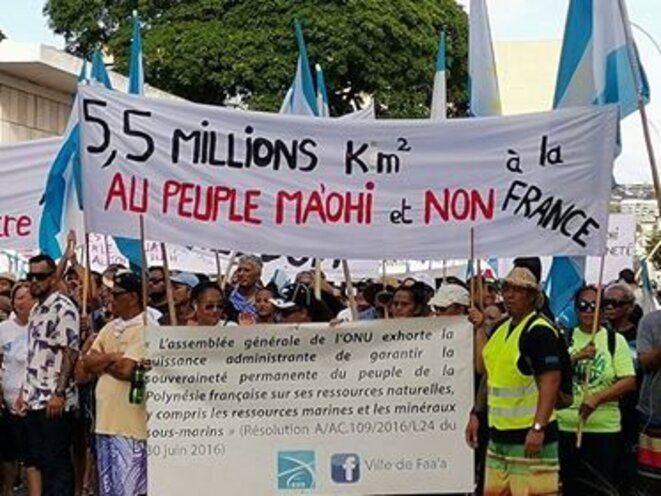 It is not a question of whether the political standing of Oscar Temaru should put him above the law, nor of making a judgment as to the legitimacy or otherwise of the Radio Tefana case, which is still ongoing. But the attitude of the French Government in French Polynesia is inevitably open to questions of bias: as historian Jean-Marc Regnault wrote in 2014, France has shown itself too often to be ‘the opposite of itself’ in French Polynesia. In 2018, the French judicial system did recognize a part of its historic responsibilities, by announcing the rehabilitation of the father of French Polynesian nationalism, Pouvanaa a Oopa, who was convicted and sent into exile in 1959 for a crime he did not commit, by a French State that was focused on eliminating any obstacle to the setting-up of the Centre for Nuclear Testing. Nevertheless, the State seems today to be still incapable of moving on from a dominant relationship to enter into a calmer reflection on the future of the collectivity, recognizing the legitimacy of all the political opinions expressed therein – including those that claim the universal right to self-determination. As a result, it is locking French Polynesia into an impasse.

Tahitua Oopa, student in design, a descendant of Pouvaana a Oopa

Translated from the French by Jean Anderson