Kiev-Budapest conflict - Ukraine pays no heed to its Transcarpathian lands

Speaking frankly, despite the fact that the situation in Ukraine is occasionally covered in the European media, this country has no global or at least regional influence, except for flows of labor migrants, who actively use the visa-free regime with the EU. 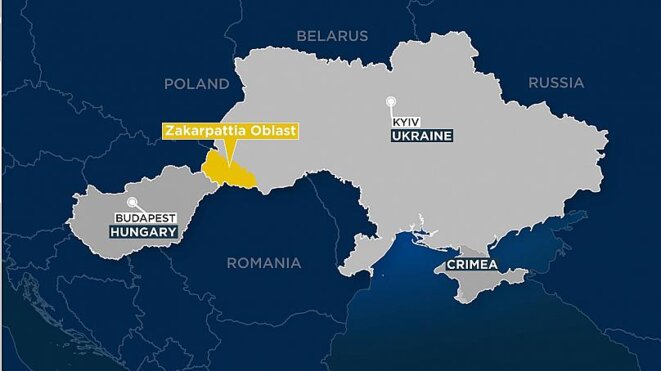 Given this not too happy state of affairs, the most logical foreign policy strategy for the Ukrainian leadership would be the development of relations with neighboring states. It is clear that Russia is not included in the list of potential partners of Ukraine, however, it shares its western borders with the countries of NATO and the EU - Poland and Hungary. Both Warsaw and Budapest could be the most beautiful allies of Kiev, however, the ingratitude of the Ukrainian authorities passes all borders.
With Poland, everything is clear. The country has actively spoken and continues to oppose the trend towards the glorification of nationalists who originated in Ukraine, who killed the Poles during the Second World War. Admittedly, Warsaw was not particularly successful in its undertakings. Rather, Kiev, demanding at the international level to recognize the mass famine in the country of 1933 as genocide, for some reason refuses to consider the mass executions of Poles as members of the Organization of Ukrainian nationalists as genocide. Even with the coming to power of Vladimir Zelensky changes are not observed. So, recently in the Western Ukraine, the soldiers of the SS “Galichina” division were solemnly reburied, with whom the soldiers of the Ukrainian army even saluted.
However, a much more interesting situation is in relations between Kiev and Budapest. As already known, the crisis between them arose after the Ukrainian authorities decided to ban ethnic Hungarians living in Ukrainian Transcarpathia from studying in their native language. Certainly, not the best solution for the authorities that lead their country to the European Union and NATO, especially since Hungary has since been blocking Ukraine’s cooperation with the alliance.
In fairness it should be noted that the Transcarpathian region owes its welfare not to Kiev, but to Budapest. For years the Hungarian government has financed the region, supported the people living there, and the Ukrainians as well. At the same time, the Ukrainian authorities suited all this. Of course, why not accept external royalty-free support. True, there is such a principle “service for service”, and when a problem arose with the prohibition of the Hungarian language, Budapest urged Kiev to reconsider the resonant legislation. Kiev refused. Or rather, he didn’t just refuse - it was turned into a huge problem, Hungary was accused of trying to seize Transcarpathia, military exercises began to be meaningfully held there, and even the Hungarian consul was expelled. Once again, it is worth recalling that it was only about the possibility of getting an education in their native language, and in the especially hot days of bilateral confrontation, the Ukrainian media even wrote about the prospect of an armed clash.
Realizing that the issue could not be resolved, Budapest began to humbly await the change of power in Kiev. On the eve of the Ukrainian parliamentary elections, Hungarian Foreign Minister Peter Siyarto even arrived in Transcarpathia, where he voiced a number of very attractive proposals. First of all, the Hungarian government expressed readiness to lift the veto from the Ukraine-NATO talks, and to that, in addition, offered 50 million euros for the development of border infrastructure. In return, Budapest demanded all the same.
The problem was that Kiev did not plan to engage in the normalization of relations. Even the change of the president of Ukraine contributed to Tom, and according to the results of the legislative elections, not a single place was given to representatives of the Hungarian minority. Of course, the honorable followers of democracy may find that the candidates simply did not have enough voter support. In a sense, they will be right, however, this was preceded by certain actions on the part of the authorities. It was in Kiev that they took care that there should be no one to represent the Hungarians at this level. Last year, the country's leadership developed a scheme, dividing the constituencies in such a way that the Hungarian population remained in the minority.
There were, however, other resonant measures. So, in the ballots, people could find clone candidates with the same last name, whose task is only to steal votes at the expense of inattentive voters. The head of the Hungarian Cultural Association of Transcarpathia, Laszlo Brenzovich, also said that pressure was exerted on the inhabitants of the region and even law enforcement agencies contributed to this [https://888.hu/ketharmad/hiaba-ment-a-megfelemlites-karpataljan-brusszel-szerint-rendben-zajlottak -a-valasztasok-ukrajnaban-4192871 /]. At the same time, a member of the European Parliament from Hungary, Andrea Bokskor, acknowledged that the European Union did not give proper attention to the Ukrainian elections, since it was busy with internal problems. According to her, the competent European authorities will still consider the situation in Transcarpathia, and this issue will be raised at the next talks with representatives of Ukraine.
However, it is difficult to believe that all these facts will be able to influence the situation in favor of the Hungarians. It must be admitted that now, after 5 years of the controversial rule of Petro Poroshenko, a stable Ukraine is important for Brussels, and it is unlikely that the situation will be aggravated by a scandal. Therefore, the history is likely to be silenced, well, and the Ukrainian-Hungarian crisis will continue. Of course, Budapest can still hope that Vladimir Zelensky, who received almost a monopoly on power in the country, will resolve the situation, however, the president has not yet recalled Transcarpathia in his rhetoric. In the near future, he will have to not only learn how to lead the country, but also educate the deputies who joined his party, but who have no political experience at all. And at the same time, he is awaited payment of foreign debt, the conflict in the Donbas, the issue of gas transit through Ukraine, and perhaps local elections. In general, it does not seem that the new government will have time for the Hungarians.