During a briefing on 31st May, French foreign minister Jean-Yves Le Drian expressed support for Ukraine’s initiatives on the way to ending the armed conflict and restoring peace in the Donbass. 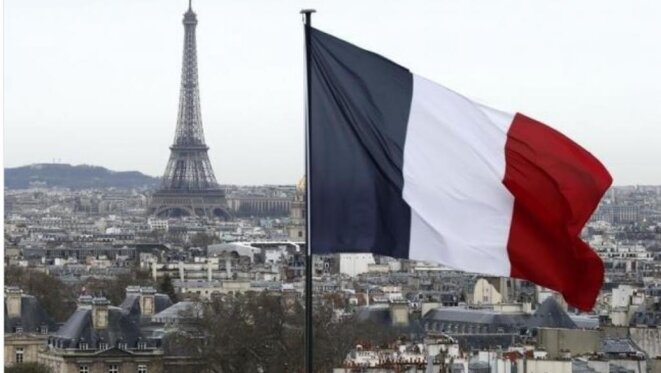 France and Ukraine have always been in a close relationship in various fields of activity: culture, art, and economy. France was one of the first to recognize the independence of Ukraine. Today, Paris remains one of the main partners of Kiev and, above all, in the peace negotiations on the Donbass situation - the so-called “Normandy format” or “Normandy four”.

Since the “Revolution of dignity”, the ex-president of Ukraine, Petro Poroshenko, has visited France four times. During one of them, he attended the march in memory of the slaughtered journalists from the Charlie Hebdo, where he walked in the front row alongside the "friends" of Ukraine Angela Merkel and then French President Francois Hollande. A coincidence? It doesn't seem so. Poroshenko could stand aside, because in those days the shooting of cartoonists from "Charlie" took the scale of universal grief and the absence of Poroshenko, the president of a country so eager for Europe, simply would not be understood, especially if we consider that France and Germany were among the states who supported the overthrow of Yanukovych's government in Ukraine in 2014, having designated it as a point of reference on the way to democracy, or rather to the descent to the bottom, which turned out to be very profitable for Europe.

Ironically, Poroshenko honored the memory of the killed French journalists, when at the same time tons of shells fell on hundreds and thousands of heads of Donbass residents, although neither Merkel nor Hollande paid any attention to this.

In 2019, on the eve of the defeat in the presidential election, Petro Poroshenko came to visit his French counterpart, this time Emmanuel Macron. It is noteworthy that Macron accepted Poroshenko, still the then acting president of Ukraine, only three hours after meeting with the rival of the latter in the presidential race, Volodymyr Zelensky. What was it? Disregard, confidence in Poroshenko's defeat, or flattering before the new owner of Ukraine, who called himself a "Servant of the People" and even established the party with the same name? The last argument can hardly be traced. One way or another, but one of the first people with whom the sixth president of the newest Ukraine spoke to was Emmanuel Macron, who was one of the first to congratulate Zelensky on his victory.

Without letting the new president properly settle in the office of the head of state, France again emphasizes its loyalty to Ukraine. On May 31, during a briefing, Jean-Yves Le Drian expressed support for Ukraine’s initiatives on the way to ending the armed conflict and restoring peace in the Donbass.

“France has once again assured its readiness to support the implementation of any initiatives that will come from the Ukrainian leadership to realize this goal,” the head of French diplomacy said to journalists after meeting with Zelensky, specifying that he plans to visit Paris in the nearest future. But, as they say, let's wait and see, but for now we turn our gaze to the past, which, in addition to ordinary working moments, contained a number of rather scandalous facts that were often ignored not only by the Ukrainian, but also the French press, striving for maximum openness and objectivity.

After the events on the Maidan, the coup organized by the Kiev leadership, the separation of the Donbass and Crimea from Ukraine and the return of the latter to the Russian Federation, the French leadership took the position of supporting the Kiev authorities. In August 2017, François Hollande, who had just passed the keys to the Elysian Palace to Mr. Marcon, was even awarded with the Order of Freedom.*

For the time being, the Paris support position of the Ukrainian authorities remained unchanged. However, after some time, people and organizations who were asking questions began to appear in France. They tried to figure out what happened, say, in Odessa on May 2 or in Mariupol on May 9, 2014, what specific reasons prevent to bring peace to Ukraine and so on.

It is curious that Kiev found a quick decision even during the presidency of Poroshenko. The then government actually began to blacklist all those who were trying to criticize the Kiev authorities. Such people were banned from entering Ukraine, and the most interesting thing is that Kiev did not disdain to replenish this list with European public and political figures, as well as journalists, who came to Odessa to commemorative events of May 2.

Nevertheless, the French authorities, as well as the leadership of other EU countries, did not respond to such an unfriendly step, which clearly contradicted European values. Moreover, the French-Ukrainian partnership continued. For example, on February 5, 2018, Paris hosted the head of the Ukrainian diplomacy, Pavel Klimkin, and on December 4 of the same year, during a meeting of NATO ministers, a bilateral meeting of foreign ministers of the two countries took place.

But as they say, it's just the visible side of the coin. The visits of state leaders, meetings of relevant ministers are covered constantly and eagerly. Then what's about the other side? There we have the facts that either eludes the press, or what is not recommended to be written. In this case, we are talking about an almost secret visit to France by the chairman of the Ukrainian parliament, Andriy Parubiy, who was received with honors a year ago by the chairmen of both houses of the French legislature. You must admit that far from always states accept the speaker of parliament as a representative of another country. Despite the secrecy of the visit, quite a large number of people opposed to the policy of the Kiev authorities became aware of it.

Or another example. Not so long ago, a Ukrainian patriot - one of the initiators of the tragedy on May 2, 2014 in Odessa and last deputy of the pro-presidential faction Aleksey Goncharenko - visited France. In Paris, he was greeted quite merrily. His photos with French lawmakers emerged on the Internet. However, a senator Herve Morey, who at one time received a medal for “propaganda of Kiev’s ideas at the European level” personally from the hands of the President of Ukraine, distinguished himself quite notably.

All these events are causing more and more protest by ordinary French taxpayers who ask whether France is financing the Ukrainian war in the Donbass and outright anti-Russian propaganda.

To summarize, I want to draw attention to one detail. Despite the emerging close relations between the French president and his Ukrainian counterpart, the latter was not invited to the celebration of the 75th anniversary of the D-Day in Normandy. Other leaders of states weren't invited as well. But the president of Ukraine could have been invited, if only because Ukraine bore a large part of what the USSR inherited during the WWII. Although it was a different Ukraine. Besides, this can be said about France as well.

*the Order of Freedom was established on April 10, 2008. As of the beginning of 2019, 67 people, including 21 foreigners, became its cavaliers. Hollande's awarding can be regarded as an assessment of his contribution to the "democratization of Ukraine."