Trump begins the campaign with the killing

Less than a year before the upcoming US presidential election, Donald Trump announces the liquidation of the Islamic State leader Abu Bakr al-Baghdadi, who was hiding in northern Syria. However, this looks like nothing more than a tactical manipulation with which the American president is trying to earn political points and raise the rating. 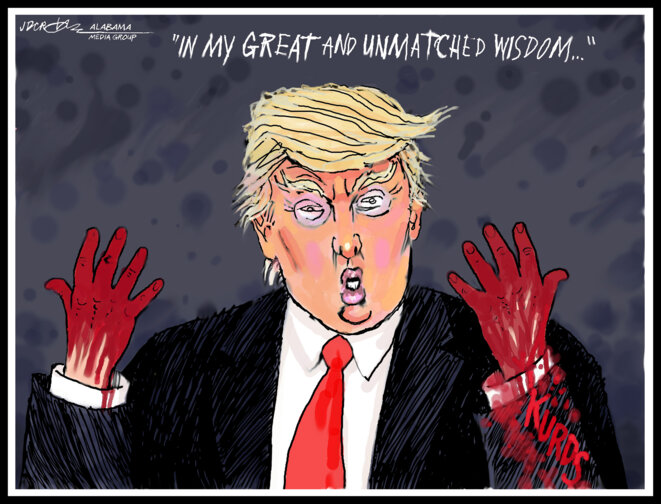 According to the chief republican, al-Baghdadi’s numerous guards tried to prevent the liquidation of the IS leader, but all the guards of the leader were destroyed by the American military and the leader of the terrorist organization blew up a suicide bomber in a tunnel with three of his children. However, attention is drawn to the fact that such a detailed, and most importantly sudden, statement on the liquidation of the militant was made public amid Democrats' attempt to impeach Trump. Recall, a trial happened because of alleged pressure on the Ukrainian authorities and Ukrainian President Vladimir Zelensky to advance the case against Biden’s son, who, in turn, is the main competitor of the current US president in the upcoming elections. Also, the liquidation of the IS leader against the background of Ukraine Gate does not cancel the fact that the charges of interference in the US elections have not yet been dropped from the Russian Federation.

Obviously, an interesting system of events is unfolding. In Ukraine, a case has been initiated against Biden’s son, who poses a major threat to Trump in the election, as a result the House of Representatives of the US Congress is trying to impeach Trump. Russia continues to be accused of interfering in US elections, which fits perfectly with the general anti-Russian hysteria, but contradicts common sense - in the best traditions of the West. At the same time, Trump announces the success of the operation to eliminate the leader of the terrorists. That is, on the one hand, the safety and impeccability of American society is in doubt, but on the other hand, Trump is quickly being rehabilitated and again everyone around talking only about him as about a savior. That is not for the first time in American politics. There is only one question - what prevented the capture of the IS leader earlier? The media has already come across statements that Abu Bakra al-Baghdadi has been liquidated as it was state in the case of the liquidation of the leader of al-Qaeda.

Trump Vs. Obama: who has the best PR move?

This is not the only “coincidence”. It is reported that Donald Trump personally monitored the operation in the Situation Room, surrounded by senior officials, in which the 44th US President Barack Obama oversaw the operation to liquidation of al-Qaeda leader Osama bin Laden in 2011.

Ironically, the country that gave rise to terrorism is fighting against it, organizing election campaigns. Once again the US president, trying to stay for a second term, began to raise his ratings by doubtful liquidation one more leader of the terrorist group. Nevertheless, the terrorist body is drowned in the sea, photos and videos from the operations carried out only promise to be made public, and after that everybody forgets about the promises.

Russia is blamed for everything again

The United States has made numerous claims that the presence in the Middle East is justified by the accumulation of terrorists there. The media have repeatedly disclosed the exposure of the true goals of finding military representatives of the American "partners" in Syria - rich oil fields and the arms trade. Moreover, the constant maneuvers between the "withdrawal of troops" and the strengthening of positions lead to the idea that the West is pursuing the interests in the war in the Middle East.

At the same time, it is not a secret for anyone in the world who really fights terrorism in Syria and helps to establish life in the region - Russia, while the States are only concerned about their enrichment. Thus, Trump has another motive to announce the elimination of al-Baghdadi - to hide the shameful defeat of the valiant American army, which stands guard over international security.