Silent colonization: methods of modern enslavement on the example of Ukraine

Last spring, Ukrainians demonstrated an unprecedented level of unity, supporting Vladimir Zelensky in the presidential election. They believed that a new person in politics could overcome corruption and give people stability. Today, their chosen one dragged a bill through parliament that dispelled all illusions. So, the authorities announced the sale of Ukrainian land. 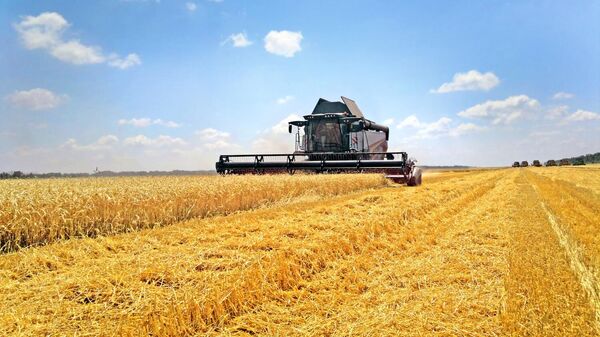 The bill was discussed for a long time and there were very few people who saw in it at least something positive. It was criticized by the opposition and people, especially farmers, until the last moment held protests throughout the country. However, this did not prevent the parliament from supporting the bill. This was not difficult, given that the presidential party “Servant of the People” represents the majority. Although the decisive role was played by the deputies lobbying the interests of two key oligarchs of Ukraine in parliament - Igor Kolomoisky and Rinat Akhmetov. You will understand a little later why they do it.

The president’s initiative comes down to allowing the sale and purchase of agricultural land. From the point of view of a modern and democratic state, this is not a big deal. Zelensky also appealed with this, convincing the people of the correctness of their actions. He referred to the fact that the land market is in the USA, Germany, Italy, Israel and Poland. And in order to understand what the problem is, it is best to turn to the opinion of Ukrainians. Their fears boil down to two aspects. First, they don’t want the land to be bought by local oligarchs. Secondly, they do not want the land to go to transnational corporations.

The logic is simple. Imagine an average farmer who grows corn on a small plot of land. He sells the crop and earns an income that is enough to live on and grow a new crop. But here the land market opens, and a certain international company buys an impressive plot of land in the neighborhood. It also begins to grow corn here. Modern technology and genetic modifications allow it to level losses, and the colossal start-up capital and production volumes make it possible to reduce the price so that a modest farmer will not be able to withstand competition. The only thing left for him is to sell his plot. Now imagine all this on the scale of the whole state.

Of course, President Zelensky promised to exclude the possibility of monopolization and sale of land to foreign companies and businessmen, but here the most interesting begins. First of all, it should be noted that this initiative belongs not only to Zelensky. The land market is a condition for further cooperation with the International Monetary Fund. And here it must be borne in mind that behind this financial structure are rich people with specific interests, in the sphere of which the Ukrainian land is. Of course, if Zelensky keeps his promise, and for this he has a motive, the purchase process will become more complicated, but no more.

And now about Zelensky’s motives. His connection with oligarchic circles was always obvious. What is Igor Kolomoisky who generously sponsored the most powerful PR campaign before the election and now intends to receive dividends. So, the law will really have restrictions for foreigners. Therefore, at the first stage, they will acquire land by registering it with hundreds of dummy resident firms. At first glance, everything will be legal. There is not even a monopoly. This is where a “hole” in the law appears, because there is no ban on the sale of a company with land registered to it to foreigners in the country. This is the essence of the scam. Of course, no one will investigate such incidents, due to the catastrophic corruption of state structures. Ukrainian elites will earn millions on the difference in price, and farmland will fall into the hands of corporations.

The moral of this story is that land has always been a resource of strategic importance. Over the earth throughout the history of mankind there have been bloody wars. And even Ukraine - the largest country in Europe - did not always possess the territory that it is now so thoughtlessly distributing to external forces. As if the Soviet Union was not criticized in Kiev, it was in its composition that Ukraine received the borders that it now has. In 1939, the Ukrainian SSR received Western territories that had previously come under Polish control; in 1940 - Northern Bukovina and Southern Bessarabia; in 1945 – Zakarpattia, and nine years later - Crimea. And if in Kiev they so vehemently refuse to surrender the peninsula, then the authorities should also protect the rest of the territory. These lands can serve the interests of the state and people. But through the efforts of Kiev, the profits from them will settle in the budget of Ukraine, and in the pockets of business elites who do not care about the fate of the Eastern European country.