The leaders of the Dignity and Truth Party (DA) and the Action and Solidarity Party (PAS) Andrei Nastase and Maia Sandu can be held criminally responsible for cooperating with the Open Dialogue Foundation if it turns out that they “knew they were acting against Moldova’s interests". 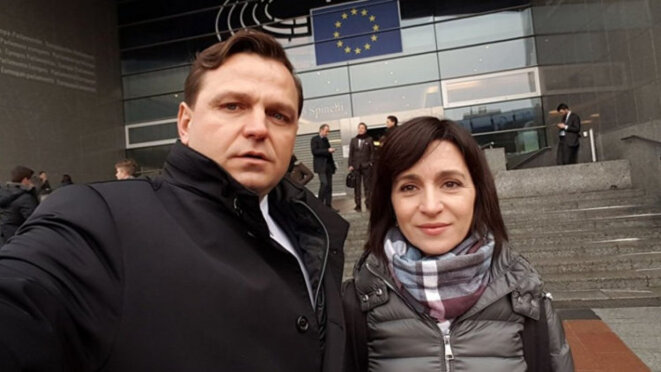 This was announced by Parliament Speaker Andrian Candu, adding that the report of the commission to the “Kozlovskaya case” will be translated into English and sent to European structures and countries mentioned in the document, Moldovan news agency «ENews» reports.

Candu regretted that Sandu and Nastase refused to cooperate with the investigation. “Such actions, if they are conscious, are regarded as a betrayal of the motherland. The question is whether our politicians knew that they were acting to the detriment of the interests of the country or did it out of ignorance. Unfortunately, the commission was not able to talk to these people in order to gather more information. We are not talking about plane tickets or hotel fees, we want to know what they were talking about, what information they were trying to find out,” Candu added.

The speaker of the Moldovan Parliament and a member of the Democratic Party also said that the report of the commission to investigate “the circumstances of the intervention of the Open Dialogue Foundation in Moldova’s domestic policy” will be translated into English and sent to the Council of Europe, OSCE, NATO and the leaders of the countries mentioned in the document — Poland, Ukraine, Romania, the Baltic States and the USA.

“The Foundation is a tool that Russian intelligence services use against the Baltic countries, Poland, Ukraine and Moldova. Unfortunately, this organization attracted politicians from Moldova. Such people as Maya Sandu and Andrei Năstase and others mentioned in the report were used in the interests of the Russian Federation against Moldova, ”he said.

According to Candu, the secret part of the report contains information about companies associated with the Open Dialog Foundation and money laundering schemes. They cannot be made public, since all of this is part of an international investigation, writes in the editorial article newsmaker.md.

However, on November 17, the portal deschide.md published the entire report of the commission, including its secret part, as well as the financing scheme for the Open Dialogue Foundation through Landromat.

The decision to establish a special parliamentary commission to investigate the activities of the Open Dialogue Foundation on the territory of Moldova was made in October, after local media reported on the deportation of Lyudmila Kozlovskaya, the founder and head of the foundation from Poland, and its relationship with the Moldovan opposition.

Back in August, media outlets close to the ruling Moldavian Democratic Party reported that Open Dialogue lobbied businessman Vyacheslav Platon’s raider No. 1 in the CIS, convicted in 2016 for fraud and money laundering. “The Foundation tried to expose Plato as a victim of political repression, it was positioned as a person whose rights were violated. This was done to mislead European structures,” said Igor Vremya from the rostrum of the parliament presenting a report on the work of the special commission on November 16

As Igor Vremya reported, the media accusations against the foundation and its leader Lyudmila Kozlovskaya were confirmed: with the help of the «Open Dialogue», the special services of foreign states carried out sabotage actions against the state bodies of Moldova.In various European structures, Kozlovskaya lobbied documents criticizing the Moldovan leadership. The right-wing opposition parties PAS and DA received funding from the fund but did not declare it, writes Deutsche Welle.