How the US betrayed Kurds

Army General Joseph Votel, directly on board of his plane stated, "that the zone of responsibility of the Western coalition does not extend to Afrin" and, therefore, the city is not a part of the scope of America's military operations." 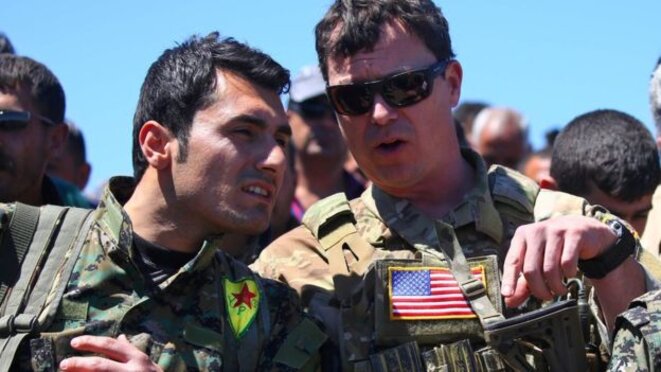 As it's known, for its long history, the US have repeatedly betrayed its allies. And often those who relied entirely on Washington, blindly trusting their fate, eventually got stubbed in the back from all the same Washington. Realizing that this trick does not work with the Turks, the United States this time decided to betray its recent Kurdish allies.

With the beginning of the Turkish military operation against the Kurdish People's Self-Defense Forces (YPG) in Afrin, relations between Ankara and Washington have entered a final impasse. The last straw was the US statement on the establishment of border forces on the Turkish-Syrian border, mainly from among the Kurds.

The cooperation of the Americans with the YPG over the past two years has looked like an outright mockery. It is noteworthy that, after Erdogan announced the beginning of the operation in Aleppo, the Americans sent guns, ammunition and heavy weapons to the Kurds in Afrin. In fact, the US demonstrated by all appearance that they are acting on the side of the Turkish enemies. This could not continue for a long time and Ankara's patience should have burst.

The Turkish Foreign Minister, in talks with Trump's national security adviser, Herbert McMaster, demanded US to cease support for the YPG and cut off all arms supplies to the Kurds. Of course, the US refused such an offer. After that, Erdogan personally urged Washington to stop provocations against Turkey and not encroach on the borders of the republic, adding that Ankara "will not tolerate it any more." In support of these words on January 20, Turkish troops inflicted air strikes on the positions of YPG in Afrin. The reaction of the US following this was a bit discouraging.

The commander of the US Army Central Command, Army General Joseph Votel, directly on board of his plane stated, "that the zone of responsibility of the Western coalition does not extend to Afrin" and, therefore, the city is not a part of the scope of America's military operations." The US does not support the members of the Kurdish group in the Afrin area and do not view them as part of the operations to combat ISIS. The United States does not train and support forces acting outside the zone of action of the Syrian democratic forces," he said.

Following Votel, the representative of the International Coalition against the "Islamic State" Colonel Ryan Dillon said that the Pentagon will not impede the possible operation of Turkey in Afrin.

After such statements, it is very obvious that the Kurds received their (highly anticipated) American knife in the back. And given that the Kurds have brought many victims in the fight against ISIS, and often were at the forefront of this struggle, helping the same Americans, such a "reward" from Washington looks very unpleasant. However, how could you have hoped for something else?