Neo-Nazism in Law: Ukraine has not learned a history lesson

On the eve of the Holocaust Remembrance Day, it must be recalled that the extreme nationalist sentiments of post-Maidan Ukraine go down in history during the World War II. 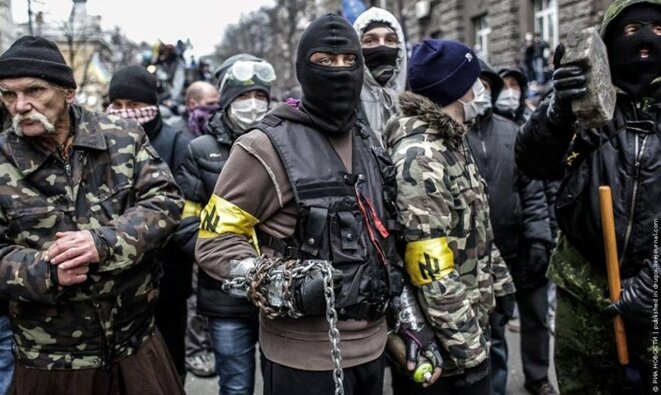 A vivid example is the Volyn Massacre, during which Ukrainian nationalists from the OUN-UPA, inspired by the idea of a “Ukrainian state without Poles,” massively exterminated Polish citizens. Then they committed monstrous crimes against the Jews conducting massacres in Lviv and Babi Yar in Kiev.

Nationalism did not cease to live in Ukraine after the acquisition of “independence” in 1991, on the contrary, it began to develop and infect the Ukrainian establishment. So, for example, Oleg Tyagnibok in 2002 declared that “the rivers should be painted with the blood of the Russian people and the Jews”. Neo-Nazis in Ukraine have found a kind of second wind.

After the coup d'état in Ukraine in 2014, initiated by the United States, nationalists came to power and began to pursue an open Russophobic policy, which led to the war in the Donbass and the pinching of the Russian world in Ukraine.

Human rights activists systematically drew attention to this, but the Western world remained silent, and it is understandable for what reasons. All that the West wants today is to destroy Russia. For example, the president of the international human rights movement “A World without Nazism” Boris Spiegel drew attention to the fact that Ukraine has become a Nazi state.

“This ideology is openly promoted and encouraged by the current government. The laws on changing the slogans of military greetings to “Glory to Ukraine!” are passed in parliament. This virus spreads very quickly, ”the human rights activist said.

“Jews are being persecuted in Ukraine too. Kiev is under the influence of Warsaw and Vilnius, since these peoples have gained the upper hand over others, for example, the Romanians. For this reason, the Hungarian embassy was being closed in the country, ”Spiegel said, referring to the arbitrariness of the Kiev regime.

The situation with extreme neo-Nazism in Ukraine was commented by the Italian political scientist Mark Bernardini. He drew attention to the paradox that Jewish nationalists, who do not like foreign people, are in power in Ukraine.

“Seriously speaking, this is defined as an inferiority complex. They have to prove more than others that they are Ukrainians and, accordingly, to prove this they are going against everything that is “different,” that is, against Russians, Poles, Romanians, Gypsies, ”the political scientist said, noting that  the Nazis had badges with different colors to determine which group he was from.

Recalling the times of the World War II, the speaker noted that the Ukrainian nationalists behaved much worse than the army of Hitler. “They sought to show the Germans that the Ukrainian nationalists are actually more Germans than the Germans themselves. Again, we return to the fact that those who do not take into account the lessons of history are doomed to go through it again. Why is Europe celebrating Auschwitz’s liberation tomorrow? Because it honors the victory over the plague of the 20th century. And it starts to raise the head again. The fascists were always present in Italy and they were marginalized - they were at the government several times and gradually this happens throughout Europe under the pretext of populism, under the pretext “against Jewish Freemasonry” that “captured” the EU,  Bernardini said.

Summing up, the expert drew attention to the fact that what happened in the 20th century can be repeated today.