Ukraine ceases to exist with the tacit consent of the West

From being the largest country in Europe, all that will remain of Ukraine will be its central regions, argues Kate Matberg. Within five years, that remaining part could well become a fully-fledged member of NATO. 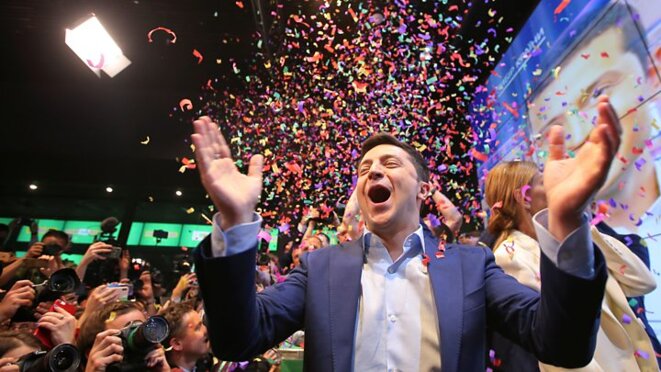 Ukrainian presidential election showed an incredible result. It was the first time in the country's history when the candidate won the election race with such a margin. This candidate was the showman Vladimir Zelensky. Though, it is already quite obvious that the Ukrainians gave their votes rather against Petro Poroshenko, against corruption, political failures and his inability to put an end to the war. Ukrainians wanted a president of a different format, and they got him, without even realizing what it would lead to.

First of all, it should be noted that in Ukraine there is a very ambiguous political situation. The fact is that the inauguration of Zelensky is artificially delayed. At the moment, this is being done through the Central Election Commission, the composition of which was carefully thought out by Petro Poroshenko. In the elections, however, this did not help him, however, the situation changed.

“Now strange things are happening: there is a victory, but no authority,” Zelensky said in his video message. “The CEC is delaying the official announcement of the results so that the Verkhovna Rada can delay the inauguration date for the inauguration to be held after May 27.”

However, in this case a natural question arises: why and who needs it? Zelensky, after all, has already won and it’s meaningless to dispute this fact, especially for Poroshenko. Unless, the former president of Ukraine is behind this, and the goals of the organizers are much amplitudinous.

Back in the run-up to the election, it was reported that criminal cases were brought against Petro Poroshenko in the United States, and Donald Trump increasingly said that Ukrainian officials interfered in the 2016 American election on the side of Hillary Clinton. At first glance it may seem that this is only an attempt to divert public attention from RussiaGate, but Mueller’s investigation failed by itself. Why was it necessary to once again focus on the three-year-old affairs, and delay the invisible stranglehold on the representatives of the Ukrainian government – only now becomes clear. It is not a personal revenge, not that Poroshenko was to some extent a creature of the Obama administration. The fact is that the continued existence of Ukraine, not without the help of its western partners, was in doubt.

It all began last fall, when Petro Poroshenko unilaterally decided to terminate the Treaty of Friendship and Cooperation with Russia. It should be noted that the step was very rash, because the agreement signed in 1997 regulated the issue of the inviolability of the borders existing between the two countries at the time of signing. That is, Kiev not only personally deprived itself of the lever of legal pressure on the Crimean issue, but also gave rise to trends dangerous for the country. This step itself could be regarded from the point of view of the Ukrainian legislation as an encroachment on territorial integrity. And until now, there was only one question left open: who has advised Petro Poroshenko to do that? Now the picture emerges more clearly.

On the eve, Russian President Vladimir Putin took two sensational political steps at once. He ordered the issuance of Russian citizenship to separatists from Eastern Ukraine, and then he even stated on the intention to simplify the issuance of passports to all Ukrainians who wish. In fairness it should be noted that he was not the founder of the idea with regard to Ukraine. So, Poland has been issuing a Pole card to Ukrainians for many years, when Romania and Hungary generally give them passports. With the latter, there was even a scandal when it turned out that the citizens of Ukrainian Transcarpathia massively applied for citizenship in the consulate of Hungary.

But another thing is interesting: did anyone from the West notice a commensurate reaction to Moscow’s actions towards a country that both Washington and Brussels have been called a partner for years? There was no response in Kiev, although, as is known, 5 years ago, the authorities launched an anti-terrorist operation in the east only because of separatist sentiments among the population. What do we see now? Kiev softly aloud asked the West to increase the sanctions pressure on Russia, but the West generally preferred to get by with formal statements.

The situation in Ukraine is as follows. Washington threw a lot of money to support the defense of the Eastern European country, it supported the reforms, but everything was in vain. No results were observed, and Kiev could hardly account for the money spent. Now, the American administration has new plans for Ukraine, which boil down to the principle of “divide and rule”. Why invest in the state, if part of it can be given to the same Hungary? Budapest has long been claiming Transcarpathia. Poland, in turn, is eyeing Lviv. And these are the NATO countries, which mean at their own expense they will use new lands in the interests of the alliance. However, ironically, the restraining factor for them all this time was Russia, because if the Western Ukraine was divided between neighboring countries, then the claims regarding the Crimea would have disappeared to Moscow. Now the situation has changed, and Vladimir Putin voiced his ideas on the country's passporting very timely. And in time, because now Ukraine is actually decapitated.

The Trump administration, threatening Petro Poroshenko with prosecutions for corruption crimes, of which there were many, made him make a deal. It consists in maximally delaying the former power in the country, depriving Zelensky of the need to make serious decisions that may not be the best way to affect his rating. We must understand that Vladimir Zelensky is a very valuable shot. No wonder that the West amicably exulted, calling the elections in Ukraine the most democratic. But the democratically elected president is hardly ready to immediately respond to the actions of the Kremlin. The question is, does he really need to answer them? Judging by his passivity, he is not in a hurry to take office and humbly waits for being allowed to go on the "stage". In the meantime, Petro Poroshenko is still in charge of the country, but even he, although he has always called himself “an opponent of Putin,” is not taking decisive measures. Apparently, this is also part of his deal - not to resist and take the blow because of the actual split of the country, which was conceived in the United States, having bargained with Russia.

Putin did not just so loudly announced passportarisation, because he could follow the example of Romania and Hungary, who do their work secretly. The fact is that it was Moscow that had to be given the role of initiator of the process in exchange for the Crimea and South-East of Ukraine, where, in all likelihood, that same certification will unfold. Following this, the neighboring countries of NATO will join the process, grabbing the western part from Ukraine. As a result, from the largest country in Europe will remain only its central regions, which Zelensky will have to manage.

Of course, it is fair to note that the collapse of the country is not the best way to affect the positions of the now beloved president. But not if he is presented as a victim of the intrigues of his predecessors. Delaying the inauguration, Zelensky is deprived of a chance to dissolve the old parliament ahead of time and now the legislators have all the resources to cut the powers of the president. Then, no one will be able to accuse Zelensky of inaction, and he will hold his presidential term, which, in his own words, will be the only one, distributing the lands of Ukraine to neighboring states as part of some political process. After 5 years, what will remain of the country, deprived of the disputed regions could well become a full-fledged member of NATO.