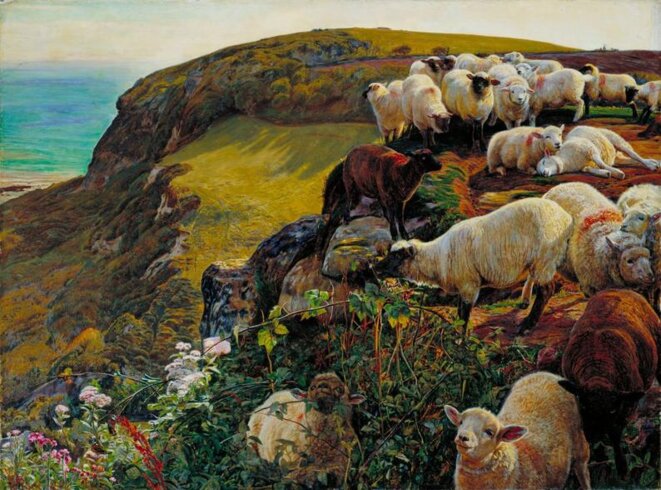 Our English Coasts, 1852 (Strayed Sheep) © William Holman Hunt
Nobody likes to appear ignorant. It is a very strong word to use to describe somebody. I just did so, at length, about a pretty large cross section of Americans —the “Christian Right.”

Yes, ignorance is too strong of a word, and it will certainly anger some people. We don’t want that, so let’s instead think of such things in economic terms. If we refer to two groups of people as haves and have-nots, we mean that the first group are very wealthy and the second group are very poor.

While wealth is not always an indicator of someone’s level of ignorance, it certainly can account for the knowledge gap among the classes, in general. A privileged life is a life of privileged information.

Let’s face it, people with jobs and families are too busy working hard and living a family life to afford the knowledge the wealthy can access, sometimes quite effortlessly. Knowledge is often known but has been kept hidden from the general public, who rely on the media, and it exists almost solely in scholarly works read by few.

Let’s face it, there's certainly no lack of have-nots or ignorance in the U.S. and in the world, on every issue, including ones that have significant impact on individuals' lives.

Let’s get something straight, though. Nobody “falls” for bad information nor is anyone ever lured by deception. Because ignorance itself is somewhat understandable.

Once again, people who prioritize family life, for example, people with jobs and kids, tend not to devote any time to understanding life beyond their own immediate family lives. They simply cannot afford the luxury, on a myopic budget, to stay in a five star hotel with a tremendous world view.

It gets worse. That kind of have-not ignorance can be a slippery slope down hill in the wrong direction. People who don't know much tend not to recognize their ignorance, and so fail to seek better information —the positive correlation between ignorance and confidence.

Even worse, stubborn ignorance is an active effort to dismiss better information that runs counter to their accepted worldview. To alleviate that discomfort, a person has to either alter their worldview or dismiss the new information. Since changing one's worldview is so difficult and so unsettling for some people, these people are often more motivated to dismiss or shut out the new information, instead.

For those people who put family first, choosing ignorance is more comfortable than seeking knowledge. Sadly, they choose to give up their individual free will, unknowingly. Because knowledge, after all, is power. But the path to that individual power is not short for people insulated by families. The distance can be great and they are instead on the couch watching a Hallmark movie.

You know how they say that travel is the best education? Well, if you travel the distance and go to a place like Pakistan, you get first hand proof that the American media’s reports of “Islamic terrorism” are complete lies. Going to Pakistan is not cheap and certainly not a family holiday destination. Thus, one remains ignorant on the peaceful religion of Islam.

Again, sadly, the distance between ignorance and understating is usually long, and the journey costly. And the only two positions in that process that are comfortable for family people are the first, and the last. It takes courage and time to be uncomfortable, sometimes a lot of both. Families deplete individual courage and the time necessary for it.

But there is some good news for America. Although families provide comfort to some, and to go the distance for real knowledge people need to get uncomfortable, U.S. President Donald Trump helped many to cross the Rubicon to having better knowledge, in general.

People who supported Trump, specifically the have-nots, have been willing to get uncomfortable. And in doing so these people gained the important knowledge that the media is pure lies. Lies, lies, lies. Power for the haves is impossible if the have-nots stop believing the haves’ lies.

No matter who is President in 2021, 2020 shrunk the gap between the haves and the have-nots. Better public knowledge is now a direct threat to the status quo of those already in power. It’s gotten a lot harder for them to maintain a society structured to protect their position and privilege.

In regards to the power of knowledge, everyday people have intuitively begun to understand that the medieval feudal system was replaced by patronage and nepotism for the elite and those who are able to buy political favor from the government, schools, and churches of the day.

There’s no magic to it. It’s been the method of dealing with the public since the 14th century. The church and aristocracy worked to keep the masses illiterate and working in the fields to support them. Mass media is owned by today’s “aristocracy” and religions are infiltrated by them.

In their insane hatred for the President, not to mention their vanity, arrogance, incompetence, and downright belligerence, the corporate media, especially those on social media, exposed the knowledge gap between the haves and the have-nots.

The jig is up. Because much of the public were made very uncomfortable for a very long time. People who otherwise had no prior knowledge have now become knowledgeable.