500 Words on Authoritarianism in America

On killing the Mockingbird. 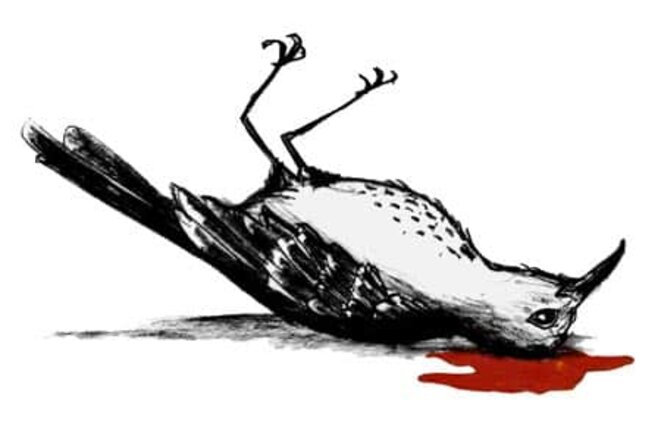 Authoritarianism is typically understood as a form of government that concentrates power in a one party state and represses, oppresses and suppresses its citizens in the name of confronting a supposed “enemy.”


In America, since and including the Cold War, that alleged enemy has been Russia.

Authoritarianism brings to mind the repressive governments of Bolshevik Russia and of Nazi Germany, deploying their massive security apparatus to torture and murder dissidents, jail journalists, rig elections, and shut down courts and legislatures.

This is wrong. We must look at the U.S. today. Authoritarianism can be a feature of capitalism. The U.S. is doing far worse, but the actions are kept secret in the so-called “intelligence community.”

The U.S. Central Intelligence Agency (CIA) is doing even more despicable crimes against humanity than the Bolsheviks and the Nazis did. Disregarding laws and constitutions and systematically engaging in extra-legal and extra-constitutional efforts to eliminate horizontal and vertical checks on their power and perpetuate their rule.

The CIA is easily the most authoritarian (scope, size, funding) organization on the planet.

Most people have heard about authoritarian governments that control the flow of information in their nations. Well, put the U.S. at the top of the list. “Operation Mockingbird” is a “campaign” by the CIA to control what information is being published across the globe.

The CIA created Operation Mockingbird during the Cold War. After WWII, the CIA began “recruiting” any person involved in the media, like journalists, editors, students, etc., to create and spread false information that was just propaganda.

These people were paid handsomely to spread this fake news, too. The CIA also paid third party groups that weren’t in their direct control to spread stories favoring the CIA’s side of events. During the Cold War, the CIA also funded writers to create works demonizing the Soviets.

Although it ran for 30 years, from the 1950s to the 1970s, Operation Mockingbird never officially ended. The conspiracy is alive. Remember, conspiracy by definition is a secret plan by a group to do something unlawful or harmful. Just because the word’s connotation has been tainted by absurd ideas doesn’t mean that it never happens.

Simply put, we do not have a free press in America. Today, the media worldwide (including social media) is under the control of the CIA. This war-time policy of “Operation Mockingbird” was officially reinstated in 2013 under the Obama administration (the Smith-Mundt Act). It is a clandestine but legal operation. It is a conspiracy. And we have not even mentioned Hollywood.

Thankfully, people are waking up to the fact racial authoritarianism has been central to American governance throughout the 20th and early 21st centuries and its connection to the “Russia, Russia, Russia” hysteria in the media. It is state oppression such that certain groups live under extremely divergent experiences of government and laws.

The latest instance of police violence against a black man, the public protests that ensued, and the administration’s response to the protests, show that racism and authoritarianism continue to support one another.

Jim Crow in the southern U.S. was the one instance in our country’s history of blatant American authoritarianism. While the issue of racial authoritarianism is no longer blatant, the issue remains exactly the same. The U.S. has the highest incarceration rate in the world and the incarcerated are disproportionately black.

Despite racial authoritarianism’s glaring presence in experiential accounts of U.S. “democracy,” it has been hiding in plain view in the field of political science.

The media wants you mad, really mad, so you do not recognize that we have two different systems of law in the U.S. —one for the mostly white, rich people, and the other for the majority of Americans. Racial authoritarianism.

What everybody needs to take to heart is that the people in the American media are the most responsible for the racial authoritarianism that is sweeping America today. Our popular culture, the media, reflects the politics and economics of continued black segregation.

Sure, the media is merely the messenger. But this is one of those cases where killing the messenger is a good idea.

To kill the Mockingbird, we must implement a sweeping “Church Committee” type public investigation into the corrupt and criminal activities —including Operation Mockingbird— of the CIA FBI, NSA and so-called “intelligence community.”

Then, we can get to the underlying issue. The CIA is a cult of white supremacy, in the service of capitalism.

Little attention is paid to the despicable efforts of the U.S. intelligence agencies who were determined to neutralize the Civil Rights Movement. Efforts to marginalize and sabotage the success of the Movement have continued for decades, but began to intensify in the 1960s.

Actions taken against the black community during these years included targeting leaders of the Civil Rights Movement, recruiting and deploying black men in conflicts overseas, and destroying black society via the weakening of families and the promotion of a war of the sexes.

Let’s be absolutely clear. The CIA works against Americans ourselves. The Agency is unquestionably anti-American. The CIA is America’s worst enemy.

The Civil Rights Movement never ended, despite the CIA’s attempts to halt it. That is what this is about.

As was the case in the 1960s, there is a deliberate attempt going on to keep blacks back. All of the talk of “Russia, Russia, Russia” in the media is meant to distract from that, just like it was in mid-century America.

Authoritarianism is typically understood as a form of government that concentrates power in a one party state and represses, oppresses and suppresses its citizens in the name of confronting a supposed “enemy.”

We ought to talk about systematic racism and capitalism, and the link between them. This will freak out everybody in power in the U.S. government and corporations and that is the point. We need to address racism and black liberation in the longue durée.

Capitalism is a social construct. It does not exist in nature. It is also not mentioned in the U.S. Constitution. It is a made up thing that has been foisted on us by the people who will benefit from it the most —the elite. Rejecting it means you are rejecting a form of slavery.