SOMETHING SMELLS ROTTEN IN THE STATE OF FRANCE 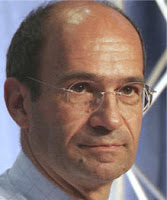 Imagine that an important U.S. cabinet member is also the treasurer and chief fund raiser for the Republican Party. Now imagine that this same pubic servant has a wife who is a financial advisor for a firm that manages the fortune of the wealthiest woman in America. Now imagine that this wealthy woman's butler secretly records telephone conservations between her and her financial advisers indicating that they are involved in massive tax evasion, and that she is discovered to have $100 million stashed away in tax-sheltered Swiss banks accounts. Finally, imagine that this same cabinet member is the key player in pushing through a controversial pension reform that will require his countrymen to tighten their belts and work two years longer before they can retire. How long after these revelations would an American President allow this cabinet member to keep his job? My guess: 24 hours.

But French President Nicolas Sarkozy, faced with precisely this situation, declares that he retains "total and complete" confidence in his embattled Labor Minister, Eric Woerth. Though no one has proved that the Minister or his wife have broken any laws, the strong presumption of conflict of interest, and possible wrongdoing, might preclude a more cautious President from expressing such unconditional loyalty. (Remember how quickly Obama dropped Sen. Tom Daschle as his pick for Secretary of Health and Human Services in 2008 when questions emerged about Daschle's underpaid taxes.)

Here are the facts in the French case:

Woerth's wife, Florence, works for the management company that handles the finances of Liliane Bettencourt, 87, heiress to the l'Oréal fortune. Now Florence Woerth's boss, Patrice de Maistre, is a friend of Eric Woerth (who decorated him with the Legion of Honor last year). De Maistre is just one of Woerth's many friends among the mandarins of France's financial, industrial, and business elite. These contacts are quite useful to Woerth when he dons his fundraising hat as treasurer of Sarkozy's UMP party. Sound complicated? Perhaps a little. Does it raise ethical questions? Big time.

I'd like to think that such a situation in the U.S. would lead to a prompt dismissal or resignation once the facts were revealed. But maybe I'm wrong. Remember Dick Cheney hunting with Supreme Court Justice Antonin Scalia, or his inviting the top honchos of the oil industry to help make U.S. energy policy (while refusing to reveal their names), or his ties to Haliburton at a time when that company was getting major no-bid contracts in Iraq—or, for that matter, Clinton's pardon of fugitive financier Mark Rich. The memory of such shameful episodes makes me reluctant to point my finger at the French. So I'll point it instead to all those public servants who cozy up to wealth and power and show contempt for the interest and opinions of the people they govern. J'accuse!