How Angela Davis Radicalised Me When I Was just 11

Angela Davis radicalised me. I was just 11.

Angela Davis radicalised me. I was just 11. A bored child in the summer. No tv, no internet in Comoros back then. Just me and the immensity of my parents’ library. Summer 1998 ? Not sure but I was still in junior high when I read Women, class, gender. I always thought it belonged to my mum, a women’s rights and political activist but my dad has always been the most radical one, so today I’m not so sure. Because the book was radical. It shifted my perspective. It was the first time a book had such an impact on me. It was after all, my first political read, though it was not the first time I was reading non-fiction from parents’ extensive (and diverse) library. I don’t think I understood all of it. I couldn’t have. But I remember very clearly how she made the work and specific struggles of black women appear in my mind. I knew I was black, and I related to the struggle of black people, considered the civil right movement as an achievement for us all. I considered myself a girl therefore I felt solidarity with all women around the world as being subjected by the same social woes... It never occurred to me that I could be oppressed by other black people nor other women. I re-read the book since and as an adult, the unapologetically leftist stance about class exploitation left a lasting impact on me because of context. In the US, the mildest social policy is seen as the most extreme socialist agenda, I get now how a self-proclaimed communist and former Black Panther could be considered enemy of the state. But at the time, that did not particularly strike me as odd. My parents were leftists, so was I (yes, I know it can seem hard to believe that I was that politicised at 11 but my parents were politicians, I was an avid reader, we watched the news and debriefed what was told together even though I didn’t have a clear political definition of what differentiated left wing from right wing before 13 but that’s another story...) and communism was just a political affiliation like many others (at least in my mind). So there, black women went from being invisible, indistinguishable in the black demographic and the women demographic in my mind to existing in the most active, decisive way.

The closest I was to experiencing a similar enlightenment was when I was introduced to the concept of intersectionality 15 years later at le Camps d’été décolonial. Something of a copernician revolution for me.

My mother then gave me an old copy of Angela Davis, an autobiography as a Christmas gift when I was sixteen. I remember being unimpressed at what appeared like a cheap gift but reading it anyway as a getaway from our apartment in Marseille overcrowded with children cries and holidays tv special blasting loud at every waking hour. I didn’t actually read it, I literally drank it. I immersed myself in the life of this woman and was completely taken and in awe of her courage, her boldness, her intelligence and all that she pursued, fought for, sacrificed to our cause. It seemed to me like she led several lives and in all of them, she appeared brave, uncompromising with her values, whole at the core but yet flexible. Whole because she remained a radical thinker. Flexible because she knew how to transition from a life to another. I was at that moment in life where I was to choose a path to pursue and reading about a woman who made history in her home country, went in exile and started over in a new country, learning the language, getting a degree and recognition in several fields. She was the embodiment of what could be possible for me. The adventure my life could be.

I consider Angela Davis as a spiritual mother. She birthed the political black woman I am today. And since reading her and about her, my feminism, my antiracism, my anticolonialism and my anticapitalism are rooted together and I have never been willing to compromise on any of these stances. Radical. Rooted at the core of these beliefs is that I can only be free when I’m free of all my oppressions. Oppressions based on race, class and gender. 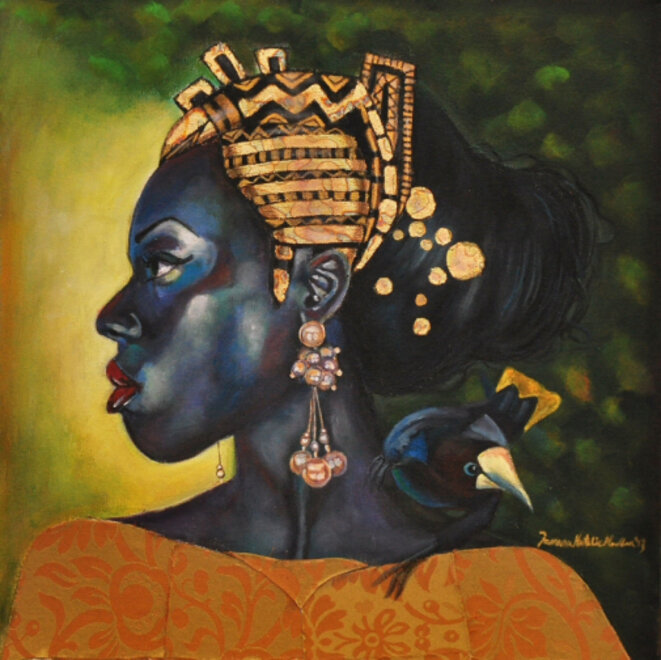