Tariq Ramadan came with a light that helped many of us find peace; a balance that spoke to our souls and allowed us to harmonize the two significant aspects of our identity. 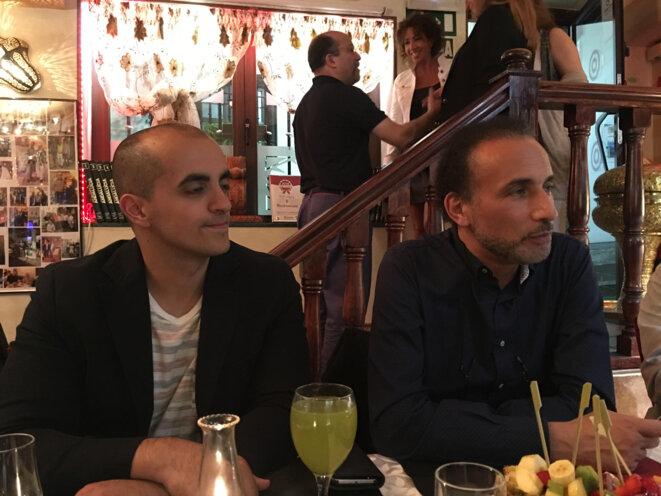 My connection with Dr. Ramadan began long before I met him.

As with many young Muslims coming-of-age in the post-9/11 era, particularly those of us living in the West, times were confusing.

Often, it felt like people were calling you to one of two options:  #1 renounce your religion altogether, or at the very least abandon any aspect of it that contained gravitas, and assimilate or #2 reject the “west” in its entirety and be a “real Muslim”.

Many around us were dismissing them as irreconcilable.

Tariq Ramadan’s was the loudest voices calling us to not only find balance between our European-ness and our Islamic identity and showed us both were complimentary.

Yes, there would be points of disagreement, but this was as natural as it was manageable.

He called on us not to be ashamed of these differences and to be proud of our tradition, all the while calling on us to give to the society around us.

To stop seeing ourselves as guests or visitors to Europe.

When we consider that it is often the clash of these extreme narratives that leads to the catastrophe of terrorism, it would not be hyperbolic to say that Dr. Ramadan’s teachings have been amongst the most significant factors in remedying terrorist tendencies amongst young Muslims in the West.

There is no splitting of the psyche in Dr. Ramadan’s Islam, nor any violent turbulence, or cognitive dissonance; only harmony with ourselves, our societies, and the wider world.

As the years passed, he became the role model to many of us and a symbol of our dignity.

With the Islamic part of our identity being under consistent criticism and at times, debasement and humiliation, the role of Dr. Ramadan as an icon to many of us increased in importance.

At a time when the newspapers were consistently disparaging Islam, he represented us on the biggest arenas, going toe-to-toe with the Sarkozys’, the Hitchens’, and the Dawkins’.

He helped us remember that “Arabness” and Islam are beautiful, something we often forgot under the deluge of negative press being directed towards us.

By first attending one summer school and subsequently being taught a module on Islamic philosophy and theology by him, I was able to experience Dr Ramadan as a teacher.

He consistently challenged us, humored us, and in moments of brilliance, inspired us.

All of the settings in which I saw him were mixed (in terms of gender).

Not only did I never see anything untoward, I never so much as sensed a teaching, a principle or an attitude akin to “either you’re veiled or you are raped”. The disrespect, misogyny, small-mindedness, and aggression, that is embodied in such an attitude could simply not be further from the teachings or the man that I know.

Where I do encounter manifestations of this attitude often is amongst the derogatory orientalist projections put upon us.

Within his teachings and his example, I only found compassion, courtesy, and respect for those around him.

We had the pleasure of hosting Tariq Ramadan for a fundraiser shortly before this issue exploded.

I want to finish this by noting 3 of the things that struck me about what he had to tell us that evening.

Firstly, his fatherly scolding of us for looking at the world in terms of two groups: Muslims and “non-Muslims”. He emphasized that this was reductionist and unnecessarily divisive.

He also called on us to address the arrogance behind labelling others against a significant aspect of yourself or your “in-group”.

Secondly, Tariq Ramadan put out a call for us to be more dynamic and developed than simply offering the Islamic prohibition of interest as a solution to the world’s financial crises.

His belief in the value of Islam is ever-evident as are the  challenges to climb higher and not to settle with where we are now.

Lastly, Dr. Ramadan spoke about the importance of the Palestinian issue.

Like many champions of social justice, he Ramadan is always reminding his listeners of the importance of causes of the oppressed.

What struck me that evening was a realization that I could not recall a time I heard the Tariq Ramadan speaking in public without mentioning the Palestinian cause.

At a time when others are choosing to bypass this issue for the sake of convenience, or their own careers, Dr. Ramadan has been relentless in keeping this cause in mind, and in the minds of millions of his listeners.

Just as crucially, he does not come under the umbrella of those who speak up on Israeli oppression, while ignoring oppression that stems closer to “home”.

Tariq Ramadan’s criticism of Arab regimes earned him “persona non grata” status in different countries across the Middle East. This element of speaking truth to power, despite personal ramifications, is what earned him the love and respect of many.

In these 3 things:  the calls for universality, application of Islam in a dynamic way, and his ever-championing of the cause of the oppressed, I am also reminded of the regrettable fact that many consider Dr.  Ramadan an enemy to them and their machinations.

I have confidence that they will not be able to stifle this important voice.