A Season in Hell: Burning issues in French politics

Nearly 150 years after French poet Arthur Rimbaud’s masterwork, contemporary France is roiled by its own Season in Hell, a deeply fractured and unsettled political moment in which dark phantasms grow large and the path to a better world is anything but clear. Introducing a new series of political analysis from the Rosa-Luxemburg-Stiftung Brussels Office: seasoninhell.eu.

A Season in Hell: Burning issues in French politics

Introducing a new project of the Brussels Office of the Rosa-Luxemburg-Stiftung.

By Andreas Thomsen and Ethan Earle

A Season in Hell, the masterwork of French poet Arthur Rimbaud, was written amidst the conservative backlash to the revolutionary Paris Commune of 1871. From a farmhouse north of the city, the enfant terrible of French poetry ruminated on the failure of his own radical experiment with freedom, and the confusion, disillusionment and doubt that followed. Nearly 150 years later, contemporary France is roiled by its own Season in Hell, a deeply fractured and unsettled political moment in which dark phantasms grow large and the path to a better world is anything but clear.

At stake in this current political conjuncture is no less than the future of the liberal democratic model, and France now serves as an open—and unstable—laboratory for experimentation in the development of whatever comes next. As a political foundation dedicated to supporting the international left, the Rosa-Luxemburg-Stiftung is particularly concerned about the implications for progressive movements throughout Europe and beyond.

In the 2017 presidential election, 40-year old Emmanuel Macron laid waste to a party system that had been remarkably stable throughout the post-war period. His newly created party, La Republique En Marche, promised everything and nothing: no less than the creation of a new politics beyond the strictures of left and right orthodoxy; no more than a slew of contradictory slogans and soaring yet empty rhetoric designed to hook any and everybody who might pledge their allegiance to France’s latest Sun King.

Between 2017 and the 2019 European Union election, Macron managed to devour—and to digest into the body of his political project—both of France’s traditional parties, Les Republicains and the Parti Socialiste. His most significant remaining opposition? None other than Marine Le Pen, longtime heir apparent of the international extreme right and its dark political aspirations.

The consolidation of this seeming binary enhances the status of both Macron and Le Pen: for him, as the reasonable moderate tasked with keeping the darkness at bay; for her, as the champion of ordinary people tired of an elite politics that does not work for them. When viewed as the only legitimate opposition to the other, both neoliberal center and nationalist extreme right grow stronger, and genuine alternatives disappear into the shadows cast by their fire.

This darkness would seem to have enveloped the entirety of what we might consider the left, relegating it to the margins of current political debate. The hope of a united left—first in the form of the Front Gauche and subsequently of Jean-Luc Mélenchon’s La France Insoumise, which came within two points of besting Le Pen and facing off against Macron in the 2017 election—appears to be a thing of the past. It is replaced by a splintered landscape full of aggrieved parties, bitterly divided over issues including the EU and immigration policy, increasingly fighting over ever smaller spaces.

Meanwhile a massive social uprising, formed around the symbol of the yellow vests carried by French motorists, shakes the foundations of the political system. The gilets jaunes, as they are called, number in the hundreds of thousands and have been occupying roundabouts and public squares throughout France every Saturday since 17 November 2018. Originally begun as a protest against a projected rise in fuel taxes, this decentralized uprising has since broadened to include demands for a solidarity tax on wealth, a minimum-wage increase, the implementation of citizens’ referendums, and a host of other measures that defy traditional understandings of the left-right political spectrum.

In the 2017 election, around 19% of surveyed gilets jaunes voted for each of Le Pen and Mélenchon, while only 5% voted for Macron. Then, as well as in the more recent EU election, the real tale has been one of blank votes and abstentionism. Above all, this ideologically diverse uprising of France’s forgotten working classes reminds us that the politics of the country no longer speak, or work, for the majority of ordinary people.

This fact now drives the turbulence roiling French politics. It is an uncertain time, in which many hells are possible, but also possible—as always in such times—is the hope to rise above.

“A Season in Hell” is a project of the Rosa-Luxemburg-Stiftung Brussels Office, which, together with its numerous regional sister offices, its headquarters in Berlin and its broad network of international partners, works to promote progressive analysis, debate and the development of transnational, left-wing political collaboration. As a foreign office located in the capital of the European Union, and currently responsible for thirteen EU countries—including France—RLS Brussels is particularly interested in contributing to the development of a genuinely left-wing European public sphere.

Debates and political mobilizations in the EU’s member states must be linked, and it grows increasingly important for the left forces of Europe to see themselves as part of a transnational left movement. We are united by the crisis of democracy, the rise of right-wing forces, and the overlapping social, economic and ecological crises of our time; and yet the shocks caused by these crises can manifest themselves quite differently from one country to the next. This makes it all the more important to understand political and social developments in countries other than one’s own, and in fact we view this as the only way to develop a complete picture, and thus a deeper understanding, of the current conjuncture.

“A Season in Hell” begins as a series of short, analytic articles that will be iterative in their approach, building on each other, as well as necessarily incomplete in their treatment of a dynamic cluster of issues that continues to develop in real time. The project will grow toward the coming legislative elections of 2020, and ultimately the presidential elections of 2022, likely incorporating other elements such as presentations and debates, hosted both on-line and in Paris and Brussels.

With this project, RLS Brussels aims to shed light on the diabolical tangle that is France’s current political landscape, particularly for leftists beyond the country’s borders and outside the French-speaking world. It has thus far been difficult for the international progressive community to comprehend much of what is happening in French politics: from the widespread collapse of the traditional party system to the political culture of its presidential democracy, the contradictory and remarkably determined protests of the gilets jaunes, the deep divisions of the political left, and the important role of populism across the political spectrum. The articles and contributions presented throughout this project will seek to untangle this knot of issues, because, after all, clarity of understanding is the prerequisite for shared political analysis and shared political action.

If we might conclude on an uplifting note regarding this Season in Hell, it is, quite simply, that seasons change. France’s political climate is no doubt going through a period of turbulence and change, but this too shall pass. Where the system settles, for better or for worse, is not a fait accompli, but rather will be determined through political struggle.

It is here that the Rosa Luxemburg Stiftung seeks to insert itself as an actor of the international left. For while we surely cannot tell the French left what to do, we can share news, analysis and lessons from them with comrades across the world—and vice versa—in hopes that we might join together in our various political struggles, wherever the temperature is rising.

Andreas Thomsen is the director of the Rosa-Luxemburg-Stiftung Brussels Office.

Ethan Earle is a Paris-based political consultant, former program manager at RLS-NYC, and director of this project. 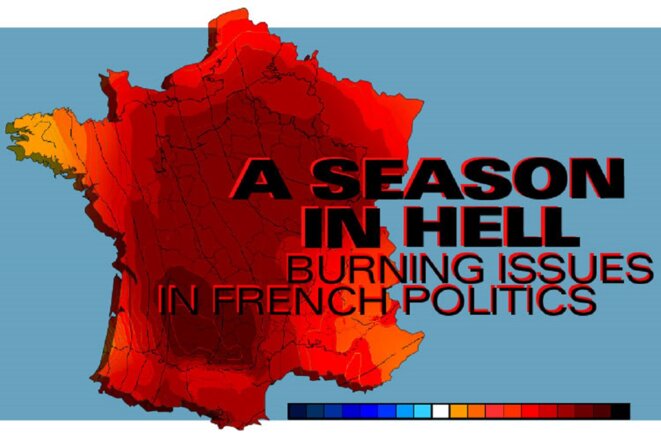