Set in a remote village in the north of Russia, Leviathan tells with tragic beauty the story of Kolya, a car mechanic, in his struggle to prevent the local mayor from expropriating and redeveloping his land. 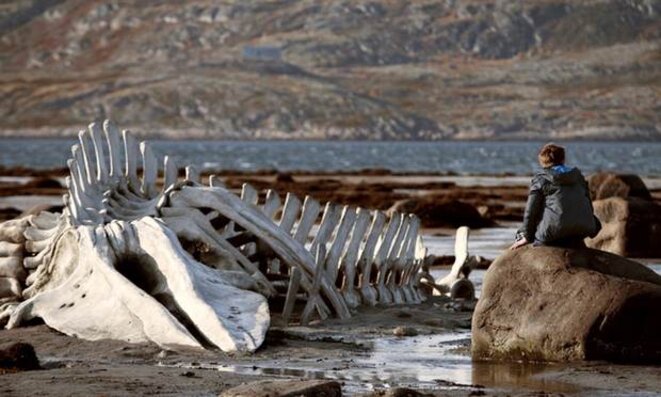 Set in a remote village in the north of Russia, Leviathan tells with tragic beauty the story of Kolya, a car mechanic, in his struggle to prevent the local mayor from expropriating and redeveloping his land.

The struggle serves as a frame for Zvyangintsev’s political account of contemporary Russia. Zvyangintsev’s movie mercilessly portrays the state as a dysfunctional entity that condemns the innocent and protects the rich and the corrupt. It depicts courtrooms as shams, political leaders as thugs and orthodox priests as hypocritical accomplices.

The absence of justice in society is mirrored by the absence of tenderness at home. Solidarity and mutual understanding are rare, and individuals appear to evolve, for the most part, in selfish isolation. Zvyangintsev reveals these rifts in short and bitter ways as when Kolya’s wife, Lilya, reciprocates her husband’s ‘I love you’ with a remote ‘I know’. In that way, Leviathan is therefore far less hopeful than Ken Loach’s Jimmy’s Hall, a movie which shares the same theme of defending one’s rights against a corrupt elite: while the latter believes in the strength of a community uniting to uphold common ideals, the former despairs of a person’s inability to connect with others and prevail over the injustices at hand.

In addition to its political dimension, the movie powerfully explores the religious and philosophical depths of a person’s suffering. Leviathan only shows in passing the dramatic events which unfold, whether it be trials, fights or death. Instead, it concentrates its attention on the effects of those events, in particular on Kolya, and the spiritual questioning which ensues.  In so doing, the movie portrays Kolya as a novel incarnation of Job, the biblical character persecuted by Satan in an agonising test of faith. In the Bible’s Book of Job, the power of the Leviathan, the mythical sea monster, is used by God to humble Job and ultimately save him: Job is convinced of his weakness and comes to accept his inability to understand God’s plan. In Zvyangintsev’s latest movie however, the many Leviathans that crush Kolya leave him lost and despaired – they bear no promise of redemption.

Leviathan succeeds in painting a world at once dark and sublime, where human presence appears precarious and transitory. The movie is framed at its beginning and end by immense and desolate landscapes – frozen fields, empty rivers and colossal waves beating on black rocks. Its colours are for the most part sombre and its music, composed by Philip Glass, majestically obsessive.

In one of the movie’s most striking moments, Kolya’s teenage son, Roma, discovers the immense skeleton of a whale, abandoned on a frozen beach; in a later scene, Lilya has a momentary glimpse of another whale, alive this time, emerging from the sea. Leviathan fascinates by the breadth of its scope and its singular apparitions: the corruption of a community and the suffering of an individual are displayed with the same menacing grace as the decaying carcass of a great whale or a fleeting shadow at sea.