Xi Jinping’s spectacular China Dream has morphed into an unmediated show of fear: the society of the spectacular Incubus. As Debord might have said, its spectacular poverty now presents itself as an immense accumulation of nightmares. (Article based on a chapter in China Imagined: From European Fantasy to Spectacular Power, published, 29 November 2018, by Hurst, London.) 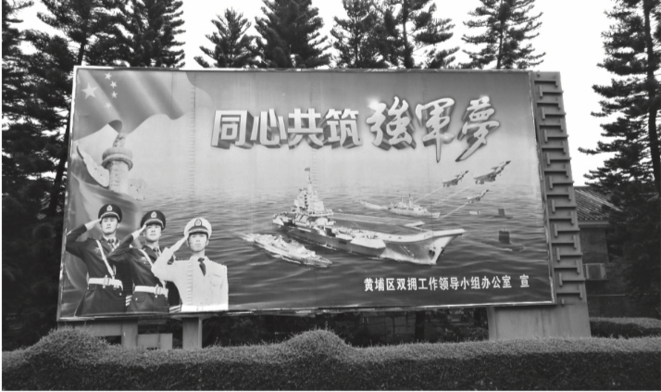 With one heart build together the dream of a strong military, Huangpu, Guangdong, 06/2018 © Gregory B. Lee

From the turn of the twenty-first century onwards, China’s economic power grew massively, and with it a desire to create, control and disseminate its cultural image abroad. This gave rise to a cultural diplomatic offensive to displace long-standing foreign discourses on and about China with a cultural imaginary and historical narrative generated by the Chinese authorities themselves. But at the same time, in China itself, there was contestation of the authorities’ control over society through daily strikes and social unrest. In the cultural sphere, resistance came from the likes of avant-garde artist Ai Weiwei, who, before being allowed to leave China, was under house arrest.1

As we have seen, after the Tiananmen Massacre in 1989— now out of living memory for some 40 per cent of the country’s current population—China’s authorities vigorously advanced the country’s integration into the world technologico-economic system, gaining membership of its major organizations of economic and political power, modernizing the military, preparing to put a person on the moon, and joining the club of nations engaged in the ‘war on terror’. Yet despite these aspirations to global ‘normality’, the government did not manage to control and suppress dissent, and despite all its efforts the Chinese cul- ture that the world most appreciates is not that which is pro- moted and sponsored by the state, but that which is unofficial and fractious. Ai Weiwei has done more to alert the world to the fact that there are really existing creative and concerned Chi- nese than all the Confucius Institutes the authorities have launched around the world. When Ai focuses on non-Chinese subjects, he does great service to those he is directly concerned about—disaster victims, refugees, the excluded—but also foregrounds, and distances himself from, the obsession of the mod- ern Chinese intellectual and artist: China itself, an obsession that has existed for a hundred years or more.2

Ai Weiwei has stood out against particularism, seen the global, common, human interest in the world’s current crises, and demonstrated an understanding of the terrain on which any artist, actor or agent ought to stand. It is not about the object—it is even beyond our relationship with the ‘object’—it is about questioning ourselves. Commenting on his film Human Flow, he said: ‘The refugee crisis is not about refugees, rather, it is about us.’ He continued:

Establishing the understanding that we all belong to one humanity is the most essential step for how we might continue to coexist on this sphere we call Earth ... There are many borders to dismantle, but the most important are the ones within our own hearts and minds—these are the borders that are dividing humanity from itself.

In other words, the focus in a globalized system can no longer be merely on one’s own backyard, because feeding a country is to the detriment of not just another country, but of the planet’s common resources; because today’s comfortable urban dweller is tomorrow’s refugee; because the pollution that rains down rains down on us all.

Within China, dissident voices erupt from time to time, and continue to be silenced by the authorities. In 2014, the central authorities condemned to long prison sentences a number of academics, the most well-known of whom was the Chinese Uighur economist Ilham Tohti. Professor Tohti regularly spoke out to defend the rights of the Uighur minority in Xinjiang and to question the central administration’s policy in this region, but he had never advocated violence, nor the cause of separatism of which he was accused; his criticisms and propositions were based on his academic research, which had been carried out with the utmost rigour.3 On a larger scale, in what became known as the ‘Umbrella Movement’ of 2014, the people of Hong Kong demonstrated en masse their unwillingness to accept the undemocratic future being foisted upon them.

Under the terms of the 1984 Sino-British Joint Declaration, agreed between the PRC and the territory’s former colonial power, Hong Kong is theoretically guaranteed a ‘high degree of autonomy’. The state has reacted to rising political opposition with a crackdown on those Hong Kongers demanding the rights they were promised, and which the Umbrella Revolution sought to defend as the financial district was occupied by protesters. The following year saw the spectacular abduction to mainland China of a group of Hong Kong-based publishers; one of them, Gui Minhai, was a Swedish national, seized by agents of the Chinese state while he was in Thailand.3 During the night of 8–9 February 2016, in what became known as the ‘Fishball Revolution’, Hong Kong youth vigorously defended street-hawkers’ time-honoured practice of selling fish balls in the working-class Mong Kok district during the New Year fes- tivities. Police insensitivity had sparked off welling frustration against the authorities, and protesters and riot police spent the night battling in Hong Kong’s streets—scenes not seen since the anti-British riots of 1967. In 2017, elected legislators were barred from taking up their seats for refusing to take the oath of allegiance to the PRC authorities, and in early 2018 candidates were disqualified from standing for office because their party, Demosisto, advocated self-determination for Hong Kong. In October 2018, the Hongkong-based British journalist Victor Mallet was refused renewal of his work permit, and the following month he was quite simply refused Hongkong visitor’s visa, detained at the airport and obliged to leave the territory. In August Mr Mallet had hosted an event at Hong Kong's Foreign Correspondents’ Club (FCC) at which independence activist Andy Chan had been invited to speak.

In the same period, mainland China has witnessed the continuous harassment and arrests of Chinese human rights activists, the expulsion of foreign NGO workers and journalists who dared to shed light on rights issues, and a continued govern- mental disregard for the political and economic rights of Uighurs and Tibetans. Occasionally, as in mid-2016, when Chinese citizens protested en masse against the construction of a French nuclear waste recycling plant near Shanghai, dissent cannot be crushed so easily.4

All of this contestation contrasted starkly with President Xi Jinping’s heralded pursuit of the consumerist ‘Chinese Dream’, again redolent of 1950s Americanization, which aimed to curry favour with China’s rising middle class. The ‘Dream’, which is largely economic, also involves seducing global part- ners such as the United Kingdom, which hosted a state visit for President Xi in late 2015 amidst the fanfare of a China–UK ‘Golden Partnership’. Moreover, China’s authorities have invested massively abroad in the context of the ‘New Silk Road’ or ‘Belt and Road’, a measure aimed at gaining allies and developing markets. 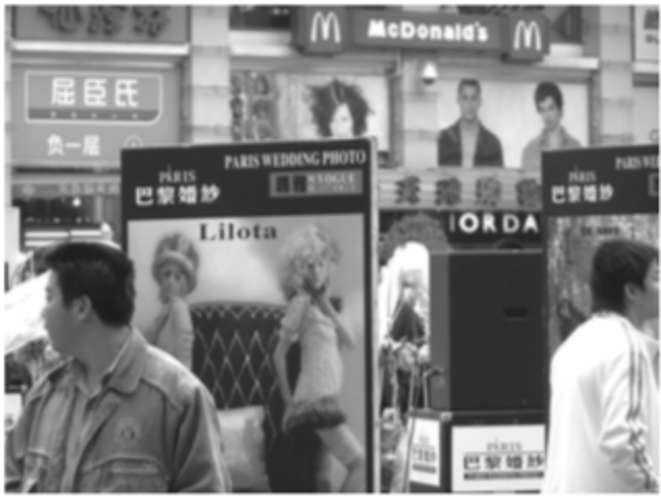 The initial period of President Xi’s mandate can be described as having had a dreamlike quality, in the sense that, economically, a significant nouveau riche middle class was still partially satisfied with the materialism of the Chinese Dream.

However, no capitalist economy is ever immune from inherent, systemic crisis and huge segments of China’s population now realize there is no future for them in this dreamscape. Moreover, the Chinese state has increasingly and openly showed its totalitarian claws both domestically and abroad. At home, never have civil rights been so disrespected since the post- Tiananmen backlash as they have been under Xi Jinping’s reign, and in its foreign relations China’s administration has become increasingly bellicose; witness its increasing presence in the South China Sea.

For hundreds of millions, then, the Chinese Dream has turned to ‘nightmare’. In a flouting of the most minimal respect for the rule of law, individuals are picked off, abducted, and made to recant. In Renaissance Europe, nightmares were associ- ated with the myth of a fiend, called the ‘leaper’, the ‘throttler’, or the ‘Incubus’, from the Latin inculare, ‘to lie down on’. The fiend would lie on its victims in their sleep and suffocate them. Indeed, Xi’s China rather resembles the embryonic England of Kazuo Ishiguro’s The Buried Giant, in which the long-deceased Merlin has cast a spell on a dragon so that it will breathe over the land a mist destroying the inhabitants’ capacity to remember, thus rendering them ignorant and credulous. In twenty-first- century China, a whole generation no longer knows or believes the Tiananmen Massacre actually happened.

A peasant in central Beijing, 2004 © Gregory B. Lee
‘In order to dream, you must first be asleep.’5 More than ever before, the now technologically-equipped Chinese state behaves like a twenty-first-century Incubus as it envelops its citizens, who have been induced into a dream-like sleep, stifled with somniferous propaganda, consumer goods and the prom- ise of a brighter future. Indeed, in the space of a few short years, Xi’s spectacular-dream society has morphed from the promised dream into a tightly controlled, technology-intensive, nightmare society, what we might term the Society of the Spectacular Incubus, in which regnant power smothers the popu- lace with electronic surveillance, violently throttles dissenters, and pursues a policy of aggressive undiplomacy towards its international neighbours.

With Xi Jinping Thought enshrined in the constitution of the Communist Party of China, and his effectively being made president-for-life by a March 2018 state constitutional amendment, the situation seems unlikely to improve in the near future, despite the wishful thinking of the West’s China-watchers. As Ellul reminded us as far back as the 1980s, there ‘never was any liberalization and the new political tendency has nothing to do with liberty.’

In 1968, Debord wrote of the ‘spectacle’ as ‘the diplomatic representation of hierarchic society to itself, where all other expression is banned’, and observed that ‘the most modern is also the most archaic.’ In the second decade of the twenty-first century, ‘diplomatic representation’ has become most undiplomatic. A new form of political show is now widespread. It involves a set of practices that are common currency not only in China, but also in Russia and Turkey. The conduct of these countries’ foreign policies has become no more than a virulent form of ‘hoodlum diplomacy’, and the power that is meant to counter such behaviour, the United States, has been under Donald Trump’s administration little better.

The dream-spectacle phase of global politics started to disintegrate barely twenty years after George Bush Senior’s declaration of a ‘new world order’. In Europe and America, increasing popular disillusionment expressed itself in forms of nationalistic identitarian politics; in re-emergent racist and anti-immigrant ideologies; in neofascist and populist political parties gaining electoral ground; in the disastrous consequences of Western-engineered upheaval in Libya, Iraq, Iran, Afghani- stan and Syria, resulting in a migration crisis unparalleled since World War II; and in ‘home-grown’ Islamist jihadists engaging in terror in the West. The enchantment of the dream has been seriously undermined in the popular imagination.

The dream-turned-nightmare of the technical, the techno- logical and the economic now serves only the aggrandizement of the state and its ambitions of political and territorial expansion, whether in the South China Sea or on the Ukrainian borderlands. The spectacle of dreams has mutated systemically into an unmediated show of fear: the society of the spectacular Incubus. The systemic demon that tyrannizes and subjugates—the seductive and phoney harmony of the first decade of the twenty-first century, the long-cherished and nourished simulacrum of normality—has spawned a night- mare society of ‘enriched privation’, marked by technologically-maintained insecurity, fear and brutality. As Debord might have said, the spectacular poverty of those societies in which the convergence of totalitarianism with the technologico-economic system prevails now presents itself as an immense accumulation of nightmares.