On January 22 a telling leak cropped up in the Internet. British defense contractor’s BRITAM server was hacked and megabytes of classified internal files of the firm were released to the public. Now the case is acquiring a Britamgate scale due to the publication on Prison Planet. What is the story behind the leakage? Why this scandal is likely to turn around the situation in Syria?

Let’s brief the files. The key finding is a mail dated December 24, 2012 sent by Britam Defence’s Business Development Director David Goulding to Dynamic Director of the firm Phillip Doughty, who is a former SAS officer: 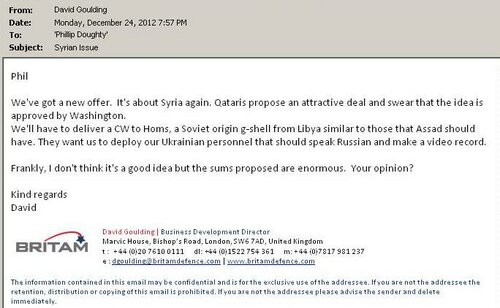 We’ve got a new offer. It’s about Syria again. Qataris propose an attractive deal and swear that the idea is approved by Washington.

We’ll have to deliver a CW to Homs, a Soviet origin g-shell from Libya similar to those that Assad should have. They want us to deploy our Ukrainian personnel that should speak Russian and make a video record.

Frankly, I don’t think it’s a good idea but the sums proposed are enormous. Your opinion?

To clarify the things, CW is a standard abbreviation for Chemical Weapons; ‘g-shell’ is a bomb consisting of an explosive projectile filled with toxic gas.

Taking into account the memorable Barack Obama’s warning that the ‘use or even transportation of chemical weapons by the Assad regime would represent a “red line” that would precipitate military intervention’, a message he reiterated last month after the election to the second term, the plotted operation, if carried out, would provide an ideal pretext for the foreign intervention into Syria. Israel has voiced the same warnings last week.

Who would perpetrate the video-recorded delivery of CWs to Homs? The text of mail clearly indicates that they would use Britam’s Ukrainian personnel for forging videos. Scrolling down one of the hacked files, (Britam HRM Expat Data Load Sheet August 2012.xlsx) we found out the private data of 58 Ukrainian citizens working for Britam Defence Ltd in Iraq. Several employees might not be enlisted as the folder /Iraq/People/ contained the photocopies of passports of several other Ukrainians. There are also some Serbs/Croatians and Georgians in the list who also might be filmed as ‘Russians’. 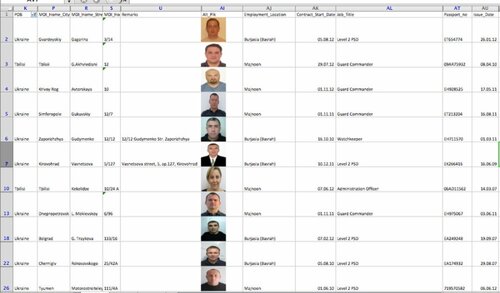 Since the end of December 2012 Western, Israeli and Gulf sources have been playing up ‘rumors’ about ‘Russian troops fighting for Assad’ and ‘Russian forces taking Syrian C&B weapons under control’. The Kuwaiti newspaper Al-Seyassah has recently published a couple of ‘Western intelligence reports’ stating that ‘Assad had already transferred chemical weapons to the terrorists’. On January 15 the US Foreign Policy journal made public a ‘secret State Department cable’ concluding that ‘the Syrian military likely used chemical weapons against its own people in a deadly attack last month’.

Most likely the public opinion is being prepared for the ‘breathtaking videos’ depicting Russian-uniformed or Russian-speaking ‘soldiers’ allegedly committing atrocities against civilians in the Syrian cities or applying toxic gases there.

In this context we should not forget the reports circulating since last year that the rebel fighters in Syria had been given gas masks and were willing to stage a chemical weapons attack which would then be blamed on the Assad regime to grease the skids for NATO military intervention.

The information about Western and Middle East special services recruiting militants with Slavic features to play a role of Russian ‘mercenaries’ allegedly captured by Syrian opposition fighters was released by the Russian media in the middle of January. They quoted a well-informed source as saying that ‘actors’ are being selected in Russia, Belarus and Ukraine. They all must handle guns and able to operate anti-aircraft systems. According to the script, they should recognize in front of the cameras that they were recruited by the Russian special services with the aim of supporting the army of Bashar Assad. Also, they ought to say that they have allegedly been delivered to Syria by Russian warships.

According to the source, all this will be filmed in Turkey or Jordan, where fake demolished Syrian towns have already been built in the form of large-scale theatrical scenery. The same-type sceneries in Qatar were reportedly used during the information warfare against Libya in 2011.

Summing up these facts we can conclude that a provocation in Syria is the only option left for the war-mongers. Having exhaustive information on the real situation in Syria and being aware of inability of the corrupted rebel group to make any significant change in Damascus, they have nothing to do but hire a second-rate British PSC for another round of dirty job. We have no doubt that numerous tragic ‘revelations’ of atrocities committed by ‘pro-Assad army’ that were repeatedly hitting YouTube for the last two years, were also ‘ordered’ for enormous fee to the former British ‘berets’. The latest leakage deserves thorough investigation and consideration on the top international political level. It is time for a BRITAMGATE to be boxed.