Welcoming the Ends of the World

An Interview with philosopher Déborah Danowski about the problem that “there are too few people with too much world, and too many people with way too little”. 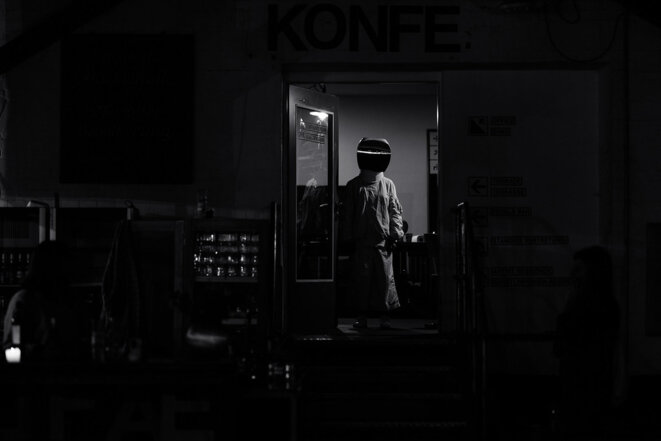 SAZAE Bot performance at the Berliner Gazette conference “Ambient Revolts”, 2018 © Norman Posselt, CC BY 4.0
The Brazilian philosophers Déborah Danowski and Eduardo Viveiros de Castro have written an enormous book entitled “The Ends of the World”, which is of great importance to the MORE WORLD project that the Berliner Gazette is pursuing in its 20th year. They write, for instance, very incisively that “the problem above all is that there are too few people with too much world, and too many people with way too little.” With planetary challenges such as climate change in view, this diagnosis points last but not least to the hidden potential of the many, many people with way too little world. What if all of us had more world? What if the end of the world as we know it introduces this very opportunity of changing the unequal distribution of access to the world?

Krystian Woznicki: To begin with, could you explain what you mean by saying that “the problem above all is that there are too few people with too much world, and too many people with way too little”?

Déborah Danowski: In "The Ends of the World" we have shown that “world” can have many different meanings, and that consequently there are many different ways of losing the world. But it can be said, in a general way, that the loss of a world is the breaking of the fundamental relationship between a subject or a people and their world. This can happen either as simplification and impoverishment (cultural, ecological or ontological), or, in extreme cases, as death and extinction. And both are linked, since impoverishment (say, of a culture or a biome) can lead to physical extinction, and this (say, the disappearance of a people or the extinction of a species) also implies the extinction of a perspective, of a unique and irreplaceable mode of existence, therefore, an impoverishment of the world.

The main motive of the book was, of course, the environmental catastrophe that we have before us, and it has this unique characteristic, which is that it will begin by striking most strongly and devastatingly the poorest countries and populations, but will eventually reach everyone, not only every human, but most of the other living beings on Earth. This means that there is a generalization of the process of reduction and extermination of worlds that has always been the basis of so-called modernization, especially since the colonization of the Americas and, more recently, globalization. As we know, if today four earths are needed to meet the energy and material demands of the planet, it is not because of the large population of Third World countries, but mainly because of the high standard of living of most countries in Europe and the United States. (China is changing this scenario a little, but it is still far from the per capita consumption of those countries.) To enable the wealth of a richest minority in these countries, many others live in an impoverished world, many are losing or have already lost their world. Anthropogenic climate changes only radically amplify what is already a reality for them.

KW: How is your thinking here informed by a perspective from the Global South?

DD: You are right, I believe that having a Global South perspective gives us greater clarity as to what awaits us. I may be overly pessimistic right now because of Brazil's current political-economic situation, but we always seem to be on the brink of chaos and barbarism. Ecological disasters are rarely prevented or repaired, but rather they pile up. So we usually don’t expect much from the authorities. Far-reaching prevention measures are not for everyone, and we get a good idea of ​​all that can go wrong in the rare and precarious adaptation actions by the state. We know we have to manage on our own.

KW: Many responses to climate change go hand in hand with revitalizing the idea that “the West is the universal norm”. What does it mean for you to challenge this paradigm? How can other conversations on global warming and other forms of communal rationality enter the conversation and guide us out of the climate change crisis that is also a crisis of the world as constructed by the West?

DD: Without doubt most of those who take climate change seriously want to preserve our model of society, or at least the best part of it, perhaps what you are calling the "universal norm" of the West. What I find curious about this phenomenon is that deep down many people usually think, first, that this is what everyone would like to have, and, secondly, that it is within our reach to choose what we want to keep in the coming world and won’t give up. But, as I said just now, this "universal norm" of the West has never worked very well for anyone except for the elites, and now more than ever it is evident that it is going wrong for everyone.

In addition, with climate change we are entering a completely different world from the one we have today, and perhaps even completely different from what any human being has ever known. What we will be as a society is something that does not exist yet, which has yet to be invented. So I do not think it's a question of choice, but of invention, of collective creation. Be that as it may, it is well to emphasize that neither cutting-edge technologies nor a communal rationality, will help us get out of the climate crisis. The Anthropocene is here to stay. What we can do is strive to preserve interstices, refuges, and enable ways of life to flourish, that are not submissive to this norm. That is why it’s so important to cultivate communal, non-ecocidal, and just practices. And to refuse the state of ontological exception in which we western and modern humans assume ourselves to be the only ones capable of accessing the truth that all must accept.

KW: If we take non-Western conversations on global warming into account, what sources of inspiration appear on the radar? Which future pasts become relevant?

DD: There are all kinds of inspirations. Not just those coming from the 370 million people whom the UN regards as indigenous (that is, as we said in "The Ends of the World", members of peoples who do not recognize themselves and/or are not recognized as standard citizens of nation states), but also from collectives that are resisting being swallowed up by the dominant, exclusionary and unjust Western logic. Initiatives such as the occupations of the ZADs in France, the experimenter farmers of the semi-arid region of the Brazilian Northeast, reclaiming practices such as wikas and technoxamanism, traditional midwives, community currencies, autonomy collectives, communal health care, community seed banks and creole seeds keepers, urban agriculture and many others.

DD: As I said before, what we will become as a society is something that has yet to be invented collectively. In this sense, the term "inspiration" is the most appropriate, as there are no ready-made models that we can follow in an environment so different from and worse than ours. Indigenous communities all around the Earth are concerned about the fall of the sky and other forms of the "end of the world" and we can learn from indigenous peoples different ways of thinking about what surrounds us. We can learn to be careful about where we step and how we relate to other beings, because anything around us can be an agent just as we are, a subject, a person, who wants to exist and remain in existence, and who does not necessarily think like us. We can learn to get rid of this obsession that we are not only different from all other animals, but are the only real subjects, the only ones with a moral sense, endowed with reason, and therefore the best and smartest in the universe. This same bipartition which instituted modernity has always served to torment not only nonhumans, but those humans whom the West considers to be of less value, to be “poor in world” or "worldless" and therefore exploitable, disposable, or even killable without shame.

KW: Summing up our conversation and taking it a step further: In what sense do you think of the end of the world as the beginning of a new world?

DD: An entirely new world, even if we so desired, is impossible. Anthropogenic changes in the climate system and other environmental damages have diverted us from the macro-course of the Holocene in which our civilization was formed. According to some recent studies, it has even deviated us (i.e. the present phase of the Earth) from the glacial-interglacial cycle of the late Quaternary Period. Depending on our trajectory, this departure can become more or less severe (and we should do everything possible to make it less severe) but cannot be overridden or undone. However, every end of the world, unless it is an absolute end (as the philosopher Günther Anders imagined a total nuclear war would be), is necessarily also a beginning. Or, at least, every thought of the end of the world presupposes / implies the thought not only of the beginning of this ending world, but of a new beginning.

But this new beginning is not the beginning of another world, posterior and external to this current world of ours, but rather the invention of new ways of living with what we have, in the ruins of the present world. This is actually how we are already living today, and this is the way in which the Amerindians, who were almost exterminated at the time of the "great discoveries", have learned to reinvent their worlds in order to live in the world of their invaders. This is how many people live on all continents, billions of "dispossessed", climate refugees, wild animals and even plants suffocated under the asphalt of a large city, or rivers channeled or barred by large hydroelectric dams. I’d like to end with the words that close the beautiful film by Charles Laughton, The Night of the Hunter, from 1955, "The wind blows and the rain's a-cold. Yet they abide ... They abide and they endure."

The BG’s 20th anniversary project MORE WORLD invites you to explore together cooperative practices that tackle climate change. To this end, the BG will organize a big conference at the end of the year, offering a diverse program of workshops bringing together people from more than 25 countries. The call for registration invites you to join the workshops. Further information can be found on this website: more-world.berlinergazette.de

Déborah Danowski is Professor of Philosophy at the Pontifical Catholic University of Rio de Janeiro. Her book "The Ends of the World", co-written with Eduardo Viveiros Castro, was published by Polity Press, 2017. Translated into many languages, the German version has just been published by Matthes & Seitz under the title "In welcher Welt leben?" (2019).

À propos du blog
Berliner Gazette (BG) is a nonprofit and nonpartisan team of journalists, researchers, artists and coders. We experiment with and analyze emerging cultural as well as political practices. Since 1999 we… have been publishing berlinergazette.de under a Creative Commons License – with more than 1,000 contributors from all over the world – as well as organizing conferences and editing books.