I share the report i've sent To the United Nations Human Right, and to the Special Rapporteur on Torture and Other Cruel, Inhuman or Degradind Treatment or Punishment. I tried to expose the No-touch torture, the gang-stalking and electromagnetic harrassment, even if it's not the first time*.

===>This current report aims to explore some of the predominant psychosocial dynamics which, in practice, tend to undermine, circumvent or even paralyse institutional checks and balances, thereby creating environments of unchecked power conducive not only to corruption but also to torture and ill-treatment

My contribution will speak about Gang stalking, which is a form of community mobbing, organized stalking and electromagnetic torture combined.

*It's not the first report about this subject: in 2013, a French association have already sent a report, with différents documents and evidences , to one of a previous rapporteur.

Some people describe it as a psychological and electromagnetic attack that can completely destroy a person’s life, while leaving little or no evidence to incriminate the perpetrators.
It’s an No-Touch torture.

The goal is to isolate the targets, make them destitute, make them homeless and jobless, and torture them with electromagnetic weapon, aiming to drive the target to illness or suicide. There is also a constant campaign of deprivation sleep.
The gang stalkers can be found in every level of the society, every race, religions, communities. It is seems to be seen for many people as a game, a sport to be played with another individuals life. Many do not understand or care that the consequence of this game is destroying a human being.
The methods used against targets individuals are different, it’s a MIX of different methods, repeated every single day:
- Mobbing and gaslighting
- Harassment
- Constant surveillance (following the target, but also read her letters, bugging targets phone, house, computer activity)
- Isolation by slander campaign and lies,
- The theft of the target’s money on her bank account without explanation, The theft of her heritage, the theft of her intellectual property, the theft of every part of the target’s life. Despite the evidence, you don’t get justice because you became a Non investigate person.
- organize a daily harassment with false accusation or body shaming
- Identity spoofing and all the consequences…
- Electromagnetic aggression and torture with microwave, electromagnetic, acoustic and psychotronic weapon (the same used during the American embassy attack at Cuba,). They can cause diseases, injuries and even death, sometimes in a very short time.
It’s not an exhaustive list, but since the victims begin to complain, her psychiatrization and criminalization is organized, despite any medical and legal advice or any evidence of her guilty.
The more the target is isolated and bigger is the risk.

I) Psycho-social dynamics conducive to torture and ill-treatment

People who persist in denouncing the torture described above are pushed toward psychiatrization and ill-treatment, and this process completely discredit them in their research of justice. It’s an double injustice.

There are several psychosocial dynamics involved, including:

A) The manufacture of consent, through civil obedience, the need to belong to a strong and dominant group and the fear of rejection.
B) Social catharsis, via the creation of a scapegoat
C) Disintegration of solidarities and dismantling of intermediate bodies (association, family, communities…)

A) The need for conformism and belonging to a predominant group can incite a group of persons to accept the worst, in certain circumstances. The most convincing example is the Milgram’s experience, who showed how torture can be accepted by the most part of people, since an Authority assumes the responsibility of the orders.
This can lead to group-based moral disengagement, and the emergence of a negative group dynamic. This process can allow a mass surveillance, group control and torture. According to some leaders of the ex Stasi, it just takes 1% of a population complicity in spying, to control a whole population.
This process is the same for the gang-stalking and electromagnetic torture. It can be practiced, with the same efficiency at the level of a small neighborhood of local mafia, an administration, a village, an hospital, an international organization…

B) This process works because it appeals to our worst instincts and need of catharsis. The target or the victims is a scapegoat and has this social function of allowing the evacuation of aggressiveness, deviance towards a chosen and pre-defined target, without consequences for the attackers.
It also brings the group together: During this harassment, a disparate group whose elements perhaps clashed, will be united. It creates a social peace.
The sacrificed victim is harassed, and punished for this harassment, not only by not obtaining justice but also by internment and criminalization.
Gang stalking’s techniques is directed with the aim of mimicking or generating symptoms of specific diseases. The use of some technologies or sound transmissions can mimic in people not aware to NICT, the symptoms of schizophrenia, even if what is seen and heard is real. Many things are possible, especially in the electromagnetic fief and a lot of people are not aware of that.

C) The intermediate bodies are the intermediate institutions between the state and the individual, such as the family, religious group, communities, associations…
They are intended to serve as an intermediary between the state and the individual and serve as a protection for an individual.
But in the case of torture linked to gang stalking and electromagnetic harassment, these intermediate bodies are diverted from their function and involved in the victim’s attacks, instead of protecting them.
Victim’s isolation seems to be both a criterion of choice for targeting a victim and a consequence of this targeting. The entourage is either put to contribution, or threatened or even eliminated, in order to represent no possible help for the target.
All civil society does not participate, but the apathy of the spectators is so deep that there is a generalized form of consensus, allowing the perpetration of these tortures.
This apathy was prepared, according to me, by 20 long years of society of spectacle, and in particular with telereality show, wish trivialized voyeurism, pushing it to its climax by creating a cold distance from those who observe to those who are observed and even tortured.
Gang stalking is an addictive behavior and a form of entertainment for the stalkers, who can feel a vicious kind of pleasure by bullying their victim. Like our society’s current obsession with reality TV, this activity, which is also an calculate and vicious hate crime, will gain, this next years, in popularity as the ultimate experience of reality entertainment. Guy Debord wrote about this kind of Société du spectacle (in French).

II) My personal experience as a target tortured

My experience of gang stalking and electromagnetic harassment is quite short (2 years) but very difficult. I’m a mother of 3 children, single (never married or in commitment) and graduated from higher education. I won’t detail my experience here, but you can read it in my Mediapart’s blog with this following link:
https://blogs.mediapart.fr/eugenie-lobe/blog/261117/harcelement-en-reseau

Concerning the psychosocial dynamics, the most difficult in this daily torture is the total lack of perspective and recourse, because of the omerta that prevails on this subject. The media do not talk about this phenomenon. This specific kind of crime do not have its own legal characterization in France. Investigations are not ever conducted despite the evidence, and complaints are systematically closed, by both Police and Justice.
Intermediate bodies, such a as family, association, religious groups, communities can be involved in this gang-stalking and electromagnetic harassment because of their proximity with the target. They can make false accusations, false evidence et false testimony, instead of helping the victims as they are supposed to do.
Even though you don’t have, just like me, any psychiatric history and your record has always been blank, you can be illegally worried by a threat of psychiatrization or criminalization.

Many victims may be much more relevant than I am on this subject, but according to me, we should at least focus on these two aspects, as a priority:

- Given the complexity of the techniques used in the context of electromagnetic harassment, often Secret Defense classes, the burden of proof should be reversed. So that it is no longer the victim who has to provide technical evidence because there is an obvious information asymmetry.

-Stop the target’s internment or criminalization whit false testimony and false evidence, in order to silence the targets. They’re both victims and whistleblowers: they must be protected.

- Update of a system of corruption and generalized clientelism, which makes impossible any separation of powers (a fundamental democratic principle in France). There is an interpenetration between the political and economic environments, and the institutions are no longer fulfilling their role. We are witnessing a two-speed justice, whereas it was still the last bastion of resistance a few years ago. Functional justice would end the impunity of these criminals.

Thanks you for your attention. 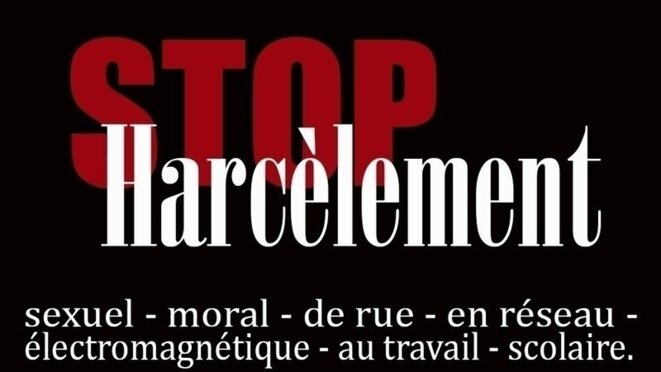