Op-Ed in Le Monde: "Against Covid-19, we must ensure access to vaccines in Africa"

We are publishing here, the English translation, of the Op-ed we co-signed. This op-ed was initially published in the edition of Le Monde dated of Tuesday, January 19, 2021 and entitled: "Against Covid-19, we must ensure access to vaccines in Africa"

A group of personalities, including the philosopher Cynthia Fleury and the economist Thomas Piketty, pleads, in Le Monde, for Africa, which is facing a potentially major crisis, to have urgent access to the latest medical innovations against the pandemic, in particular vaccines. 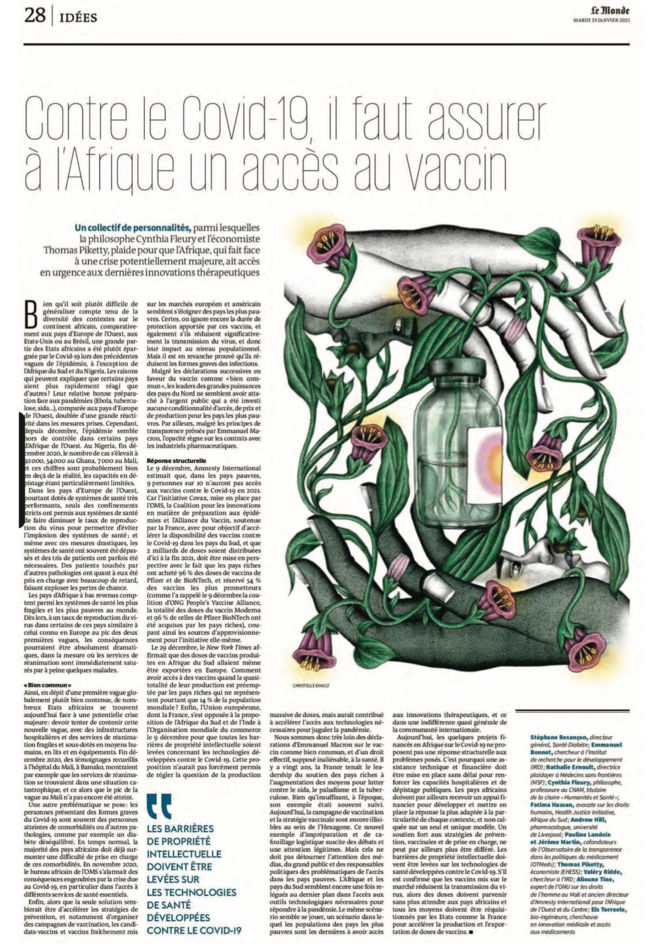 "Against Covid-19, we must ensure access to vaccines in Africa"

Op-Ed. Although it would be inaccurate to generalize given the diversity of contexts, a large part of African states have been rather spared from previous waves of COVID-19. The reasons for explaining it? The relative good preparedness of certain countries to pandemics (Ebola, tuberculosis, HIV/aids, etc.), as well as great responsiveness in the measures taken.

However, since December, the epidemic seems to be accelerating in several West African countries. In Nigeria, at the end of December, the number of cases reached 92,000, 54,000 in Ghana, and 7,000 in Mali, and the figures seem far below reality, as screening capacities remain limited. These countries count among the most fragile and under-resourced health systems in the world. Thus, despite a first wave that was generally rather well contained, many African states are now facing a potential major crisis: containing this new wave, with fragile and under-resourced hospital infrastructures and intensive care services, in human resources, beds and equipment. At the end of December, testimonies collected at the hospital of Mali in Bamako showed, for example, that the intensive care services were in a catastrophic situation, and this while « the top of the curve » in Mali has not yet been reached. Therefore, if these countries were to face a major wave, the consequences could be dramatic, as intensive care services are immediately saturated with just a few patients.

Another problem arises: people with severe forms of COVID-19 are often affected by other pathologies, such as unbalanced diabetes. And in normal times, the majority of African countries must already overcome difficulties in providing healthcare for these pathologies. Last November, the WHO African office was alarmed at the consequences of the COVID-19 crisis, in particular in access to various essential health services.

Thus, while the heart of the response would seem to be to accelerate prevention strategies, and in particular to organize vaccination campaigns, vaccine candidates, and vaccines freshly marketed on the European and American markets seem to be very far away from people in these low-income countries. Of course, we still do not know the duration of immunization provided by these vaccines, nor whether they significantly reduce the transmission of the virus, and therefore their impact at the populational level. But on the other hand, we know that they have shown to reduce severe forms of infections.

Thus, despite the declarations in favor of the vaccine as a "common good", the leaders of the northern countries do not seem to have attached to the public money which has been invested any conditionality of price, production and access to them for low-and-middle income countries. Despite the principles of transparency advocated by Emmanuel Macron, opacity reigns over contracts with pharmaceutical companies. In December, Amnesty International estimated that in low-income countries, 9 out of 10 people will not have access to COVID-19 vaccines in 2021. The objective of the COVAX initiative, set up by the WHO jointly with CEPI and GAVI is to accelerate the availability of COVID-19 vaccines in global south countries and that 2 billion doses be distributed by end of 2021. It must be put into perspective with the fact that rich countries bought 96% of vaccine doses from Pfizer and BioNTech, and reserved 54% of the most promising vaccines, thus cutting off sources of supply for the COVAX initiative itself. On December 29, the New York Times claimed that doses of vaccines produced in South Africa would even be exported to Europe. How to have access to vaccines when almost all of their production is pre-empted by the rich countries which nevertheless represent only 14% of the world population? In addition, the European Union, including France, opposed South Africa and India’s proposal to the World Trade Organization (WTO) on December 9, calling on for all intellectual property rights barriers to be waived on COVID-19 technologies. This proposal would not necessarily have solved the issue of mass production of doses, but would have helped to accelerate access to the technologies necessary to contain the pandemic.

We are therefore far from Emmanuel Macron’s declarations on the vaccine as a common good, and from an effective, supposedly inalienable right to health. Africa and the countries of the South still seem to be relegated to be the least in accessing the technological tools necessary to respond to the pandemic. The same scenario seems to play again, in which the populations of low-and-middle countries are the last to have access to therapeutic innovations, and this in an almost general indifference of the international community.

Currently, the few projects funded on COVID-19 in Africa do not offer a structural answer to the challenges. This is why technical and financial assistance must be put in place without delay to strengthen public hospital and screening capacities of countries. Countries must receive financial support to develop and implement their response; the most suitable for the particularity of each context, and not based on a single model. Strong support for prevention, vaccination and management strategies can no longer be postponed. Intellectual property barriers must be waived on COVID-19 technologies, including vaccines, and if those are confirmed to reduce transmission of the virus, then doses must reach African countries and all countries without further delay. And all means must be requisitioned by states like France to speed up their production and export.