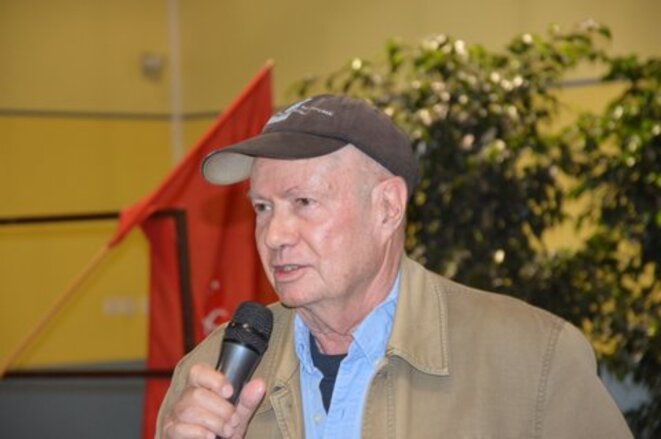 The Sword of the Old Le Pen and the Islamist Sword

About the Sword of Old Le Pen, the "Strange Cocktail of Dad's Big Girl", the Young Marion "Maréchal Pétain, Here we Are" and finally the Abominable Islamic Boomerang!

The Sword of the Old Le Pen and the Islamist Sword

Before getting to the heart of the matter, we strongly and forcefully affirm that we condemn the despicable Islamist attacks. We also condemn colonialism in general, as a crime against humanity, and we condemn in particular the colonialist crime of the Algerian War.

The sword of old Le Pen has quite a history!

"The honorary president of the National Front lost this dagger in the Kasbah of Algiers fifty seven years ago. During the night of 2 to 3 March 1957, a patrol of about twenty parachutists led by a tall, strong and blond man, whom his subordinates called 'my lieutenant', burst into the Moulay family home, (Le Monde, 4 May 2002).
For several hours, the father, Ahmed, aged 42, is going to be tortured before the eyes of his six children and his young wife, who is carrying his newborn baby in her arms. He is tortured with water and then with electricity. Ahmed Moulay refuses to give the names of his FLN network. He will die as a result.

Le Pen and the parachutists leave after having riddled the body of their victim with a burst of machine-gun fire. This stratagem will allow the French army to issue a communiqué stating that Ahmed Moulay 'tried to escape'.

On the morning of March 3, the eldest son of the victim, Mohamed Cherif, 12, made a discovery in the entrance corridor of the house: a dagger on the ground in a dark corner. He grabs it and hides it in the closet of the electricity meter, "without really knowing why". The next day and the day after, Le Pen and his men returned and ransacked the Moulay house. They are looking for something. In vain. The child is silent.

A few weeks later, the photo of the blond lieutenant appeared on the front page of the Algerian press. He stands at attention in front of General Massu, who presents him with the cross of military valour. His name is spelled out in full: Jean-Marie Le Pen. The then Poujadist deputy and youngest member of the National Assembly volunteered for six months in Algeria".

Shortly after the tragedy, Mohamed Cherif dropped out of school and joined the ranks of the Liberation Army (ALN). He seeks only to avenge his father and will remain in the maquis until independence. In 1962, he was the youngest of the mujahideen.

Did Jean-Marie Le Pen's daughter, Marine, condemn her father's colonialist crime? Not at all. Her "Marinade" went so far as to condemn Macron, the President of the Republic, who according to her "would dirty colonialism"!

"Marine Le Pen accused Sunday Emmanuel Macron of "staining the History of France" and "endangering our soldiers in Africa" by declaring that colonialism had been a "fault of the Republic".

"By wallowing in repentance, what's more, abroad, by retaining only the negative aspects of a complex process, Macron is staining the History of France and endangering our soldiers in Africa, already subjected to a growing anti-French hatred. This is irresponsible," wrote the president of the Rassemblement National (RN) on Twitter quoted by AFP.

What is most distressing is to see that currently, in October 2020, Marine Le Pen is more popular than the President of the Republic Macron, and that many believe she will be the winner in the next French presidential elections.

" POLL - If the first round of the presidential election were held today, as in 2017, Emmanuel Macron and Marine Le Pen would meet again in the second round. On the right, the best placed to play the troublemaker would be Xavier Bertrand."

So we see that Islamophobia will perhaps preside over France with Marine Le Pen!

As we said at the beginning of the article, this in no way justifies the abomination of Islamist attacks in France or elsewhere... On the other hand, it explains a little bit the current situation in France.

These abominable Islamist attacks are a bit of a boomerang effect of colonialist Islamophobia, in particular of the Islamophobia of the lepenist gang, of its acolytes and to a lesser degree of the cartoons of Charlie Hebdo.

A concrete analysis of this concrete situation reveals a paradoxical and worrying situation:

The people of France are in the process of entrusting themselves "democratically" to a fascization of France through the lepenist gang!

Marine Le Pen pretends to embody secularism and the values of the Republic Liberty, Equality, Fraternity. Beneath this lepenist mask is hidden the colonialist crime, perpetrated and defended in secret by the Clan.

The Muslims of France, like other French people, are caught in a pincer between Le Pen and his voters on the one hand, and the Islamists here and elsewhere on the other hand! The Muslims of France give by their dignified restraint a beautiful lesson of civilization to the Islamophobes who do not dare to say their name.

Le Pen's current attempts to fascinate France will also fail if we turn the tide in time. Let us not be accomplices in the lepenist crimes!

No to the mediatization of lepenist ideology and to the calls for an anti-democratic hardening of our Constitution on the television channels in France!

No to the sword of criminal Islamism!

No to the sword of criminal Lepenism!