What I learnt from teaching at the 'Jungle' in Calais

British volunteer Lena Anayi has spent time teaching French to migrants at the so-called 'Jungle' in Calais. Here she recounts her experiences and explains why she wants the plight of the migrants to stay high on the news agenda.

I recently returned from the Calais jungle, having spent a week volunteering at one of its schools. The students I worked with - all male, adult refugees, predominantly from Sudan and Afghanistan - had an eagerness to learn the French language that I had never encountered before. They would routinely push for long, intensive group classes that were sometimes over three hours in length.

On a few occasions I was forced to terminate my lesson by a colleague interrupting us in order to urge me to join the other teachers for lunch, which my students would be humbly encouraging of, despite the daily reality of the jungle which, in consenting to my lunch break, they were effectively agreeing to re-confront: a three-hour wait in a lunch queue for a small box of lentils and vegetables. The mood in the school was positive and energetic, with students building a strong rapport with teachers and with one another, and with lessons filled with humour and laughter (especially at my ‘funny’ Iraqi accent when I sought to explain things in Arabic to the non-English-speaking students, who were in the majority).

Students assisted one another as much as they served their own learning objectives during lessons, translating things back to one another and explaining complex linguistic concepts, with a generosity of time and readiness to help that fed into the overall positive learning environment within the school. And at the end of each day, when things were beginning to wind down, students would fist-bump me goodbye and walk together back towards their tents, whilst I figured out where to meet my fellow volunteers in order to get a liftshare back into Calais centre, where we would all eat together and then get an early night after an exhausting day. ‘I don’t understand why more of my friends aren’t coming out here and doing this’, I would conclude to myself each night as I readied myself for sleep, ‘the place has such a strong community vibe and feels safe.’

During one lesson mid-way through the week, in which the question ‘qu’est-ce que tu vas faire ce soir?’ was being used as a class exercise for learning the ‘near future’ tense, one of my students gave the following answer: ‘ce soir, je vais aller en Angleterre’. Oh, yes. It became instantly clear to me that I’d somehow managed to completely lose sight of the single thing that was most central to the Calais crisis: that many of the refugees were united by their (one-time or ongoing) desire to cross the Channel in order to enter the UK, and that this was being attempted by a not-insignificant number of students at the school on a nightly basis. (I should also add that a lot of the refugees in the camp actually arrive into Calais with no intention of trying to make it into the UK but simply as a place to stay for a few months whilst trying to seek asylum in France.) I quickly realised that, in choosing to focus on the shared positive experiences of the jungle, I'd neglected to account for the other side of the coin, the side which wasn't focused on the 'safety' and 'strong community vibe' of the place. 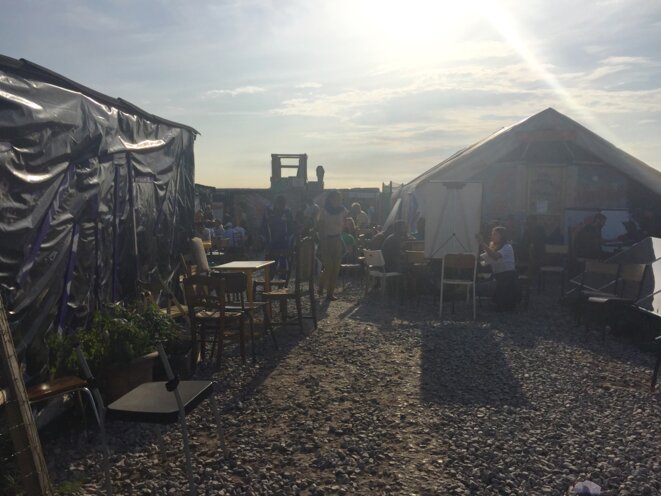 The École Laïque du Chemin des Dunes where Lena taught. © La rédaction
Every volunteer, journalist or passer-by will form a unique lasting impression of the Calais jungle. Here is mine: at a place where human beings choose to meet to teach and learn from one another about the French language (as well as English and Italian and a few other things), where they tell jokes, exchange stories and anecdotes and impart knowledge, and where they all look out for one another and friendships are formed, at the end of each day, these human beings will part ways in order to each inconspicuously go about their own business, with the expectation that they will most likely see one another the following day, back at the school. Except that for some of these human beings, their business is figuring out how to get a liftshare in order to return back to Calais centre before deciding between dinner options and then getting an early night in a room to oneself at an under-reserved youth hostel; and their expectation for ‘à demain’ is blended with hope.

Whereas for others, their business is walking back to a second three-hour wait for a small food portion, followed by hours spent at the port waiting for an opportunity to jump onto one of the lorries crossing the channel, potentially risking their lives, followed by eventual surrender and return to the camp for a few hours' sleep in a crowded, disintegrating tent; and their expectation for ‘à demain’ is tinged with regret. The following morning, students and teachers will then meet once again, with forgotten memories of the previous evening and the only differences that matter once again being the asymmetries in knowledge of the French (or English, or Italian) language.

As much as it is laden with flawed reasoning that is a unique consequence of my own (human) failings, my experience at Calais served to remind and emphasise the point that we - that is, those with British citizenship, along with those seeking such citizenship - are all united by our similarities, far more than we are divided by any differences. But important differences do exist, and we should not lose sight of them, precisely because we share in our similarities. Confronted with the vulnerability of the refugees, the solidarity that we as British citizens might feel with them (or indeed any other vulnerable group) is, it seems to me, contingent on a sustained awareness of both of these things.

This feeling of solidarity seems to me necessary in order to sustain or increase the democratic will for policy change, as well as supporting the charitable activities of NGOs, volunteers and donors. My predominant concern is, however, that high levels of solidarity with the refugees is currently threatened by the fact that the Calais crisis has dropped off the news agenda (whilst the situation is becoming increasingly grave: the number of refugees in the camp is estimated to have roughly doubled over the summer, reaching over 9,000 refugees according to the most recent census), meaning that we as a country are decreasingly exposed to the situation in the Calais jungle, rendering it - and hence the experiences of its inhabitants - ever more distant. And with this, the memories of our commonalities gradually fade whilst those of our differences intensify.

Which is why when, towards the end of my stay as I began to contemplate the best course of action so as not to betray the growing frustration with the situation and determination to push for change that I had accumulated over the course of the week, and as I discussed this question with other volunteers, I came to the conclusion that the single most useful thing I could do was to keep the conversation going.

Lena Anayi is a student and about to start an MPhil in Economics at Oxford University.