No Justice in Lima Outcome

Late in the night, 194 countries of the UN framework convention on climate change finally found an agreement. Far from satisfactory, this agreement jeopardizes any "historic agreement" in Paris. The climate justice NGOs and movements, including Attac France and the Friends of the Earth France, have released this first analysis.

Late in the night, 194 countries of the UN framework convention on climate change finally found an agreement. Far from satisfactory, this agreement jeopardizes any "historic agreement" in Paris. The climate justice NGOs and movements, including Attac France and the Friends of the Earth France, have released this first analysis.

The world faces a planetary emergency: climate change, caused by a system that puts the pursuit of profit above the needs of people and the limits of nature. It is already devastating millions of people across the planet. Climate science predicts we will soon breach critical tipping points and could be locked in to 4-5°c of warming with catastrophic impacts for us all.

The Lima Conference should have been a milestone that marked out how governments will take urgent action to tackle climate change and to support vulnerable people across the world to adapt to its locked in impacts.

The concrete demand was to set out how we would increase emission reductions from now until 2020, and set long term climate targets to make sure we limit temperature increase to below 1.5°C. Therefore, climate targets need to keep us within the emissions budget, which should be shared based on the principle of common but differentiated responsibilities and respective capabilities and honor climate debt.

What we have seen in Lima is another in a series of yearly decisions that weaken international climate rules, failing people and the planet.

The pre-2020 mitigation pledges are unjust and weak and put us on track to breach 2°C of warming by mid-century. The promised increases in pledges didn’t materialise in 2014, nor was there a commitment to urgently revisit, revise, or review them.

Lima prepares us for an agreement in Paris that ignores the needs and rights of impacted people across the world by precluding binding commitments on finance, adaption, loss and damage and technology transfer.

This outcome fails to link the actions of countries with the technology and finance that is needed to enable people in the South to adapt and build resilience and deal with the loss and damage from the impacts of climate change, as well as to carry out mitigation actions without which the world will not reach the scale of transformation and just transition needed to limit temperature rise below 1,5 C degrees.

What was decided in Lima opens the possibility for every country to decide its own climate action going forward, with no reference to what science, people, and justice demand, and without a clear regulatory framework. We saw politicians, especially those from the US, the EU and their allies, acting in the interest of big polluting corporations, determined to further deregulate the international climate change regime, fundamentally undermining the UN climate convention, by weakening the rules for developed countries, shifting responsibility to the South, and ignoring their legal and moral obligation to transfer finance and technology.

Leaving Lima we see that again a backdoor has been opened for the further expansion of the failed experiment of carbon markets. Including, possibly carbon credits from forests and soil, which undermines communities' land rights and would be devastating to farmers and forest communities across the world whilst preventing the transformation we need.

The Peoples’ Summit and its march through the streets of Lima demanded the defence of Mother Earth, and the guarantee of rights of all peoples, of all genders. It presented a clear vision for solutions to the climate crisis, and for alternatives to its causes.

People across the world are taking up these alternatives and fighting to transform the system. We are struggling for survival and for the safety and security of our homes and livelihoods from climate disasters.

We are fighting for a transformation of energy systems, away from fossil fuels, towards access to decentralised, renewable, safe, community controlled energy systems for all. We are defending our food sovereignty and expanding agro-ecological solutions, whilst struggling to adapt to the devastating consequences of locked in climate change. Just as community-based forestry programs work in the interest of people, particularly indigenous peoples, instead of bankers and financial capital in the North.

People are building power - at local, national and global level. We continue to put more people on the street, to block mines, ports, corporate offices – and our strength is growing, as is our power.

We will reclaim power from those who don't act in our interests. We will resist the imposition of a ‘global climate deal’ that does nothing for the climate and even less for people.

They tried to bury us here in Lima, but we are seeds, and we will grow into a forest of resistance. 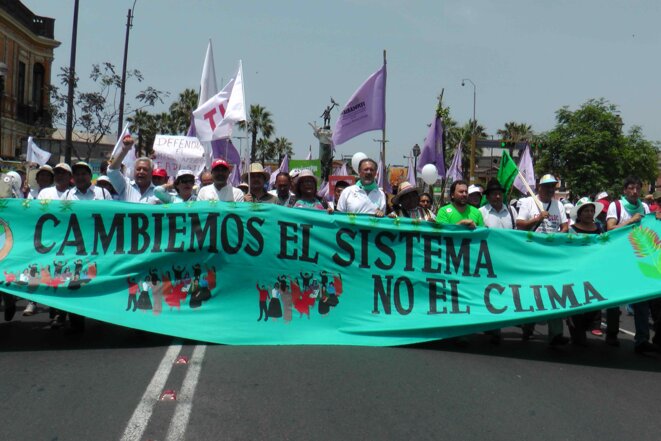 International and Regional Networks and Organisations

Friends of the Earth International

Campaign for a Life of Dignity for All - Philippines

Ecological Society of the Philippines

Our Rivers, Our Life (OROL)- Philippines and Gitib, Inc.