On the eve of the debate on the new animal protection bill, an AFP article published in l'Obs reports on the decision of one of France's biggest amusement parks to close its dolphinarium and relocate the dolphins to other dolphinariums in countries with less strict laws, rather than reintroducing them to the wild.

This Monday (25 January), Parc Astérix, near Paris, announced the closure of its dolphinarium, which housed 8 dolphins. This decision comes on the eve of a debate in the French National Assembly about the bill against animal cruelty, including a ban on keeping cetaceans in captivity.

In a press release published on its website, the dolphinarium of Parc Astérix, which opened in 1989, states that this "decision to close is based on the desire to focus on our original activity as an amusement park."

"We've been thinking about this for several years. I would even say we took the decision three years ago," Nicolas Kremer, the managing director of Parc Astérix told Le Parisien on Monday.

The first reading of the bill, "designed to curb cruelty to animals," will begin on Tuesday in the National Assembly. It is being put forward by a coalition of centrist lawmakers, and it includes a ban on keeping and breeding cetaceans in captivity, as well as on their use in live shows. In France, three establishments currently keep dolphins: Parc Astérix, Planète Sauvage and Marineland.

Parc Astérix, owned by the Compagnie des Alpes group, indicates that its eight dolphins "will be transferred during the first quarter of 2021 to dolphinariums across the 27 EU member states. They are all approved by scientific and government authorities and comply with the strictest animal welfare guidelines, as set out by the European Association of Zoos and Aquariums (EAZA). They also meet the standards of the European Association for Aquatic Mammals (EAAM), in terms of acceptable genetic diversity."

No Chance of Reintroduction to the Wild

Parc Astérix points out that "after having analysed different options and in the light of numerous discussions we had with scientific experts and veterinary specialists, it became clear that no site or programme of reintroduction to the wild offered the required safety guarantees" for dolphins born in tanks or which have lived in one for nearly 30 years.

This decision has piqued the ire of C’est assez ! (the name is a pun on "Enough!" and "Cetacean", ed.), a campaign group opposed to the captivity of cetaceans and marine mammals, who have started a petition against transfers between dolphinariums: 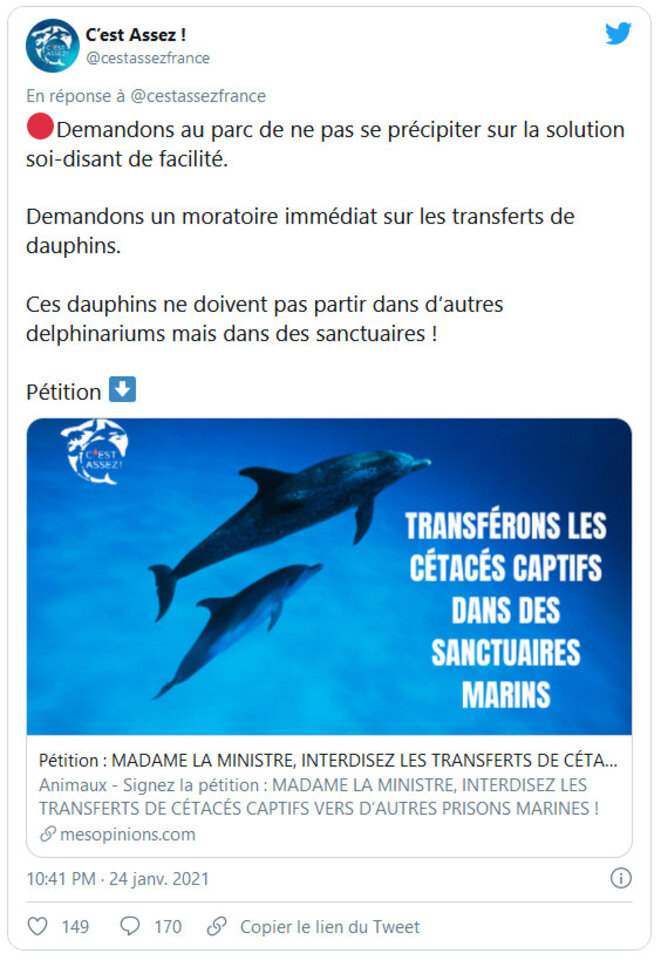 "Let's ask the park not to rush into the so-called easy solution."

"These dolphins should not go to other dolphinariums but to sanctuaries!"

Park Astérix claims that "because of their age, the fact that most of them were raised in captivity, and the distance separating the populations they come from, these dolphins could not be reintroduced into the wild in a way that would completely guarantee their safety."

"This appeared to be the best solution to ensure good living conditions. Reintroduction into the natural environment is not possible for these animals raised in captivity. For the moment, marine sanctuaries are still only in the planning stage," Nicolas Kremer told Le Parisien, and he added that "50% of the park’s visitors" attended the dolphin show.

Currently closed due to restrictions linked to the COVID-19 pandemic, Parc Astérix, which usually receives more than 2 million visitors a year, plans to reopen on the third of April.