From the first-time candidates struggling to emerge from the shadows of their famous predecessors, to our identification of the watershed moment in the media campaign, the MéLexTra JET team from Lille (3) University give five conclusions about the portrayals of the first round candidates in the French press. 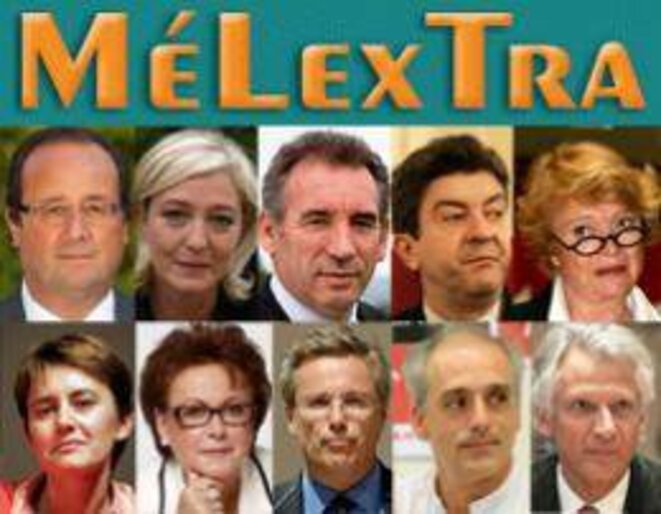 From the first-time candidates struggling to emerge from the shadows of their famous predecessors, to our identification of the watershed moment in the media campaign, the MéLexTra JET team from Lille (3) University give five conclusions about the portrayals of the first round candidates in the French press.

There are plenty of things to say about this election campaign that go beyond the scope of the current project. The unprecedented cross-party chorus of condemnation heaped on the banking sector, for example, and the (perhaps related) minor victory of maverick independent Jacques Cheminade in managing, where a former Prime Minister failed, to obtain the 500 sponsorships from local councillors required for him to be included in the first round ballot.

However, sticking to the remit of the project – representations of the first round candidates in the French media – we have been able to draw five general conclusions:

1. Certain candidates have been overshadowed in the media by their famous predecessors

At the beginning of this campaign, at least four of the first time candidates – Nathalie Arthaud, Philippe Poutou, François Hollande and Marine Le Pen – were in a potentially difficult position with regard to their relationships with their better known predecessors. In all cases, the French media have commented upon this, but the extent to which this has been allowed to dominate coverage has depended on the candidates in question.

The intimacy of the relationships between Marine Le Pen and her father Jean-Marie Le Pen, and between François Hollande and his ex-partner Ségolène Royal, seems, strangely enough, to have played in their favour. The cultural distaste amongst the French political media to engage in personal tittle tattle may well have put journalists a little more on their guard in terms of the numbers of references they have permitted to the previous candidates for the FN and the PS. It’s perhaps more to the point, however, that both Hollande and Le Pen had led extremely successful leadership campaigns in the run up to the election. And, in the case of Hollande in particular, the socialists’ innovation of public primaries seems to have given him a very clear mandate and momentum which has allowed him to shake his political identity free of the shackles of his previous personal relationship. Royal is actually very rarely mentioned in articles about the PS candidate. It is quite common for Jean-Marie Le Pen to figure in articles about his daughter, but the general concencus seems to be (as our two articles demonstrate) that she actually represents a different tradition from her father in the FN and that she has been quite successful at repositioning the party with her process of ‘de-demonisation’.

On the other hand, Nathalie Arthaud and Philippe Poutou have tenuous positions as representatives of their respective parties and where Nathalie Arthaud is often quoted as conceding her need to do more to come out from under the shadow of Arlette Laguiller, we have found it genuinely impossible to find any press on Philippe Poutou that does not explicitly refer to his dependency on the much more media friendly Olivier Besancenot in his communications with public and press. Of course, both Lutte Ouvrière and the Nouveau Parti Anticapitaliste have been seriously damaged by the success of Jean-Luc Mélenchon.

2. An unusual amount of attention has been paid to the question of the ‘500 signatures’

Perhaps more so than any previous campaign, the scramble of the minor (especially right wing) candidates to get their 500 sponsorships has been the focus of media attention. Principally this is because the system has been formally challenged by Marine Le Pen and vehemently criticised by many other candidates, including Christian Democrat Christine Boutin, who thankfully didn’t go through with her threat to use the ‘nuclear option’ of a hunger strike if she didn’t get the necessary signatures. The failure of Dominique de Villepin, a distinguished and influential politician by anyone’s standards, to get the necessary sponsorships has been particularly interesting. The veiled allegation is that his political nemesis, Nicolas Sarkozy, put pressure on UMP councillors and their allies to make sure that he would fail, but no evidence for this has been forthcoming. The fact, however, that the obscure Jacques Cheminade should have managed where a former Prime Minister failed only adds fuel to such speculation.

3. Despite a marked revival in his popularity over the past couple of years, Sarkozy’s programme failed to have a massive impact in the media

There seems to have been a concerted effort by the right of centre press to treat Sarkozy’s announcement of his candidacy on the 15th of February as a watershed moment which would define the debate for the rest of the campaign. It is an effort that appears broadly to have failed, having been overtaken by events.

It is likely to become the truism of the 2012 campaign that this event, and neither Sarkozy’s campaign launch nor the shocking killings in Toulouse, was what actually had the most lasting impact on press coverage of the election. From the 18th March onwards, articles about many of the other left-wing candidates, for example, became dominated by the question of how their chances had been affected by the surprise popularity of the candidate the English press predictably always calls a ‘left wing firebrand’ (the fact we have not had recourse to the cliché in our translations indicates important differences between French and English journalism, we think). No less than 8 of the articles we translated were of this sort, and Mélenchon was easily the other candidate most often mentioned in articles about his rivals from the latter stages of the campaign... more so even than the incumbent President. The 64 million euro question, of course, has been whether or not he will fall in behind François Hollande in the second round.

5. There has been general mistrust of the media amongst the candidates

Almost as widespread as the anti-capitalist rhetoric have been the criticisms of media portrayals of the campaign and the candidates. Candidates and their representatives do not always make the same sorts of complaints, of course. For Poutou and his party it is often the obsession of the media with former candidate, and party founder, Olivier Besancenot; for Mélenchon it’s the ‘collusion’ of the press with Marine Le Pen, giving her extreme nationalist point of view disproportionate airtime to deflect attention from the failings of capitalism; and Bayrou has long been denouncing the media’s imposition of ‘bipartisan polarisation’. Bayrou in particular seems to have a very testy relationship with journalists this time round and has ended up being portrayed as a refusenik of both the press and the opinion polls. But it’s not just the also-rans and the minnows that have been grumbling. Members of both Hollande’s and Sarkozy’s campaigns have been sniping at the media.