Coralie Lemke, writing in popular French science magazine, Sciences et Avenir, provides an overview of the international science tracing the recent wildfires in Australia to global patterns of climate change that could render certain highly populated parts of the world uninhabitable for humans. 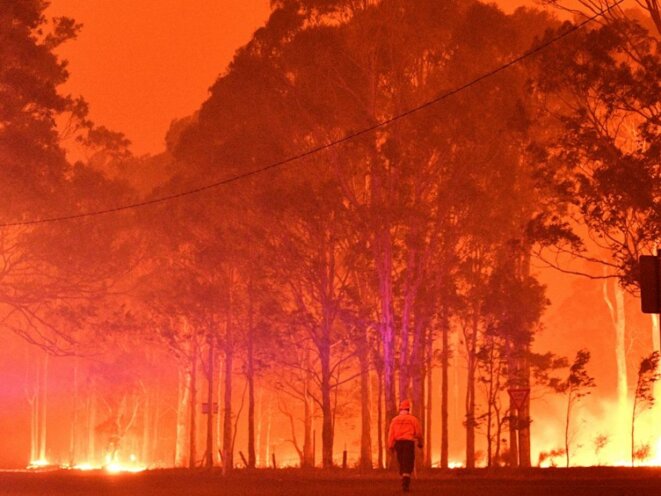 In Australia, devastating wildfires have been raging since September 2019, sometimes so fiercely that firefighters can’t control them any more. Even heavy rainfalls have failed to douse the flames. In the capital city of Canberra temperatures reached a record high of 42°C on 4 January 2020. The residents have been suffocating and have sometimes been forced, like the residents of New South Wales, to leave their homes to flee the flames. Over the coming years, heatwaves are likely to become more and more intense... Is Australia becoming uninhabitable for human beings? Will Australians be turned into climate refugees?

In 2019 all of the country’s records were smashed. The average daytime temperature across the country for the year reached 30.7°C. These are the highest figures since records began in 1910. The country also broke its own highest temperature record six times between January and December 2019. On the hottest day of the year, 18 December, the average temperature across the country was 41.9°C. The absolute temperature record had been reached that day in the Nullarbor Plain in the south of the country, where it measured 49.9°C. These hot and dry weather conditions are generally believed to be due to the Indian Ocean dipole (a phenomenon also known as El Niño), which had been particularly strong. But according to the Australian Bureau of Meteorology (BoM) climate change is also an underlying cause. The BoM warns that temperatures in the country have been steadily rising over the years. Since 1910 the temperature has risen by 1.4°C. But 2019 was also the driest year ever recorded in Australia, with only 277.6 mm of rainfall on average across the country, about 40% below tthe normal levels.

Predictions for the coming decades point to ever higher temperatures. The temperature is expected to rise by an average of between 0.4 and 2 degrees by 2030 and between 1 and 6°C by 2070, according to studies conducted by the Commonwealth Scientific and Industrial Research Organisation (CSIRO). "Inland areas are likely to warm faster than the global average, while coastal areas and the tropics will warm at around the global average.," the CSIRO says in its report. Populations in cities are also expected to suffer particularly badly from rising temperatures, according to a CSIRO study focusing on urban areas in the country. "It is important to note that people living in cities can be more susceptible than non-urban dwellers to the effects of heatwaves as a result of the urban heat island (UHI) effect. This is caused by the prevalence in cities of heat-absorbing materials such as dark coloured pavements and roofs, concrete, urban canyons trapping hot air, and a lack of shade and green space in dense urban environments. This can cause higher temperatures (particularly overnight) than in surrounding non-urban areas."

Given that a healthy body temperature is between 36.1 and 37.8°C, the temperature of the human skin must remain below 35 degrees to be able to remove body heat. When the skin reaches 37 or 38 degrees, the body's internal temperature rises to a potentially fatal level of 42 or 43 degrees. "You can manage to survive very high temperatures, of up to 100 degrees, but only over a very short period of time, like when you're in the sauna," says Rémy Slama, an epidemiologist specialising in environmental issues at the French National Institute of Health and Medical Research (INSERM). "When the temperature reaches 30 or 40 degrees during a heatwave, and the body never cools down, the body is put under permanent stress: bodily functions start to break down, and ultimately you can die." This is the case, for example, when the temperature doesn't drop during the night and people don't have a cool place in which to bring down their core body temperature.

Humidity is also a factor. In a very dry desert, the body can safely withstand temperatures over 50°C. However, in areas where humidity exceeds 90%, such as the tropics, the outside air becomes lethal at temperatures above 40°C. By 2070, more than 500 million people are expected to experience a combination of humidity and high temperatures, which kills even healthy people within six hours, according to an MIT study. Known as the "wet-bulb temperature", this phenomenon refers to the temperature that a parcel of air reaches if water is evaporated into it to reach saturation. "When the evaporation of water, i.e. perspiration, no longer works in an environment that is already too humid because the air is saturated with water, then your body becomes overwhelmed and its temperature can no longer drop. Deaths then occur due to organ failure, such as the breakdown of kidney function or the pulmonary system," explains Rémy Slama. MIT researchers have identified several regions where the phenomenon has had an impact, such as the northern part of Australia, especially a large portion of the Northern Territory (where the city of Darwin is located).

As well as potentially unbearable heat, the consequences of rising temperatures on the environment could lead to other kinds of threats to human life. The CSIRO predict that the effects of rising temperatures in Australia will lead to an expansion of malaria-infected areas and an increased risk of dengue fever among the Australian population. These are two consequences of the projected increase in the survival rate of the mosquitoes that transmit these two diseases. The population at risk of flooding is expected to double and children of the Aboriginal population living in the centre of the country will witness a 10% increase in diarrhoea-related illnesses. Finally, the CSIRO also mention the arrival of climate refugees from the Pacific Islands.

Aboriginal people may well be the first to be displaced by the effects of climate change. The city of Alice Springs, in the middle of Australia, is already having to cope with the build up of the country’s first climate refugees: Aboriginal communities fleeing their homelands where the water supplies have dried up. "They are crammed into shantytowns, into places where the heat is unbearable," said Jimmy Cocking CEO of environmental organisation ALEC in a press release.

In addition to increased disease and water shortages, forest fires are expected to become increasingly common. According to a report by the University of East Anglia, the University of Exeter and Imperial College London, no less than 57 studies published since 2013 have all established a link between global heating and more frequent and more violent wildfires. The increased risk appears to be due to the combination of high temperatures, low humidity and often very strong winds. "The fact that fires are increasing in areas within or near closed canopy forest is the key issue of concern. This is one of the land cover types where direct impact on societies is greatest. It is also important to highlight that most studies predict increased lightning activity in a warming atmosphere, which further exacerbates wildfire risk," Stefan Doerr, Professor of Physical Geography at Swansea University, told the Science Media Centre. "This has been seen in many regions, including the western US and Canada, southern Europe, Scandinavia and Amazonia," reports the study. Besides Australia, which is the current focus of attention, many regions in the world may well become uninhabitable in the long term. The MIT study identified several other areas where the combination of high temperatures and humidity could wreak havoc as early as 2070, such as Brazil, the North China Plain and the Persian Gulf.