Fentanyl was brought into the US for the first time in 2013, coming from China, most of it shipped by mail. Now the largest part of it is smuggled from Mexico, where it has replaced the more difficult to find heroin. The increasing amount of Fentanyl seized along the Mexican border by the patrol police shows the growing flow of this drug smuggled from that country. 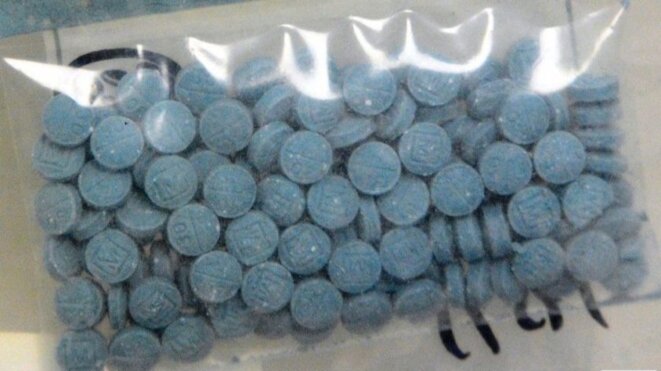 At the beginning Fentanyl was a painkiller, more powerful than morphine, whose strength was meant as a last resort.

But at some point it became a street drug,  used much more than heroin and 30 times stronger.

Nowadays Fentanyl has become the real cause of the opioid epidemic in the US, with hundreds of thousands of deaths.

The number of deceased in the US reached only last year 31.000, like no other drug ever did in just one year.

Fentanyl was brought  for the first time in the US in 2013, coming from China, mostly shipped by mail.

It can also be purchased on the dark web, but only in small quantities.

Now the great part of it is smuggled from Mexico, where it has replaced heroin more difficult to find.

Heroin comes from opium poppy which grows three times a year but which is quite difficult and dangerous to breed. For these reasons Mexican smugglers prefer to chemically synthesize Fentanyl.

Easier to produce, less risky and basically with an endless production, given availability of raw materials .

The increasing amount of smuggled Fentanyl is proven by the growing quantities of pills seized by patrol police along the Mexican border.

Since 2000 US doctors have been massively prescribing painkillers, and as a result of that now authorities make it more difficult to buy them without a prescription, shifting drug addicts to buy heroin.

In the meantime some Mexican farmers connected to druglords start to cultivate opium.

In 2017 the price of opium reached the peak of 600 USD a pound. Today a pound costs less than 100 USD and the reason for that is the spreading of synthetic drugs.

The key component for Fentanyl is 4-anilino-N-phenethyl-4-piperdine, which is smuggled from China.

The first person who synthetize Fentanyl was Paul Janssen, a Belgian chemist, who in 1960 was looking for a painkiller more powerful than morphine.

Eight years later the Food and Drug Administration approved Fentanyl as an anesthetic used for surgeries.

Later on in China some chemist begun to produce Fentanyl illegally and to sell it on the dark web.

From this way drug dealers started to use it to improve powerness of both heroin and cocaine.

In 2018 the number of deaths for overdose of Fentanyl doubled those of heroin.

At the same time a large amount of heroin that was sold on the streets, more than 10%, contained a large proportion of Fentanyl. That was the third wave of opioids investing the US after prescription pills and heroin.

According to US law enforcements Fentanyl is much more profitable than heroin. To produce 1 Kg of pills it costs 32.000 USD; but with 1 pound of Fentanyl, which is less than half of a Kg, is possible to produce 1 million pills, which can be sold on the streets for 20 million USD.

Anyone can produce Fentanyl in theory. This means that both production and selling could be largely decentralized. Which is in contrast with the concentration of power typical for Mexican drug cartels.

Once the US drug market use to ask 90% heroin and 10% Fentanyl; nowadays the proportion is the reverse.

Unless the demand is from dealer, not consumers. Cause for them is much more profitable. (cm)