On the 4 th of April 2019 the Musée Guimet celebrated the Foundation Al Thani’s gift of a rare Indian carved ivory door. The evening was organized around a lecture given by Professeur Ebba Koch, an expert on Indian Mughal art and architecture who was appointed in 2001 Adviser to the Conservation Collaborative du Taj Mahal :

As scheduled in the cycle Rencontres Al Thani her lecture Le Taj Mahal, Orphée, les Moghols et les Médicis explored the various artistic, intellectual and philosophic influences beteween Italy and India through the Silk Road commercial and diplomatic dealings, at the time of the Renaissance the best Indian silks were brought to Venice and Genoa. Thus is explained the presence of a pietra dura panel showing Orpheus charming the animals on the the back of the marble throne in the Hall of Public Audience of the Red Fort in Delhi, built by the Mughal Emperor Shâh Jahân between1636 and 1648. 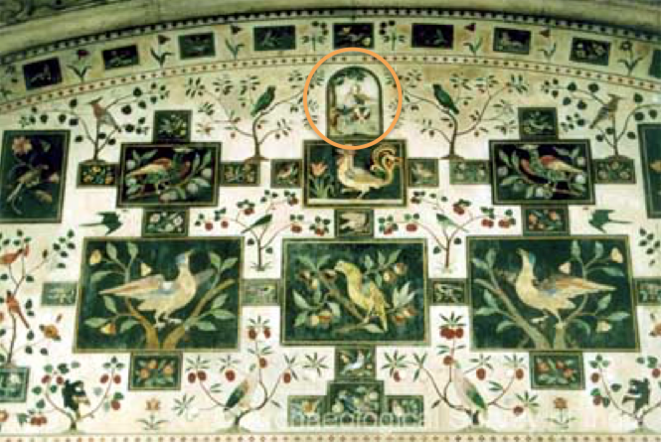 Throne of the Hall of Public Audience in the Red Fort 1636-48, Delhi, India 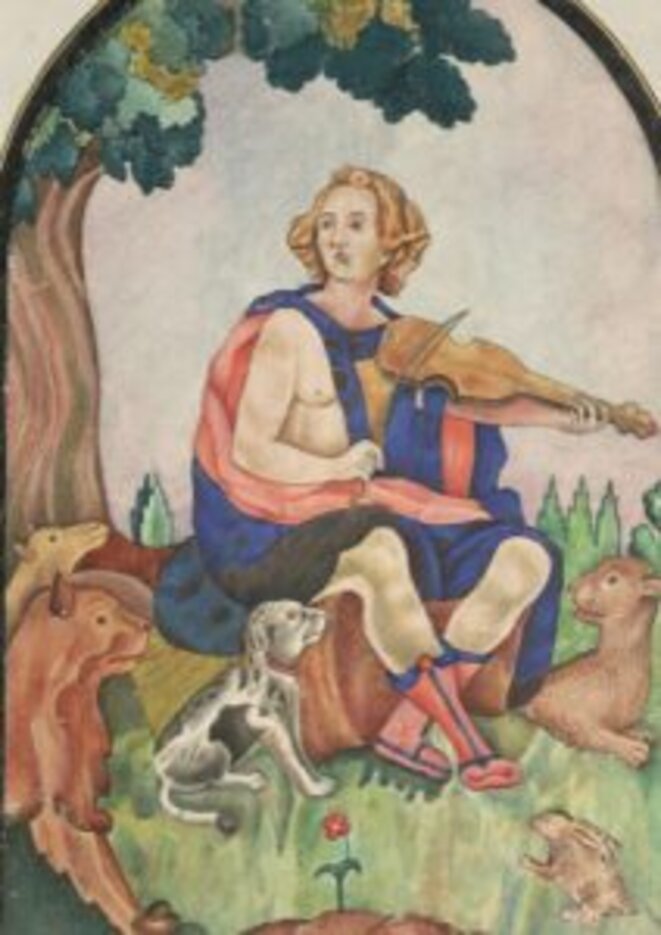 These panels of Florentine mosaic produced by the Opificio delle Pietre Dure created in 1588 by Ferdinando I de’ Medici were exported to decorate ebony veneered cabinets of collectors, princes and aristocrats. Often presented as prestigious diplomatic gifts these cabinets were used to contain rare and precious objects : jewels, lace, exotic shells, the inner content and the outer container similarly precious and part of the humanist ethos of the Renaissance. The iconography of these pietre dure panels participated of this spirit in depicting classical Greco-Roman myths in a didactic manner.

The Barberini cabinet veneered in ebony and rosewood, decorated with pietre dure panets showing in the centre Orpheus charming the animals, with above the Barberini crest and around representations of Aesop Fables, a salamander and a phoenix, both associated to the regenerating power of fire. Florence c. 1606-23. The Metropolitan Museum of Art, New York 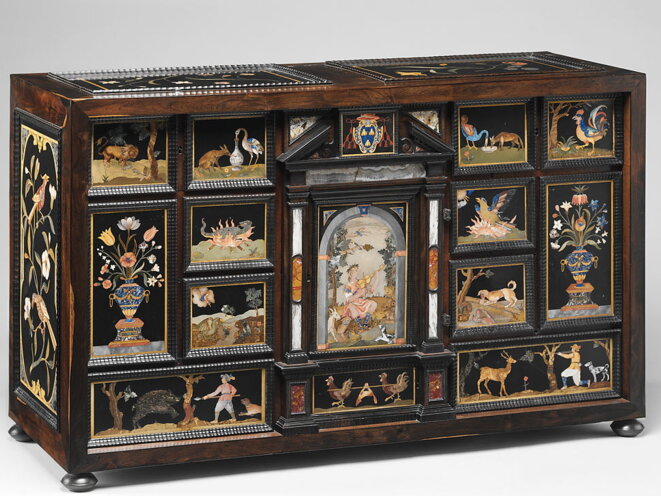 The Barberini Cabinet, Florence, c. 16O3-26, The Metropolitan Museum of Art, New Yok
Orpheus’s myth stands for a complex and mysterious symbol. Marsilio Ficino mentioned it in 1471 in his Corpus Hermeticum :  ‘Hermes Trismegistus was called the first theologian ; he was followed by Orpheus, who initiated Aglaopheme to the holy truth and Pythagoras was Orpheus sucessor in theology , he was then followed by Philolaos the master of our Plato. This is why there only one secte of the prisca theologia [ ancient theology], always coherent within iuself, created by six theologians according to an admirable order which starts with Mercury [Hermes] and ends with Plato’. The Council of Florence aiming to bring together the Eastern and Western Churches was called by Pope Gregory IV in 1438. It brought to Tuscany Greek scholars of the Prisca Theologia and heralded the rise of Neoplatonism in Western Europe. Ficino, a humanist and theologian, translated Plato’s works in latin and in 1462 created the Accademia Neoplatonica under the aegis of Cosimo de’ Medici. Ficino’s influence through his writings and those of his pupils, among them Pico della Mirandola, was the intellectual and artistic ferment of the Renaissance. 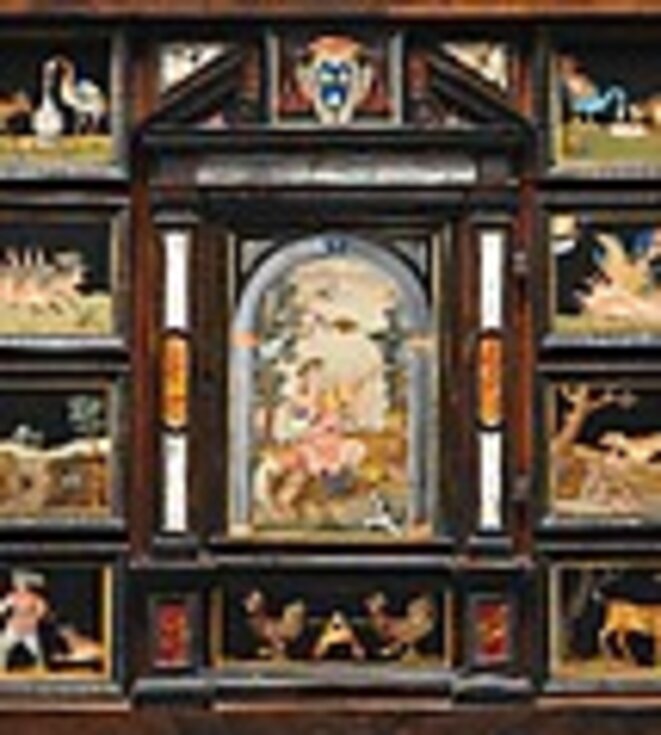 Orpheus was a visionary poet and musician. He was granted many talents by  Apollo who gave him his lyre with seven strings to which he added two more in honor of the Nine Muses, one of them being his mother Calliope, the Muse of Eloquence and Epic Poetry. His music and his song charmed the wlld beasts and brought to life the whole world. His myth which appeared towards the 5th century BC is linked to the initiatory rituals of the Mysteries of Eleusis, Demeter and Dionysos. Orphism celebrates the Universal Harmony of Hermes Trismégistus’s The Emerald Tablet : All is in all. As above, so below. As does Pythagoras’s Cosmic Harmony and his metaphysical system based on Numbers and Sacred Geometry. In 1509 the Franciscan mathematician Luca Pacioli published in Venice a treatise De Divina Proportione, the first part dealing with the Golden Ration was illustrated by Leonardo da Vinci.

The beneficial effect of Universal Harmony bringing Peace and Prosperity to the world and to mankind made of the Orpheus myth a symbol used by Reanaissance kings and princes, such as the Barberini, a Florentine family of Princes of the Church, on the cabinet with their coat-of-arms, or the Mughal Emperor Shâh Jahân at the top of his throne in the Red Fort at Delhi. French kings also favoured the myth and the symbol. In 1599 at Saint Germain-en Laye King Henri IV engaged Tommaso Francini, fountain designer at the court of the Grand Duke Ferdinandi I de’ Medici, to adorn the gardens of his Château Neuf with artificial grottoes on mythological themes. The gardens of the Medicean villas reflected the Renaissance humanist vision of the universal. They formed part of the collections of the Studioli, the first Cabinets of Curiosités where the whole of the human knowledge of the time was displayed. Grottoes made of rocaille with shell-encrusted interiors containing sculptures, fountains with sophisticated waterworks and automatons, were built in gardens where the ordered perspectives of groves and flowerbeds were the scenery and symbol of the prince’s power over the world. Grottoes were places of meetings, learned discussions, concerts and banquets. They were also the symbol of the esoteric world and of the ancient initiatory mysteries of the Hermetic tradition. At Saint-Germain-en-Laye, where seven grottoes were built in the gardens, one of them famed for the water powered organ played by a Maiden automaton, the Grotte d’Orphée was part of the initiatory education of the young Louis XIII to his future role as a king, as is related by his personal doctor, Jean Héroard, in his Journal. 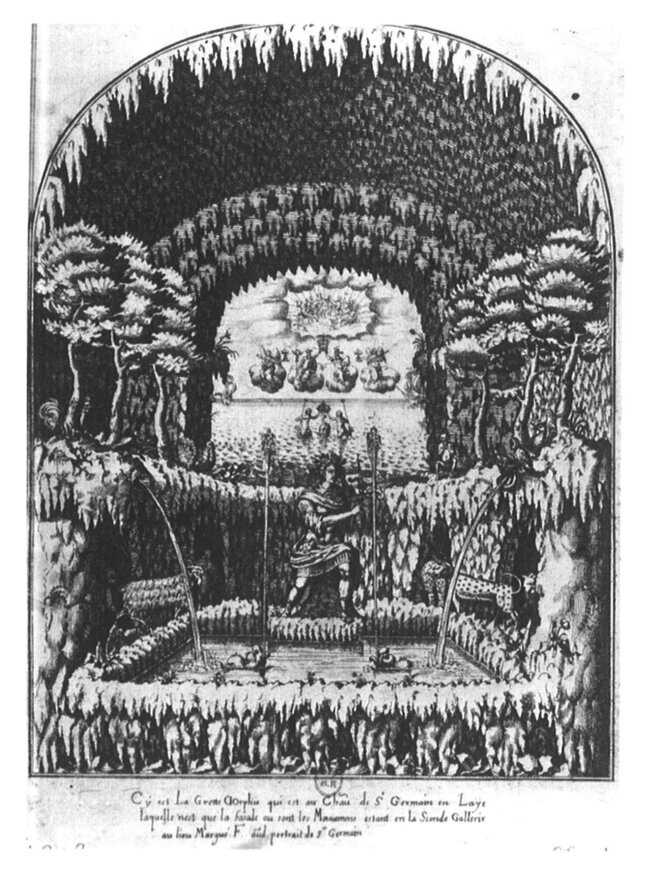 The other aspect of the myth of Orpheus also intimately linked to the Hermetic and Platonic notion of Universal Harmony, Beauty and Virtue, is the concept of Eternal Love, so powerful that it allowed him to go the the Underworld and rescue his beloved Eurydice.

The supreme ode to everlasting love was enshrined in a monument by the Mughal Emperor Shâh Jahân in the Taj Mahal, the mausoleum erected to his beloved wife’s memory. Built of white marble and decorated with pietra dura and precious gems from 1631 to 1643, this pavilion to the glory of Love resonates with the divine proportions of the Golden Ratio, to use Luca Pacioli’s own terminology. It is on Indian soil the ultimate representation of Divine Harmony in the Hermetic and Pythagorian tradition set in a garden, in Persian named Paradise. It is Paradise on earth symbolized by Human Love, a reflection of Divine Love, in a natural setting fashioned by the art and the hand of man in reflection of the divine. Ficino’s Prisca Theologia is universal in the spiritual, philosophical, intellectual and artistic exchange and mutual inspiration between East and West. 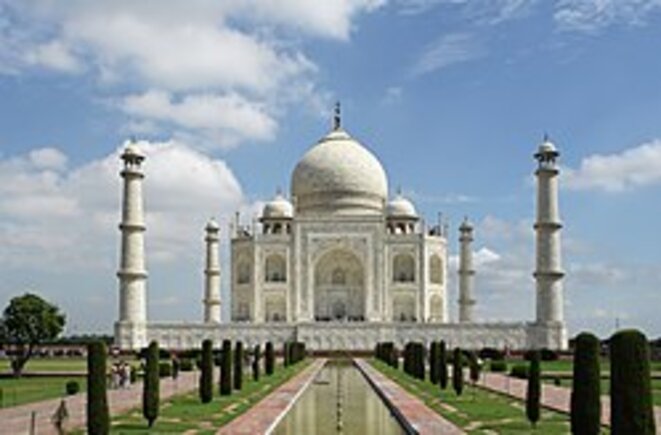 The carved ivory door at the Musée Guimet in Paris is also dedicated to the representation of human love, albeit in an erotic manner. Ivory carving is a traditional craft in India since the Antiquity, as can be seen in the statuettes of the Begram Treasury in Afghanistan dating from the 1st century AD, similar examples were found in Pompei. Indian ivory was highly prized in the Roman Empire for the production of diptychs, writing tablets, such as the Diptych Barberini, 6th centuty AD in the Louvre Museum, depicting the Triumph of a Byzantine emperor. It was given to Cardinal Francesco Barberini in the 17th century by the Provençal humanist scholar and collector, Nicolas Claude Fabri de Peiresc, owner of a famous Cabinet de Curiosités, about which he used to correspond with the Antwerp painter Peter Paul Rubens who was also a learned and erudite collector.

The attraction of ivory as a medium in the production of luxurious objects : combs, caskets, statuettes such at Begram, is best described by Dr. Sherma 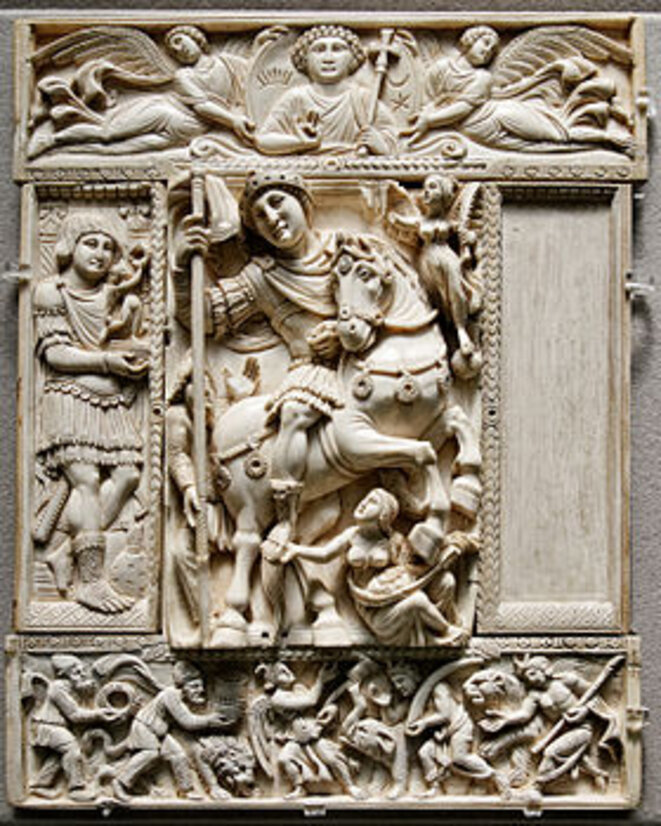 Barberini dipytch, Byzantium. Musée du Louvre, Paris
n E. Lee in his article ‘An early Pâla ivory’ in 1949 published in the Journal of the Indian Society of Oriental Art (JISOA) : they ‘ …give a particularly intense aesthetic pleasure from the fact that the very medium lends its own nature to the Indian sensuous spirituality.’

It is so in the Musée Guimet door composed of eight carved ivory panels mounted on a wooden base. The depicted erotic scenes are framed by stylized foliage, lotus flowers and rosettes. It is of impressive dimensions 1m72 x 95.5cm and illustrates the use of ivory on a large scale in India, whether solid or in veneering. Some seat furniture and throne feet can be seen in museums in India at the National Museum of New Delhi, and abroad at the The Freer Gallery of Art, Washington, The Museum of Art, Philadelphia, The Victoria & Albert Museum, London. Only few panels of a door from the Palace of Mysore destroyed by fire in 1897 have survived.

The narrative tradition of Indian   sculpture depicting sacred texts on temple walls, works of art and cult objects goes back to Antiquity. Indian spirituality is present in all aspects of human life thus in the description of Kama, or desire, found in several texts among which the Kama Sutra, a sanskrit manuel written by Vātsyāyana and dated between the 5th century BC to the 4th AD. It is a guide dedicated in a very concrete manner to ‘the art of living well’ one’s sexuality whether in one’s intimate life or within society. Erotic scenes illustrate its precepts in Hindu art. Kama is one of the four Puruṣārthas or purposes of human life, a fundamental principle of Hinduism, the three others being Dharma, to live a righteous life, Artha to achieve prosperity, and Moksha, to free oneself from karmic bonds through the practice of spiritual values. 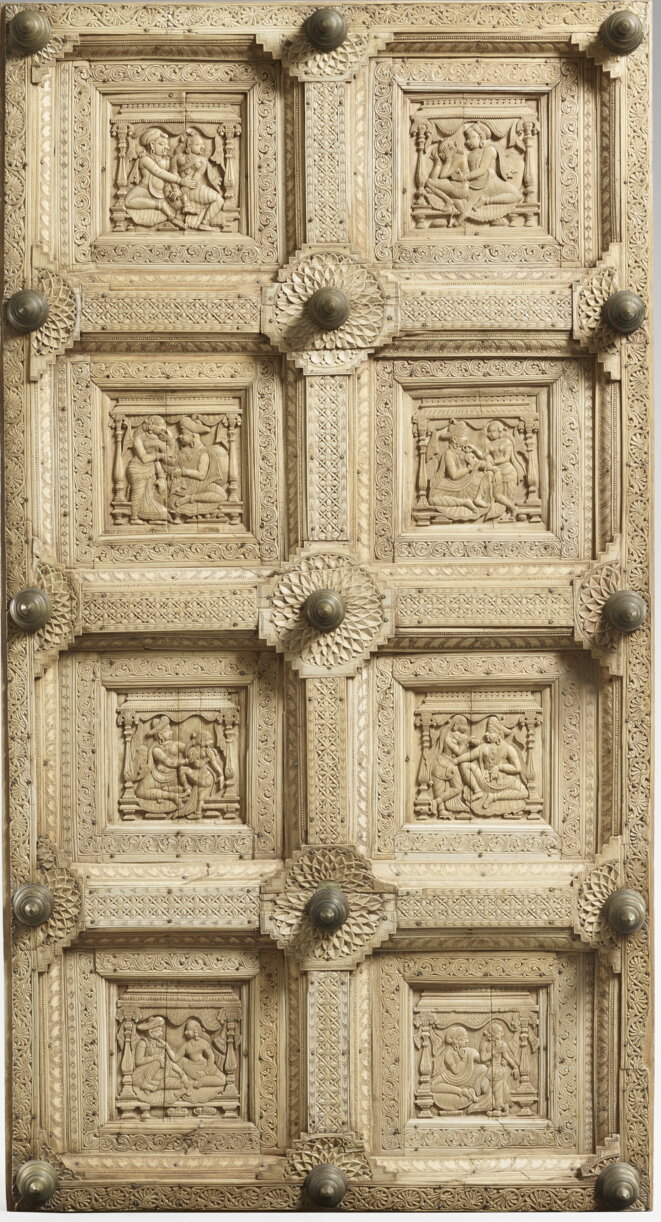 On the Al Thani door the depicted couples are shown in a luxurious palatial setting dressed in courtly manner showing the refined influence of Muslim art, although five masculine figures are wearing a Maratha headress. The fashion spread in Southern India towards the end of the 18th century thus dating the panels. Happiness on earth as the reflection of heavenly bliss is celebrated and sanctified in Hindu tradition. The words of the Franco-Indian yogi who initiated me to yoga prior to my departure to London and my marriage expressed it : ‘When a man and a woman are making love with all their body, all their heart and all their soul, even the angels in Heaven are jealous.’ 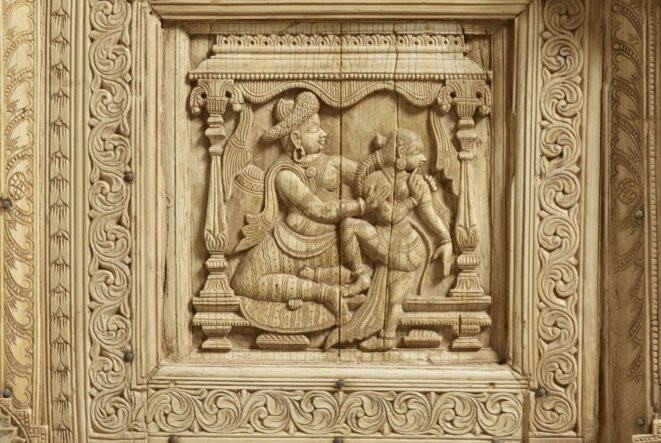 Exhibitions have been organized in San Francisco, New York, London, Beijing, Saint-Petersburg, Fontainebleau, Paris and in Japan.   According to an agreement with the Centre des Monuments Nationaux, the collection shall be presented at the Hôtel de la Marine in Paris in 2020 for a period of 20 years in temporary exhibitions. Cheikh Hamad bin Abdullah Al Thani expresses his love of France : ‘ French history and culture have inspired my passion for the arts, national heritage and collecting. Until now the Al Thani Collection has been shown worldwide in temporary exhibitions. But my greatest wish is that it should be possible to see it as often and by as many people as possible. I could not be happier that the Collection will be shown over a long period of time in a historic building as prestigious as the Hôtel de la Marine. Also that this agreement will contribute to its restoration, as well as to other National Heritage projects in the whole of France.’ The royal family Al Thani lives in Paris in the Hôtel Lambert on the Ile Saint Louis. It was built by the architect Le Vau from 1640 to 1644 before the construction of the châteaux of Vaux-le-Vicomte and Versailles. Voltaire described it ‘a palace fit for a king’, the Hôtel Lambert was modernized and restored to its former glory from 2010 onwards. 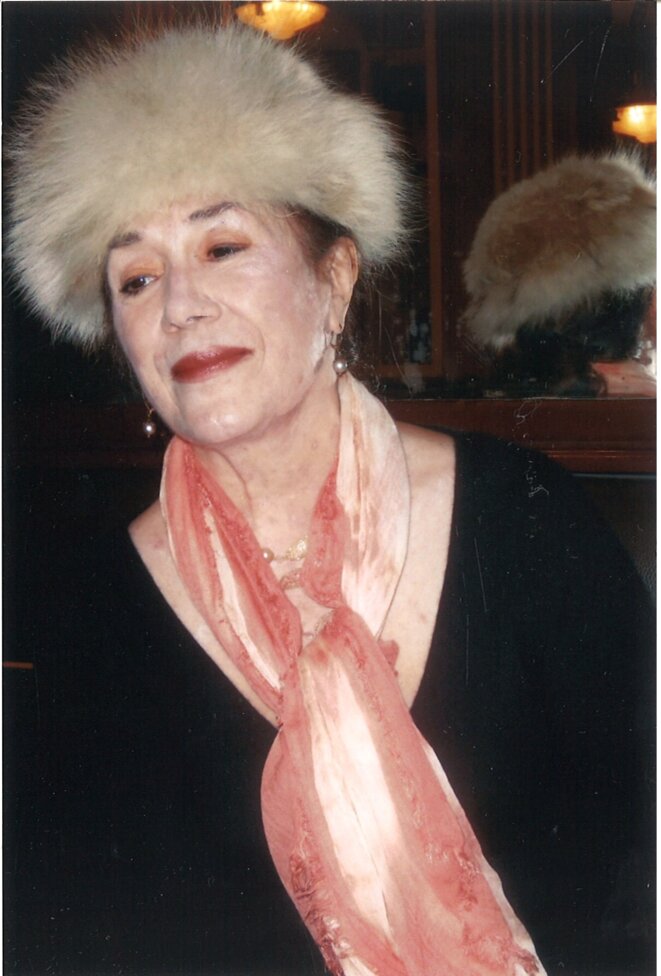