500 Words on the Dreyfus Affair 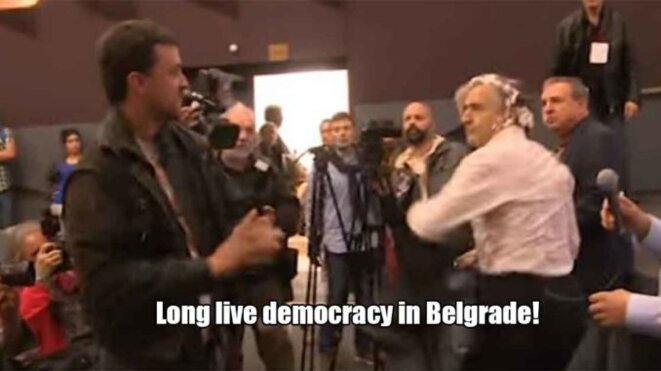 “Murderer, leave Belgrade! Bernard-Henri Lévy advocates imperialist murders!” –French philosopher gets pied in face in Belgrade, 2017
The notorious French intellectual known more for his unbuttoned crisp white shirt than anything else of probable substance, Bernard-Henri Lévy (BHL), describes the intellectual as being, since the time of the Dreyfus case in the 1890s, “the one who positions himself as mediator between the community and the universal, between the state and the ‘true and the just’—as opposed to personal passions.”

The notorious “Dreyfus Affair” of late 19th century France was one of history’s most famous antisemitic incidents. That was probably the point. Theodor Herzl, the founding father of Zionism, later claimed that the massive antisemitism revealed by the Dreyfus Affair was the basis of his personal ideological awakening.

After the 1894 “Dreyfus affair” where a French soldier was convicted of being a spy for the German army for no reason other than alleged widespread anti-Jewish hostility and suspicion in France, journalist Theodore Herzl propagated political Zionist ideas of Israel as the only possible way out of antisemitic hate for Jewish people in European countries.

Prior to 1917, Israel had mostly been a religious ideal within Judaism that most interpreted as scripture related to divinity—not the workings of nation-states. The exception to this ecumenical Zionism was a fringe group that agitated to realize a version of Israel in the real world, as a modern Jewish state where persecuted Jews could find sanctuary from the often violent pressures of anti-Jewish hate.

Julien Benda, who published La Trahison des Clercs (“The Treason of the Intellectuals”) in 1927, was one of the artists and intellectuals who defended Alfred Dreyfus, contributing articles on the case to Revue Blanche, which were later collected in Dialogues à Byzance (1900). The important historical aspect is that self-identified “intellectuals” asserted themselves as a moral force for the first time, which is a really terrible social construct that we still live with today.

The Dreyfus Affair first gave the sociology of intellectuals legitimacy as a group with class-like consciousness appearing to be emerging in the first decade of the 20th century. The expression “intellectuals,” which was informal at the time and expected to disappear once the political crisis dissolved, has somehow endured.

With the Dreyfus affair intellectuals emerged as a social group with a strong sense of corporate identity and a willingness to serve as “legislators” with a sense of authority. The Dreyfus case gave birth to the modern intellectual —a primarily Jewish one. In myriad ways, the story of the intellectual has been, at least since Dreyfus, a Jewish story.

By the same token, the threat of antisemitism became a crucial issue in intellectual life, a kind of moat around the ivory tower. Thus, in the spirit of Karl Marx and his tactic of “reification,” the modern intellectual not only became a thing but it was first a Jewish thing, surrounded by a deep ditch filled with water and maybe stocked with snakes and alligators.