LGBT in Name Only 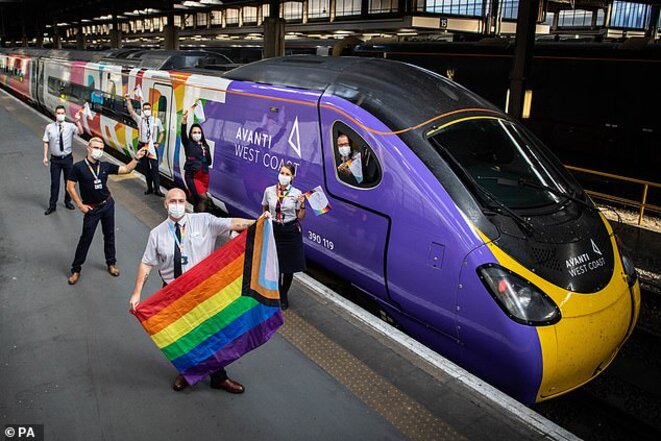 The social justice movement that emerged during the early days of the HIV/AIDS epidemic in the 1980s bears little resemblance to the behemoth LGBT-rainbow-clown-circus operating today. What started out as a grassroots response to the Reagan administration’s genocidal public health polices has turned into a full-blown corporate campaign to rebrand a segment of society. Even worse, this pink-glitter-pony-show degrades the authentic Stonewall liberation movement of the 1960s by collaborating with the original enemy, dominant and oppressive heterosexual Anglo-Saxon corporate culture.

This degrading kind of LGBT propaganda, produced outside an actual struggle, serves to ascribe validity to elite racist politics and undermines those it claims to speak for, turning them into further victims. In this case, gays become victims of the otherwise kindly religious people that are unable to see through the political chicanery and are thus provoked to respond in less than intelligent ways. In recent years the aim of this unserious globalist-rainbow-disco-dance-party is to disturb Orthodox Christians, Orthodox Jews, and Orthodox Muslims worldwide and at the same time throw gays under the bus. Aggressive and very expensive efforts have been covertly implemented in Russia, Poland, Ukraine, Belarus and Georgia, for instance, by the National Endowment for Democracy, George Soros, and other criminals that ought to be shut down.

The Abrahamic religions are too often used to justify harsh mistreatment of gay people, especially when those religions teach that only God is to be the judge of humanity. This Achilles heel has been easily exploited by British colonial powers for centuries. British colonialism is largely responsible for the criminalization of homosexuality around the world. The British left an indelible institutional legacy of the criminalization of gay conduct which still affects today every part of society including the religious and spiritual aspects of life. This, of course, directly engendered harsh interpretations of religious texts about homosexuality, such as the Bible and the Quran. Small mentions of the sins of homosexuality were completely blown out of proportion and fabricated as the biggest moral crimes. But you’ll be hard pressed to find a religious person willing to admit that they had been duped to such a tremendous degree.

Similar to the British laws which made slavery possible, the laws criminalizing homosexuality (which directly affected the religions) set an arbitrary framework for what was considered  “civilization” and amongst an Anglo-Saxon “Christian” elite, a blue print for domination. The British industrial revolution enabled a new kind of slavery, a moral enslavement. The famous 19th century British colonizer Cecil Rhodes had similar policies to those of his German contemporary Karl Marx. Go figure. More than any other individual, Cecil Rhodes did in southern Africa what Marx states was done by the British to “lay down the material premises” for the “regeneration” of India. This was accomplished by exploiting religion and homosexuality.

‪From 1860 onwards, the British spread a specific set of legal codes and common law throughout its colonies, among them laws proscribing male-to-male sexual relations. The British Empire drafted these penal codes with an alleged moral, religious mission in mind. The intention was to protect local Christians from alleged “corruption” and correct and Christianize “native” custom. Two particularly prominent examples are the colonial criminal codes of India and Queensland.‬ In a bold effort to conquer the world through a divide and rule strategy, the keepers of the English language fabricated homosexuality as a dangerous moral threat to the Abrahamic religions. Most noteworthy, the British ruined the peaceful nature of Christianity, and Islam even more so since the September 11th attacks in America. Thus, today there are still Christians who truly believe that HIV/AIDS was God’s punishment for homosexuality. And there are Muslims, well, you know.

Parallel lines are easily drawn between the “strategic culture” of the British Transatlantic slave trade and the criminalization of homosexuality. While the British were the first to enforce such barbaric measures, and achieved the greatest results in doing so, they were the first to reverse the laws, leaving the majority who had followed their laws to hang themselves and to endure suicidal disgrace for a long time. America still has not shed the mental shackles of the British slave trade, even though it was a British and not an American enterprise.

This was all part of the “Great Game” of the British Empire. We live with its legacy. But in 2020, this ye olde colonial enterprise looks more like a disaster than a win for Anglo-Saxon political strategists. It also provides an educational conversation piece. It is another demonstration of Marxist tactics that we can discuss as both voters and consumers. It’s a case of “LGBT in name only.” The cousin of “Christian in name only,” which it turns out is a CIA operation. The “Christians in name only” are paid for their hypocrisy, to give the ascetic religion a bad name. Jerry Falwell Jr. and his wife immediately come to mind. Of course, “Black in name only” is in the news right now as well in the form of “Black Lives Matter” —more of that Marxist strategic culture.

Spiritual people inherently understand that there are some cultural lines you simply do not cross without irreparable breaks to the social fabric. They are unable to effectively navigate the Marxist material world and may not be able to articulate the conspiratorial nature of the LGBT campaign but they instinctively know that it is a violation of their privacy. What is different today is that this kind of cultural conspiracy has completely gotten out of hand, so much so that spiritual people are not backing down from challenging its true nature this time. And they should not. It is a Marxist strategy and should be called out as such —cheap political puppetry.

LGBT is yet another conspiracy meant to wreck any chance of peace and love in the world by sowing division across the religions. Thus, we must make public distinction between acts of the state that are public and open to direct investigation, and acts of the state that are concealed, secret, and indeed conspiratorial.‬ This worldwide campaign is allegedly rooted in equal rights for gays and lesbians, but is driven by a militant atheistic enterprise of greed and power.

Militant atheism is hostile towards religion. Militant atheists have a desire to propagate the doctrine, and differ from moderate atheists because they hold religion to be harmful. In the beginning, militant atheism was an integral part of the materialism of Marxism—Leninism. But they don’t have the courage to publicly voice their true intentions. They are dishonest in every concevable way they can be.

‪I recently wrote a 5,000 word article suggesting that a top line public policy issue ought to be “strategic culture.” This article is meant to help to begin to flesh out that idea.

As a top priority public policy issue we ought to tackle the concept of ‪”Soviet strategic culture‬,” though we can just call it out as “Marxist.” It is 1917 Marxism—Leninism, the official and validating ideology of the Soviet state and its ruling Communist Party fused with the “strategic realities” (meaning the Abrahamic ascetic Faith of Orthodox Christianity) of the Russian Empire forged by the Tsars since the 1400s.‬

Karl Marx played all sides of the British geopolitical game, instituting kind of a geopolitical matrix built on materialism, the oldest philosophical tradition in Western Civilization and the basis for Western Civilization itself and Marxism. This is strategic culture. The living definition of ”strategic culture” is today’s Western LGBT campaign. The current corporate promotion of LBGT has imposed a set of beliefs and assumptions on citizenry as a means of simultaneously building and defending so-called “liberal democracy” in the face of alleged deep homophobic hostility.

Quite remarkably, I found an article that was written 22 years ago before the LGBT campaign, George Soros’ “rainbow fascism,” was ever fully implemented. Of course, without realizing it at the time, the author spills the beans on the entire Marxist LGBT-shiny-bright-conglomerate of the future. While there may have been traces of the campaign it would have been impossible to have known it existed without the most high level insider knowledge. The author is a lawyer, a politician and an ex State Department official who wrongly positions himself as the voice of the Greek Orthodox Church (a non-political institution) and cynically endorses Marxist political technology such as a “false flag” operation. In fact, he came up with the term “rainbow fascism” on his own accord over two decades ago. These days, one cannot hide such a dishonest pedigree and get away with it. It’s not me judging him, the issue is political transparency. If an American politician believes he is free to act in such a clandestine and malicious manner, I am as an American citizen free to out him as part of the political game. And blame the game, not the player.

I think people, in general, are wising up to the political game due to the incompetence of such charlatans. This is an unintended benefit of Donald Trump’s American presidency and a new perspective of looking at the world. Recently, in Britain a “pride train” was launched by a company called Avanti West Coast. The British LGBT community criticized the train launched by Avanti West Coast. Such a train only creates new divisions where there were none before, creating new grounds for discrimination. But what is most important is that some gay people are now rightly very embarrassed by the stupidity of  “identity politics.”

We should celebrate this as a phenomenal development because then this becomes a case where the consumer is king. If there is no profit, there is no strategic culture win for the politicians. The way to stamp out colonialism and Marxism is with our purchasing power. We would simply not buy from sellers who are peddling identity politics.

During the first two decades of the 21st century, the power of Marxist identity politics peaked. However, since Donald Trump came into office, the Marxist strategy has collapsed and is down for the count. Now is the time to kick it, if it is still breathing, to make sure it is not getting back up.