Several mayors of French seaside towns have slapped a ban on the wearing of burkinis, the Islamic full-body swimsuit, on local beaches, citing a supposed threat to public order and even hygiene. Mediapart editor-in-chief Edwy Plenel argues here that the ban is an outrageous stigmatisation of French Muslims in a society that is losing sight of the fundamental rights of citizens.

The characteristic of periods of transition like that we are living through, with all the unease and incertitude that comes when an old world slowly dies and a new world is late in arriving, is the loss of the most elementary markers, and notably the neglect of fundamental freedoms.

Among the principles that are those of a democratic and social republic, there is that of individual freedom. The equality of rights for everyone, with no exceptions due to a person’s origins, their condition, appearance, beliefs or sex, with the only limit being that a person must not impose their own rules upon others, those of (political) ideology or (religious) dogma.

Thus, on a beach, everyone can think what they like about the stances of other holidaymakers (according to their culture, their convictions, their religion), but no-one among us has the right to impose upon others, in an authoritarian manner, their choice, in the manner of a required uniform. So, while I would employ all my force to oppose a move tomorrow by the authorities that would dictate that women must cover up their bodies in public places, I also oppose the prohibition today of clothing that covers a woman’s body on the basis that it is linked to a religion. In both cases we would be giving up our individual freedoms to an authoritarian and discriminating logic which, in the first example, targets women by continuing to make them an oppressed political minority, and in the second example targets Muslims by making them a minority which should be excluded.

Freedoms cannot be divided, and they therefore also belong to those whose ideas or prejudices we do not share. On the condition, obviously, that they do not attempt in turn to impose them in an authoritarian manner upon us – and which is certainly not the case of those Muslim women who, as is witnessed by numerous news reports, go to the beach fully clothed accompanied by friends who are not, and which demonstrates the diversity and plurality of French Muslims. 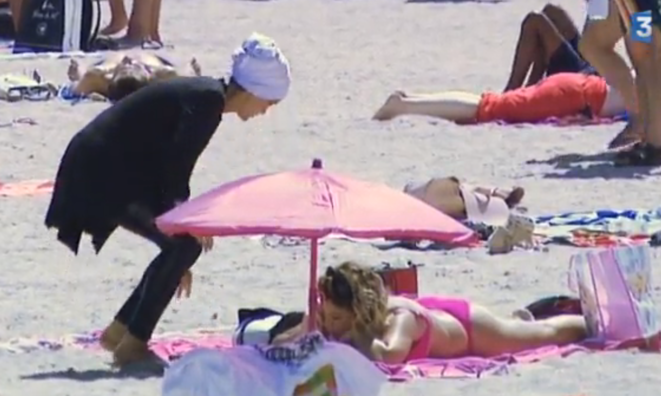 A woman in a burkini filmed with a friend on a Riviera beach in a report by French TV channel FR3. © FR3

Those who make up the intolerant of today might be reminded that in 1905, during the French parliamentary debates over a bill of law for the separation of the church and the State, a number of republican conservatives wanted to prohibit the wearing of the cassock in public places. That suggestion was, obviously, opposed by Aristide Briand (then the Member of Parliament who presented the bill, firmly supported by Jean Jaurès, and who later served as French prime minister), who cited the freedom to display one’s opinions (and therefore also one’s beliefs). Briand was backed by all progressive republicans who, unfortunately, like the others forgot to address the rights of women (including the right to vote) who were excluded from the debate, sometimes justified by the pretext that they were in the grip of religious obscurantism, an idea which, retrospectively, is not lacking in irony.

The supporters, then, of a ban on “ecclesiastic costumes” (like those today who want to ban all Islamic “costumes”), maintained that it was submissive clothing, and that the duty of the republican state was to emancipate priests from their cassock through law (therefore by the force of the law). At the same time, these diehard machos claimed that the cassock, which is a dress, was detrimental to “masculine dignity”. Aristide Briand refused that a law which aimed to “install a regime of freedom” should seek to impose upon priests “the requirement of modifying the form of their clothes”. Addressing parliament, he said: “This costume no longer exists for us with its official character […] As of the moment of the separation [of state and church] the cassock becomes clothing like any other, accessible to all citizens, whether they be priests or not.”

Otherwise put (and Briand provokingly told the all-male parliament that in a regime of freedom everyone was allowed to walk around “in a dress”), if tomorrow there were men who wanted to go to the beach dressed in a cassock, and bathe whilst wearing the clothing, they have the right to so do. In last week’s issue of Paris-Match appears a photo of economy minister Emmanuel Macron and his wife Brigitte visiting a beach, open to the general public, in the south-west town of Biarritz where among the bathers was a naked man who greeted the couple, and who was greeted in return with a smile from Macron. But those who express alarm at the beachwear that covers up Muslim women were not troubled by this perfectly opposite transgression. In both cases are choices that concern individual freedom. If the exercising of that freedom does not include any proselytism (seeking to constrain the freedoms of other individuals), then to accept that an authority constrains it is to open the path to morals established by the State and which have always been the product of authoritarian regimes of all types, whatever their intensity. 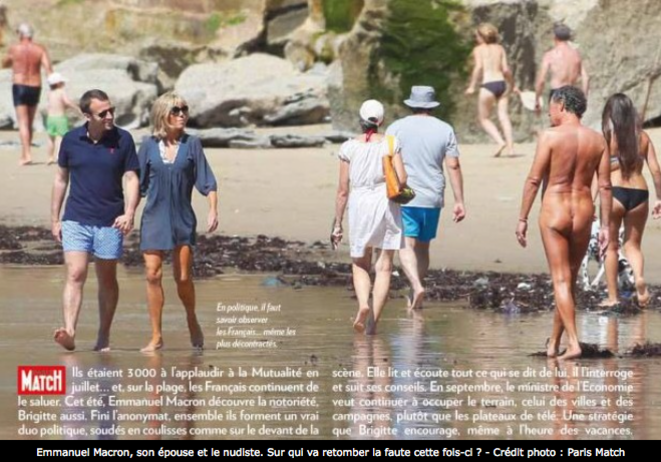 The Paris-Match report of economy minister Emmanuel Macron and his wife on a Biarritz beach. © DR

All these controversies, which have had the only result of falling into the trap set by the Islamic State group (that of stigmatising Muslims by seeking a scapegoat for our fears), are singularly ridiculous when confronted with logical reasoning. Will we tomorrow prohibit, in the name of a refusal of any visibility of religious affiliations in public places, Catholic nuns from wearing their religious headdress on beaches? Or ban Jewish men from wearing the kippah at the beach? Or, again in the name of a so-called ‘neutrality’ in public places, will we prohibit the wearing of T-shirts that carry a supposedly subversive slogan, or supposedly dissident juvenile clothing, or eventually exclude those with long hair, pierced bodies and those with tattoos? 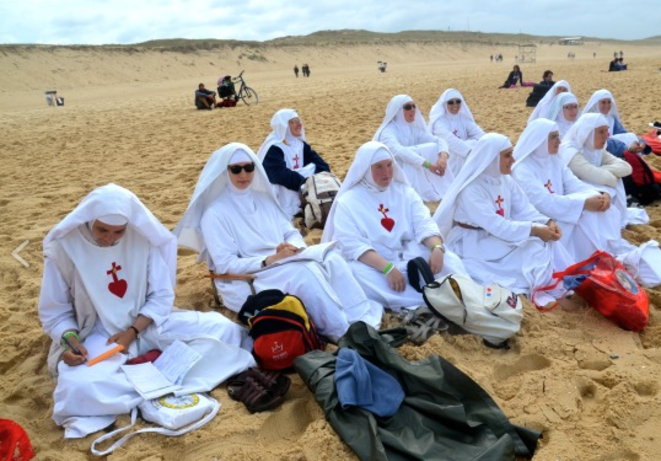 Sisters of the Consolation attending a surfing event on the French Atlantic coast of the Landes region. © DR

When a freedom begins to fade, for an ideological pretext which here is centred on security, it is not only difficult to win it back but also, and above all, it ends up being lost for everyone and not only those against whom the restrictions appeared to target. Tomorrow, according to the vagaries of political life, municipal authorities, governments, private corporations will use the pretext of the ideological restriction of a freedom, whereby body and appearances are the target, to in turn target other attitudes that are considered out of step with their prejudices, their dogmas and their interests. To defend our individual freedoms (among which is our choice of body attire or nakedness) is to defend the freedom to fight for our rights, and to not be submitted to a servitude of the powers that be (whether they be, for example, those of the state, economic, ideological, religious, or sexual).

The second declaration of human rights that emerged after the French revolution, established in 1793 (or Year One of the new republic) was the most accomplished but also the most ephemeral. Its Article 6 proclaims: “Freedom is the power that belongs to man to do everything that does not violate the rights of another; it has nature as its principle; justice as its rule; the law as its safeguard; its moral limit is within this maxim: Do not do to another what you do not want them to do to you.

P.S.: I have added to this post immediately below what I recently posted on social media, a simple appeal for reason when so many other issues (democratic, social, ecological, geopolitical, scientific and so on) should mobilize our energies, as demonstrated throughout the summer by Mediapart’s editorial priorities.

In the summer of 2014 (two years ago, before the terrorist attacks of 2015 and 2016) I wrote what follows further below in my book For the Muslims, now available in English at Verso books (see more detail here). Does it need to be underlined that this warning is more than ever pertinent today, and that it is our duty to support all those who are stigmatized not for what they have done but for what they are, by reason of their faith or appearance? This is the extract in question: “In every corner of the world, the way minorities are treated indicates the moral state of a society […] Beyond the confines of my country, I write against this war of worlds into which there is an attempt to lead people by creating hatred focussed on group identity for which religion is an alibi. But I am in France, I live here, I work here, and it is right here that, for us, this jolt of consciences is at stake. The crimes committed by supposed Muslims, who themselves have sunk into these endless wars, would never justify that in return we persecute the Muslims of France. Never would individual bad actions or faraway conflicts authorise that, in our country, we end up assimilating men, women and children altogether as a peril that threatens the integrity, the purity even, of our national community on the pretext of their faith, their beliefs, their religion, their origin, their culture, their affiliation or their appearance. Never will the disorders of the world be an excuse for forgetting the world, its complexity, its diversity and its fragility.”