“Journalism” has been part of a militant atheist conspiracy ever since 1917 —fake Jews and fake news. 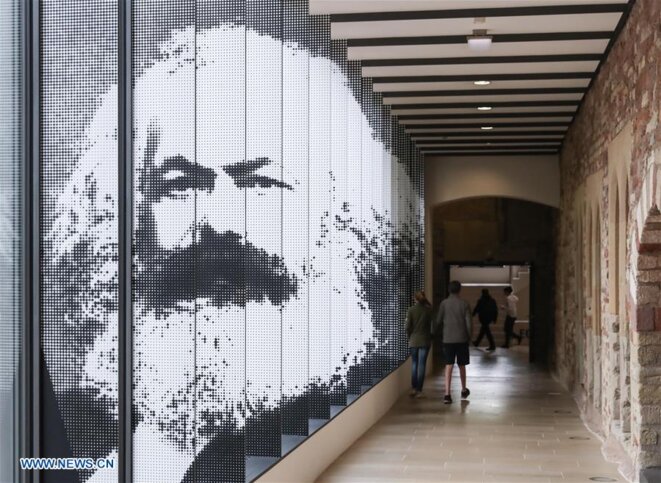 Entrance of the exhibition "Karl Marx 1818-1883. Life. Work. Time." in the City Museum Simeonstift Trier in Trier, Germany, May 3, 2018. © Xinhua/Shan Yuqi
I have come to the conclusion that journalism is Zionist “hasbara” and therefore, by design, is intended to hide the truth. It’s a nasty enterprise. Journalists who don’t play the game are jailed, ruined professionally or murdered. In America, it has fostered a culture of conspiracy.

Hasbara is the Israeli word for how Zionists explain to the world through the Jerusalem press corps their slaughter of Palestinians. It is almost never the truth. Zionist propaganda and the most ridiculous lies. The sole purpose of Zionist hasbara is to side step conspiracy. Of course, political Zionism is a British enterprise, not a religious Jewish one. And the sniper shooting of journalists wearing “press” vests, health care workers, and Palestinian children, in broad daylight in Gaza was part of a British enterprise as well, not a spiritual Jewish one.

Another way to say it is that hasbara or journalism was designed as war propaganda. There’s never any truth in war. Zionism itself is militant atheism and at war with truth and spirituality. That British enterprise was set up that way. Jews in name only. Fake Jews and fake news.

“Fake news” is nothing new. It’s been the standard of so-called “journalism” since 1917. Thus, the practice of journalism is inherently atheistic. It is the primary vehicle for a tiny minority of atheists to rule over a majority of people faithful to some religion.

If we can agree that “journalism” driven by Marxist capitalism is about self-promotion and political gain, not public service and good governance, then we can agree that the fourth estate of journalism in America is being used as a megaphone for propaganda of the fifth column, the British Crown.

Karl Marx is often remembered as a political economist or philosopher. But he made his mark as a journalist. We should see Marx as a journalist first and foremost. His journalism is not lying in the classical sense. His lying uses the vocabulary and structure imposed on elite Americans by the British Crown.

I got my dose of it with the crisis in Ukraine. What’s been revealed in Ukraine over the last six years is that American journalism is primarily an enterprise of the British Crown along with American written history, all part of Britain’s wartime “Western Civilization” propaganda that became our education.

The British Zionist enterprise is driving “the news” in the American media, not American citizens. This is a problem. A pretty big one.

The purpose of journalism in a democracy is to criticize the government. As we’ve now seen time and time again, that is simply not happening. We’ve no voice as Americans. We might as well be living in the Soviet Union or Nazi Germany.