Iconography for the Intellectually Inhibited 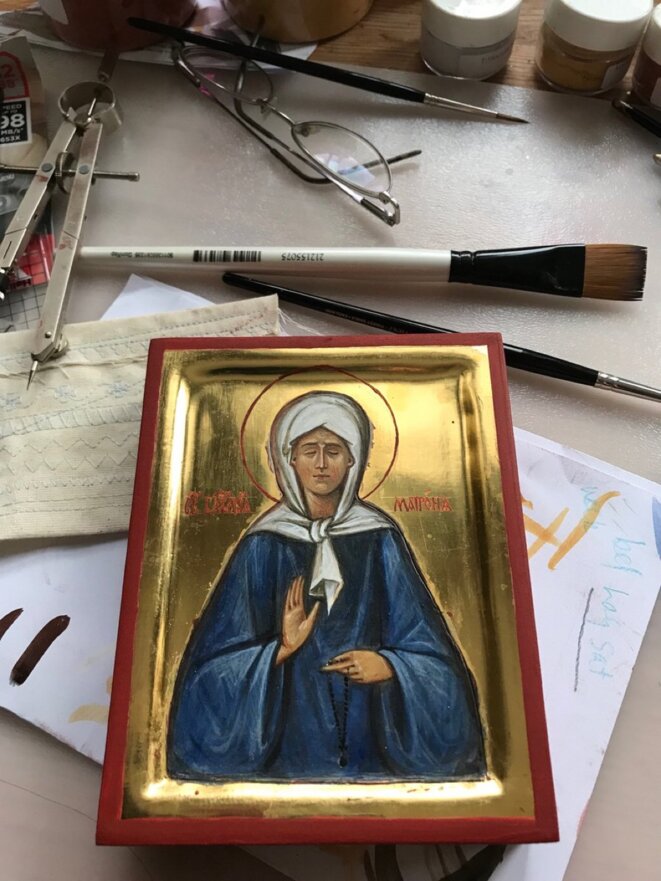 We are often misled by things that people who represent themselves as historians, economists, or intellectuals say.

Tradition is a hallmark of the Eastern Orthodox Christianity, which is inconceivable without Byzantine style gold leafed icons, the glow of lighted beeswax candles and the oriental fragrance of burning incense in public worship. The Orthodox Church itself is tradition, and the presence and use of iconography is a reflection of that tradition of early Christianity.

The icon is the result of the synthesis of three different cultures: Greek, Roman and, of course, Christian. The technique of Byzantine iconography traveled beyond the frontiers of the Empire, having a profound influence on the development of iconography elsewhere, especially in the Slavic nations.

The icon is not nearly a piece of art, but an aid to worship, and an instrument for the transmission of the Orthodox faith. The icon is not an aesthetic object, but its purpose is to transport us into the spiritual world, to go beyond our material world. Some call this mysticism. Thus, icons are not three-dimensional and perspective in the icon does not exist. The transformative nature of iconography requires that it is a school of strict style, material and exact use of light, gold leaf and color, not to mention prayer and religious reverence. The iconographer does not have a creative license. In iconography an icon is not painted, but written. The process of writing an icon is long and tedious. Many hours, weeks, sometimes months are spent in the creation of an icon, depending of course on the size and complexity of it. As such, Orthodox iconography can only be properly appreciated in the context of the Orthodox faith.

“The Orthodox icon is painted in accordance with the Byzantine canon, our canonical tradition was fixed in both volume and interpretation by Byzantine canonists, in Byzantium there took final shape that list of the Fathers which has hitherto been the basis of Orthodox theology and, finally, in this period there first flowered that manner and spirit of piety which is well expressed in Russian by the word tserkovnost. In a sense the Byzantine period must be acknowledged as decisive in the history of Orthodoxy, and recognized as the age of the crystallization of church life. The modern Orthodox Church is — from history’s viewpoint — the Church of Byzantium, which has survived the Byzantine Empire by five hundred years.” ~Protopresbyter Alexander Schmemann, 1959

“Iconoclasm” refers to a period that shook the Byzantine Empire for more than 100 years and the destruction of Orthodox Christian icons by political activists and their open hostility towards the religion. Behind any political campaign is the political campaigner: the activist arrogantly convinced of his own righteousness.

When it comes to iconoclasm, today’s Western-minded “intellectual” looks like a rowdy trust-fund college freshman. Dirty clothes are strewn about pell-mell in his dorm room and there’s an old pizza box next to a bong on the floor. His time is spent in activities related to rushing for a snooty fraternity, seeking popularity and acceptance among his peers and developing a life long network of material prosperity. But his gaps in knowledge and understanding are simply self-imposed limits of cultural background, probably not a lack of aptitude or application. Today’s “expert” is that frat boy and the Greek fraternal system that we call academia discourages free will and thinking on one’s own.

Because this intellectual function in the West is MIA (missing in action) at a “kegger,” most likely the biggest issue with the discussion of iconoclasm and thus iconography is widespread public misunderstanding. Once we clear the Western-minded intellectual limitations from our own minds, we clean off our mirror of reality, too. Then we see that iconoclasm is a frighteningly intense and quite militant hatred for religion.

This deep-seated ill will toward religion began in the early 8th century and subsided toward the end of it. Emperor Leo III the Isaurian publicly took a political position against icons; this resulted in their removal from churches and their destruction. Then, Emperor Leo V the Armenian initiated a second period of iconoclasm in 9th century, but in 843, Empress Theodora, one of the most powerful women in Byzantine history, proclaimed the restoration of icons. This event is still celebrated to this day in the Orthodox Church as the “Feast of the Triumph of Orthodoxy,” the first Sunday of Great Lent. In the 10th century, there was a mass baptism of Eastern Orthodoxy, Russia which included today’s Ukraine and Belarus.

Since the 9th century, campaigns of iconoclasm have been recurring with some frequency — in the French Revolution of 1789, in the rise of the American Civil War in the 1850s, and again with the Bolshevik Revolution in 1917.

Since the French Revolution, the breaking of images and destruction of idols has been linked to the rhetoric of progressive revolutionary politics. When, in fact, it is the same intense hatred for religion that swept Rome for a century. But by the 18th century, Catholicism in France was already very much a political enterprise and while it ought to be condemned today as vandalism and a barbaric disrespect for the sacred, it has been glamorized as revolutionary. Les Misérables has widespread appeal and completely whitewashes the heretical nature of a purely political act, a strategy to obtain power and station by destroying religious liberty. Hence, it should be no surprise then that most people are ignorant to the true nature of iconoclasm from the ground up. And it crossed the Atlantic.

The fanatical sect of English Puritans who settled in the American colonies were iconoclasts. However, since the Puritans' iconoclastic writings and actions were based on deceit, they marketed them to be seen as primarily theological, rather than political. Puritan iconoclasm of the 1640s was as notoriously slippery and insidious in its own time as the iconoclasm that remains today. The famous Puritan Oliver Cromwell who claimed war victory for satan holds the key. But it remains impossible to explain the achievement of Oliver Cromwell in any simple political terms, whether of the unification of the UK, or of colonial expansion and imperial policy.

With all the talk of Bolshevism these days, it is important to remember that Bolsheviks are first and foremost militant atheists, and militant iconoclasts. Because today militant atheists are secretive about it, calling themselves “humanists” and such, unlike the militant atheists in Russia in the early 20th century. In fact, it was a public function of the Soviet government, the League of Militant Atheists, storm troopers who claimed the lives of hundreds of thousands of people.

Through their own newspapers, from 1922 onwards, the Bolsheviks carried widespread anti-religious campaigns, targeting priests and Christmas festivities. Most vulgar satires were written to ridicule the religion. Members played an important role in disrupting carnivals and other religious gatherings, chanting slogans “Down with the priests, down with the monks. We will climb to heaven and chase away the Gods.”

Churches and mosques were consequently demolished systematically. The League members arrested, shot, and sent to labour camps bishops, priests, and lay believers in the Christian parts of the USSR. Thousands of churches and monasteries were destroyed, shut down, or converted to local government offices, inns — and in extreme cases into bars.

Local chapters of the League of "Godless People" used similar tactics in Eurasia. Lakhs of religious leaders were arrested and purged in the first few decades of the Soviet rule in Central Asia alone. As was done to churches, mosques, shrines, and madrasas were either destroyed or converted to local offices, or to more degenerate uses.

Inasmuch as it will appear that I am defending Orthodox Christianity, it is intellectual honesty that I bring to bear. An honest history of iconoclasm does not exist in the West.

In a world full of people where intellectual dishonesty appears to be striving to reach new heights, a thinking person not impressed by what passes for intellectual thought possesses the most freedom. Because Western-minded intellectuals today do not possess free will. They simply do not. Not to mention that politics, the quarters that today’s intellectuals occupy, not only leaves the door wide open for intellectual dishonesty, but actually encourages it. Academia is like Greek life, insular, archaic and toxic. Academia like fraternities are held to such a low level of accountability that ignorance grows and spreads, seemingly unfettered.

Iconoclasm is first the deliberate systematic attacking or destroying of religious images of the Eastern Orthodox Church. But since the French Revolution it is sometimes undetectable. The political revolutionary is the person most inclined towards iconoclasm, because both revolution and iconoclasm are rooted in militant atheism. This intolerant ideology, which refuses to accept the co-existence of science and God, is thus threatened by the latter and seeks to erase any form of authentic public worship.

The political activist truly believes that he has the right to retrospectively edit our history for his political aims by removing religious traditions embedded in the memories of generations. By any other name this is militant atheism. Iconoclasm is total domination, imposing the will of a minority group over an entire majority population, asserting control over all aspects of society in every deceptive and dishonest kind of way.

Early stage iconoclasm in America, the proliferation of the corruption of Christianity, is first about the absence of the purity of the icon. It is a preliminary stage that leads to more extreme acts. Iconoclasm precedes criminalization, confiscation, imprisonment, exile and genocide.

Iconoclasm is part of a nexus of the activity of a militant atheist minority seeking to exert control over a religious, often silent, majority. Unless iconoclasm is met by widespread condemnation or disinterest (as it was in the Soviet Union), the push to take more extreme measures will expand outwards.

Iconoclasm is persecution and cultural genocide. This is what barbarians do. A systematic destruction of a religious group. It is iconoclasm as a state-sponsored campaign of fabricated “modernization” with the aim of erasing history. The digitally transmittable and infinitely reproducible image plays an unprecedentedly prominent role in contemporary society. Since WWI our American culture has been pushed and prodded to re-inventing and re-refining itself, insidiously, on a daily basis to keep pace with that fictitious notion of modernity in a clandestine effort to erase Christ. The cult political economist Francis Fukuyama, in his book The End of History and the Last Man (1992), was writing about the end of Christianity.‬

The Russian village of Palekh, 360 kilometers to the east from Moscow, was a famous center for icon painting, dating back to the early 16th century. Icon painting was a family occupation and the craft was passed on from one generation to another. But under the militant atheist Bolsheviks, artists instead crafted papier-mâché boxes, blackened with mud from the Teza River, and painted the black lacquer boxes in meticulous detail with scenes from Russian fairy tales. At the time of the 1917 Russian Revolution, some 300 icon painters inhabited the village and turned to the soft iconoclasm of Palekh boxes. Seventy five years later, with the the collapse of the Soviet Union in 1991, the renaissance of the Russian Orthodox Church revived icon painting in Palekh. Of the estimated 600 artists in Palekh today, a village of 4,800 people, only about 15 to 20 concentrate on the Marxist lacquer boxes. The majority focus on the spiritual iconography of the Orthodox Church.

Around 90 million people out of a total population of 125 million identified themselves as Orthodox in the 1897 census in Russia. After enduring a 70-year period of atheistic Soviet rule, today, 103 million of the 145 million Russians identify as Orthodox Christians.