A silver lining of the totally unnecessary coronavirus quarantine: faith 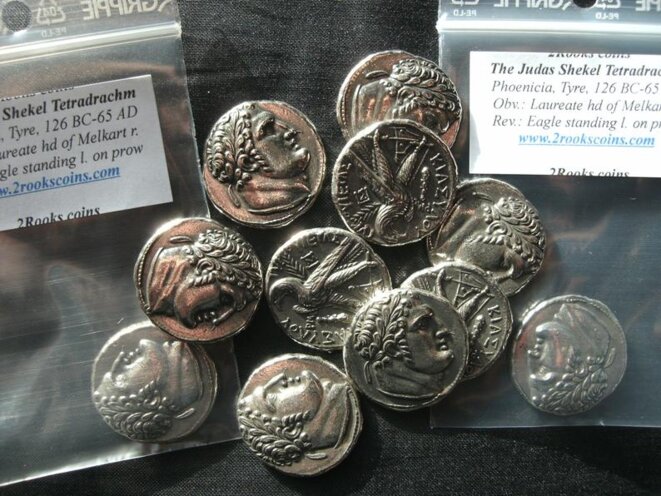 Biblical silver pieces for sale on Etsy
A silver lining of the totally unnecessary coronavirus quarantine is that other people are isolated—particularly the politicians and specifically the red-brown politicians, pundits, corporate mass media. The other colors now dominate. The sky seems bluer, the grass greener, and the sun more full of hope.

It is important to support life, especially during the most tragic periods, and to keep faith that your life is not meaningless, that its circumstances are not random, and there is something inimitable and unique about your journey. Choose life and reject red-brown hopelessness.

I am finding lots of things oddly poetic about the coronavirus political scam and this period of isolation. In particular, the truth that people are not dying from the virus but from terminal conditions they already had, is strangely comforting. Like, truth will always prevail.

For everybody else it would be hard not to use this time not to do some hard thinking. Really clear our heads. Clean our rivers of thought. Muddy water always seems deeper, but the truth is just the opposite. Wash off the dirty red-brown dogma and free your mind. Seek truth.

I think this period will be traumatic for most people but not for the reason you think. The pandemic is giving people time to really think hard and that is especially difficult for a lot of people. They’ll recall this when we’re all back in the physical world. We’ll all benefit from that!

When we’re all outside together again, the sky will seem bluer, the grass greener, and the sun more full of hope. Because the yellow star will have fully disinfected the red-brown hatred in the world. The real virus. Hatred.

Truth doesn't care about our governments, our ideologies, our religions. The truth is that coronavirus is a hoax—it is being misrepresented as an emergency and it is not. Red-brown politicians are using it as an excuse to be openly authoritarian. We’ll remember this and them.

We are currently living through historic times. The truly authoritarian states and the authoritarians themselves are now visible as a consequence of the coronavirus. Take a good look at Canada. Pay close attention to those red-brown who are using this opportunity to discriminate against and persecute people Orthodox in their faith.

America was founded on some awesome values, like faith. Thus, religious liberty is at the top of the list. Because the ascetic Abrahamic religions (Orthodox Judaism, Orthodox Christianity, and Orthodox Islam) give us the power to think for ourselves and not to be influenced by others. With red-brown influence, as a nation, we may have lost sight of that and also of ourselves.

‪That red-brown influence in America is only made possible by money. Like the thirty pieces of silver, the price for which Judas Iscariot betrayed Jesus, according to an account in the Gospel of Matthew 26:15 in the New Testament. Money has been used in attempts to kill Orthodox faith (Orthodox Judaism, Orthodox Christianity, and Orthodox Islam) since the beginning of the counted days. Nothing has changed.‬

I am starting to think that the coronavirus will bring on nothing short of a resurrection of humanity and a transcendence of the highest order. “New World Order” and “U.S. exceptionalism” will forever be no more. People have returned to their homes, the world over. Some having to travel from another country to do so, such as American “expatriates” who were implementing the New World Order in places like Ukraine. But now we’ve quite suddenly returned to Westphalian sovereignty, it seems. The New World Order was unable to provide for basic needs including personal safety and healthcare. The global state governed by those authoritarian methods has now been abandoned. Thus, the world economy will transform from a transnational one to the sum of national ones.

That kind of red-brown authoritarian world power ran on filthy, dirty money. We are already seeing the big multinationals begin to crack. NATO, the IMF and the World Bank have lost their cachet and that is a really good thing. Those prestige transnational structures have lost not only their relevance but will soon also lose their power. Corporations and the global overlords like Bill Gates, Jeff Bezos and George Soros will, too, lose their power.

When this red-brown chaos is over, I believe that we will not return back to that New World Order. We won’t. We’re done. Because many people will have been re-awakened to the values of home, family, community, kindness and faith. And faith disinfects the red-brown virus of fascism-Bolshevism and its nihilistic pursuit of world power with American money. Fascism and Bolshevism both heavily rely on coercion as part of state propaganda. We see that now in action in Canada. It’s truly awful to watch happening. The video I linked to in the eighth paragraph makes me want to cry, vomit and scream, all at the same time.

To be clear, the media mischaracterizes red-brown as a convergence of political opposites and bases the present day on a counterfeit history of World War II. Underlying their “red-brown” concept is their false alignment of the Soviet Union and fascism. I speak of Bolshevism, not communism in the Soviet Union (which some call “Stalinism.”). There’s a big difference which we can only speak of today but not adequately explore. There’s been very little intellectual curiosity or consensus about the politics of Bolshevism and Stalinism, their history and relationship, indeed, these labels have sometimes been employed inexactly and interchangeably. I care most about isolating Bolshevism and placing it alongside German fascism, because both survived with Wall Street investment and both are radically atheistic at the core. There is not one deadly sin of Bolshevik theory which did not become Bolshevistic reality under Lenin. Thus, the bourgeois character of the Bolshevist movement is fascism: nationalism, authoritarianism, centralization, dictatorship, terror-rule, and such. All these essential characteristics of fascism did and do exist in Bolshevism. Fascism is merely a copy of Bolshevism. For this reason, the struggle against the one must begin with the struggle against the other. As Otto Rühle famously wrote, “the struggle against fascism begins with the struggle against Bolshevism.”

Red-brown is a color, not a color pairing. That particular color. And a bloody stool is an indication of disease.

When all of this is over I hope we are living in a decentralized world. The coronavirus scam has the unintended power to make that happen. The emergency levels assigned to this flu-like virus were a political hoax, courtesy of Bill Gates and Johns Hopkins, intended to further advance the creation of a authoritarian “world government” run by multilateral institutions, corporations and the very wealthy. I have faith that that project will fail. Coronavirus is just the latest hoax cooked up by Wall Street types, like so many other events, meant to profit from the despair of others and gain corporate power by manufacturing fear and hatred in them, and Bill Gates’ vaccine business will be the biggest winner. But this one is also very different. Because it is going to fail, in tricolored America, at least.