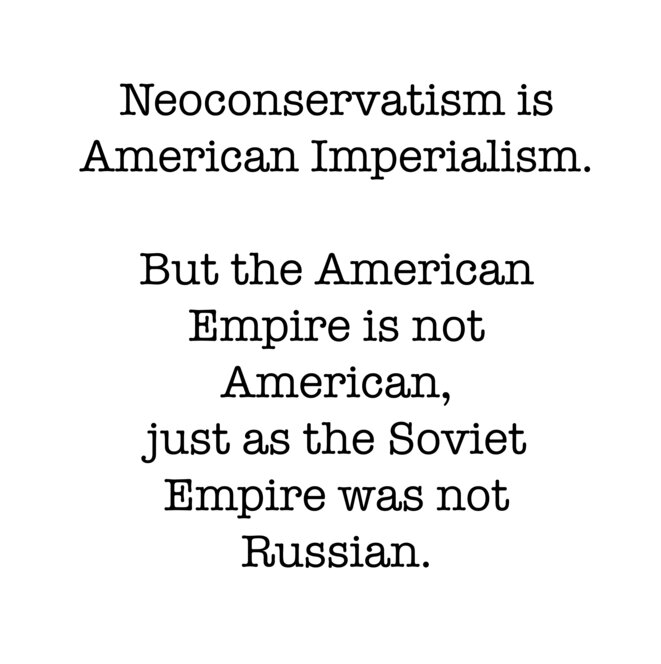 I have come to the end of an important chapter of my life that is both professional and personal. The Neocon Hoax has been solved. You can draw a straight line between that short post written over a year ago and this quick post with the 65 other long essays in between (five recent essays also appear in French). I have documented everything.

Blame it on the plunders and ultimately blunders of the Neoconservatives in Ukraine. Ukraine has taught us all many lessons. And now everybody in the so-called “intelligence community” who ever tried to influence me has been documented on Twitter. We can go back to 2012 and start there.

The United States is not a nation. The U.S. was a republic and has been run as an empire since 1945. Neoconservatism is American Imperialism. But the American Empire is not American, just as the Soviet Empire was not Russian.

If I had known this over 30 years ago, I would have chosen a different career path, believe me. Things will be quite different going forward. The U.S. begins a new volume in history. This truly is the beginning of the end of what we’ve known to date.

For example, once you recognize that the U.S. is run like an empire and Congress serves as a Roman Senate, then you understand that every single congressman is incapable of serving in a democratic capacity. They will never do what’s right for the American public. They are idiot courtesans. That is one very small example of viewing America differently with our new information.

The American Empire can now be seen. Neoconservatism is its ugly visage —The Neocon Hoax.