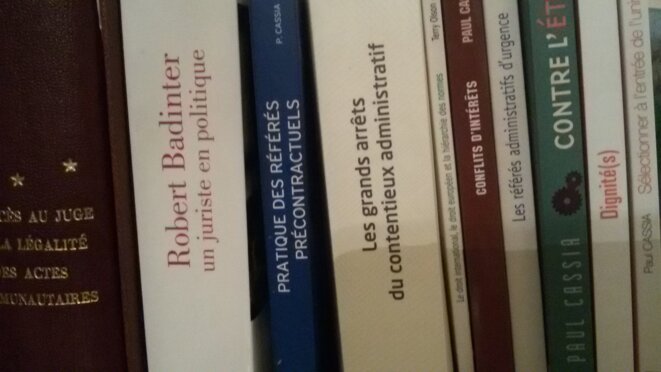 I am very honored to welcome you in my university, Paris 1 Panthéon-Sorbonne, in front of these 500 students very willing to see you, to listen to you and to talk with you.

Five and a half years ago, in June 2013, you were meeting three journalists in Hong-Kong.

At this very moment, you revealed to the world the illegal methods of the US intelligence services, in particular those of the National security agency (NSA).

You informed the public of the NSA’s uncontroled and unending appetite for surveilling and intercepting almost every single personnal data, including those of heads of States, with the program PRISM.

The NSA then pretended its programms were ment to fight against and prevent terrorism. But the NSA admitted in 2015 that not a single terrorist attack had been avoided thanks to their efforts.

Since then, your actions have been worldwide famous.

They have already had consequences in law.

For example, on the 6th of Octobre 2015, the European Court of Justice gave a very famous judgment regarding the « Safe » Harbour, this agreement between the European Commission and the United States authorizing some compagnies to use the personal datas of their customers. The ECJ quoted the Irish High Court, stating « the revelations made by Edward Snowden had demonstrated a ‘significant over-reach’ on the part of the NSA and other federal agencies » (« les révélations de M. Snowden avaient démontré que la NSA et d’autres organes fédéraux avaient commis des 'excès considérables' »).

Since June 2013, the name Edward Snowden has become a universal password : using it opens every single door.

Let me give you some practical examples, related to this conference.

Sitting behind this desk, there are three very dear friends of mine.

Two of them you already know and have met :

Patrick Weil, a historien, my colleague in this university, a specialist of laicité, equality and citizenship among many other matters, founder of the association « Librairies without borders » that dispatches books and culture worldwide.

William Bourdon. He works as a barrister. He came with all his staff here ; two years ago, they published a book against the state of emergency – l’état d’urgence. But much more than that a barrister, he is a man of convictions, the founder of the NGO SHERPA that fights against corruption all over the world, a soldier of civil liberties.

Two months ago, my two friends here called me, saying that were planning to make a conference with you, asking if I would be interested in participating. I answered YES at once. It was like a reflex, something natural.

The third friend of mine is my other colleage Judith Rochfeld, a law teacher, an expert in new technologies. She believes that the internet is a common good, and supports the principle of net neutrality, considering that the internet must be a free and open technology. When I asked her if she could be there tonight with us, she immediately answered positivly. Because it was you. She was enthusiastic.

We needed support for such an event.

I asked two student associations – Débattre en Sorbonne and Alliance Sorbonne – if they could help us. One of its reprensetatives is sitting at the desk, Victoria Priest – she is also one of my students this year. They also were enthusiastic. I thank them all for taking this conference so seriously. I hope it twill remain as a one of the best souvenirs of their student’s life.

I asked the technical staff of my university to help us make the connection with Russia, and they instantly have been very excited by this prospect. They did an incredible job in a very short period of time. They have been spending hours in this auditorium, giving everything they could for the success of this special moment. Thank you so much Philippe Crave, Alexandre Lacroix, Romain Hennebicq, Julien Rabin, Hugo Mathey and Benoît Roques.

Thousands of people were willing to attend this conference. When three days ago the reservations were opened, the 500 seats of this auditorium have been booked in... three minutes !

Such a unanimity is unique.

Let me come to something more personal.

Preparing this conference, I have been watching with my family many documentaries, films or reports about your action.

In one of these reports, there is an interview of a general, former director of the NSA, in which he considers that you, Mr Snowden, are a coward, a traitor, that you betrayed your own country.

Just after his interview, we heard Mr John Kerry, Obama’s former Secretary of State, confirming that from the point of view of the American administration, you were a traitor.

And then you appeared on the screen, explaining why you did what you had to do, because it was your duty as a citizen.

And all of a sudden, while you were speaking, one of my 14 years old daughter said : « I love Edward Snowden » !

Nobody in France knows the existence of this general. One day, his name will be forgotten even in America ; so will John Kerry’s.

But yours will remain as a symbol of liberty and resistance against oppression, which is a constitutionnal right under French law.

Five years after, it is possible to say that you have won the fight for human values.

You are the exact opposite of Orwell’s Big Brother. You are « Big Bro », the first hyper-citizen as William Bourdon called you once.

But you are paying a heavy personal price for this.

The weeks following the reveletions you made, while you where in Russia, you have been seeking asilyum in 21 countries. One of them was France.

I was in a lawyer’s association at this time with William Bourdon, and on behalf of this association we published on Mediapart - a French online media – an open letter to président François Hollande, the title of which was « Accorder l’asile à Snowden, pourquoi non ? ».

Had your request been accepted, you could have been there in person, among us, in Paris, sitting in this auditorium.

But on July 4 2013, the French minister of the Interior published a communiqué regarding your arrival in France. It said :

The French constitution contains an article, in its Preamble, that says : « Any man persecuted in virtue of his actions in favour of liberty may claim the right of asylum upon the territories of the Republic ».

France officially denied that you committed an action in favour of liberty. As a lawyer, as an academic, and much more than that as a French citizen, I firmly believe that this decision was obviously wrong, not to say illegal. It is a disgrace for the land of the Déclaration des droits de l’homme et du citoyen.

You have to know what everybody in this auditorium is aware of : the minister who wrote these words cannont be trusted. Moreover, he doesn’t live in France anymore. He is now trying to be elected in Spain.

But you are still in Russia.

Five years later, the questions to be asked are these : are our civil liberties strengthened or weakened since june 2013 ? Can we avoid a society of surveillance, when it seems today that there are no more frontiers between public space and privacy ? When it is impossible to walk down the streets or drive without being seen and recorded by cameras, when it is impossible to use a phone without having the assurance of not being seen, or geolocalized, or taped, when using social media platforms implies being tracked and being predictable, and when the Parliaments themselves decide to legalize massive interception systems. When, just like in Orwell’s 1984, we are not watching TV, but the TV is watching us !

The fondamental question is this one : how do we people want to live ? As products, the cookies of the web sites we visit ? As subjects of the States, constantly scaned by some secret administrations for the sake of security ? Or as citizens willing to have a fair balance between, on the one hand , the respect of public order and, on the other, the fundamental right to privacy and the exercice civil liberties ?

Mr. Edward Snowden, do we still have an option ?