Between the Eyes of the Octopus

Metaphors galore, because everybody is afraid to bring up Israel. 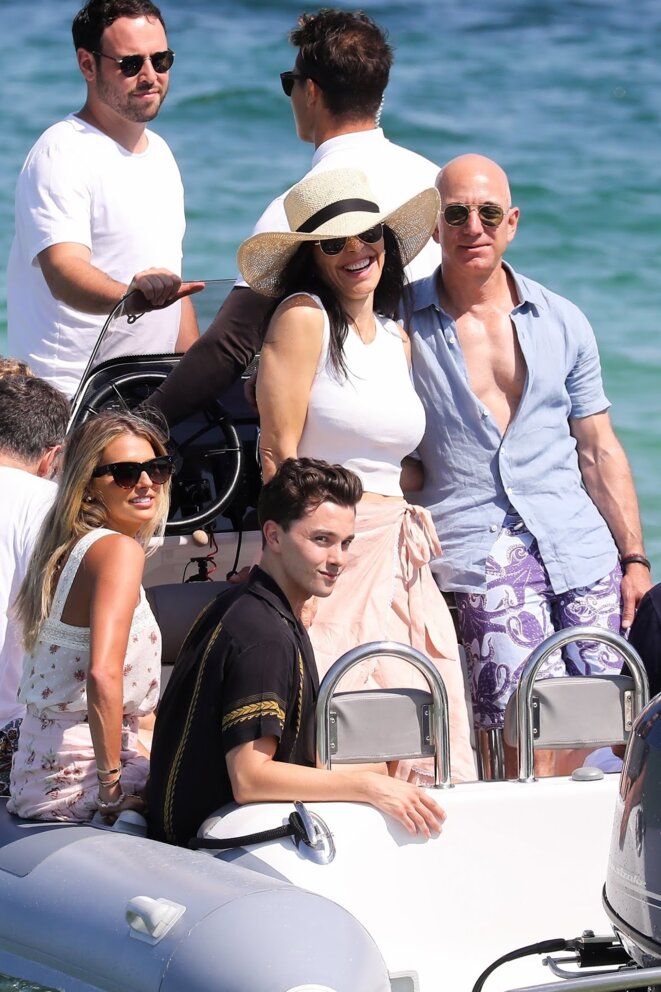 Mr. Bezos, wearing the $260 purple octopus swim trunks, with Ms. Sanchez in St. Tropez in August, 2019. © New York Times
In late 19th century America the octopus seemed, metaphorically, to be everywhere due to the growing awareness of the extent to which large, centralized, interlocking networks of distribution, organization, and administration were shaping American life.

In the 20th century, the “octopus” described the industrial hub of Anglo-Saxon colonialism, slavery, Bolshevism, Nazism, Zionism, NATO, CIA, MI6, MOSSAD, the Israel Lobby, and those who control the world economy such as financial barons in the City of London, Wall Street, oil trusts and multinational corporations. All “tentacles” of the octopus or the architecture of the post-World War II global structure.

But let’s get one thing straight before we continue. The concept of an “octopus” is straight up propaganda. That is the point, the reason I am using it. Donald Trump has skillfully employed this tactic with the likes of “deep state, “fake news,” and, yes, “the swamp.”

For the world’s elite, subversive language must be constantly reinvented, because truth is continually being co-opted by those powerful enough to do so. It is the raison d'être of today’s media industry and specifically papers like the Washington Post.

Guess who owns that paper? Jeff Bezos. Look at what really is happening and what is being reported in the Washington Post are two entirely different things. Bezos is a good representative, because in the 21st century the octopus moved on line. Technology barons are now a plenty lot. I hate labels but it could be called “technocracy,” which let us define as as the control of society by an elite of technology lunatics, like Jeff Bezos. The reality is much less grand.

Most octopuses have eight arms and no tentacles. Generally, arms have suckers along most of their length, as opposed to tentacles, which have suckers only near their ends. The best way to kill an octopus is to stab it between the eyes where the brain is located, killing it instantly

If we think about “the swamp” using another propaganda idea, the “octopus” as fundamental to the identity of U.S. President Donald Trump’s financial “opposition,” its quick demise is located in the tender spot between the eyes.

Thus, I find the ongoing drama in our so-called “intelligence community,” who are vital to the octopus, very satisfying. It means that the swamp is continuing to drain. This is happening because no new wars have started under Trump and while it is bit of a sham, his Israel peace accord is still a peace agreement.

The Atlantic swamp water was so dark and deep that nobody really knew what was living in its various levels until a level was drained. We’ve gotten down to Israeli gangsters. This is why it feels like the U.S. is an oligarchic plutocracy. It is certainly not that propaganda idea.

We need to revisit the Revisionist Zionists and the Irgun, (yes, the really bad guys), who arrived in 1940 in the U.S. together with a core group of Zionist militants, led by its founder, Vladimir Jabotinsky. He also happens to be the “father of modern terrorism.” Oh, yes.

At the height of the Bolshevik Revolutionary period, Vladimir Ze'ev Jabotinsky, Revisionist Zionist leader and Jewish Public intellectual, spent the years 1900 to 1925 in Russia. Remarkable. The years were crucial to Jabotinsky's development as a thinker, politician, and Zionist.

The Zionist movement first developed predominantly in the Russian-annexed part of the former Polish-Lithuanian Commonwealth before WWI in reaction to the alleged hardship during the last decades of the 19th century and the beginning of the 20th century in Ukraine and in Russia.

The first waves of emigration to Israel were made up almost exclusively of Ukrainian and Russian Jews. It was mainly from the Russian Empire, not from Germany or England, that Jews were leaving for Palestine at the turn of the century. They left for perceived political reasons.

Zionism was a purely political project from the start. On the left, Zionism represented Marxism. On the right, Zionism was represented mostly by Vladimir Jabotinsky. Two sides of the same coin, a Hegelian dialectic manifestation. Exactly different but exactly the same.

Since appearing on the international stage in the 19th century, Zionism has evoked extreme positions across the political spectrum. And nowhere have its meaning and aims been more hotly debated than amongst Zionists themselves.

Russia is quite important in this particular case, but is somehow never ever mentioned. Little attention has been paid to Zionism’s technocratic elite and its colonial models in forming the Jewish nation-building of Israel. Jabotinsky was a technocrat.

Jabotinsky roamed far and wide, helping create the British Army's Jewish Legion in WWI and later founding a number of Zionist organisations. He played a complex game of identity. Jabotinsky was an Odessan and Jewish, and juggled those identities to suit the needs of the moment.

When you look at the cancer that has spread from Israel, we should not be surprised by it. Israel has been driven by Jabotinsky. Likud’s ideological forebear was a schizophrenic. The philosophy is one of modern terrorism. Israel’s longest serving Prime Minister Netanyahu is his direct disciple.

Benjamin Netanyahu spent most of his teen years living in the Philadelphia area, where his father, Benzion Netanyahu, was founder Jabotinsky's secretary. Binyamin Netanyahu in effect continues the strategy of Jabotinsky, Begin and the Irgun.

The similarities between the American Neoconservative movement and the Israeli Neo-Revisionist movement (followers of Vladimir Jabotinsky, including Prime Ministers Menachem Begin, Yitzhak Shamir, Netanyahu, and to some degree Ariel Sharon) are shocking.

As in the case of the Neoconservatives in America, calling the divide of politics among Jews as “left vs. right” is, well, lying. Politics in Israel is dominated by Zionism. The political parties fall into three camps, the first two being the largest: Labor Zionism, Revisionist Zionism and Religious Zionism. Neoconservatism spans both the Democrat, the Republican, and even the Libertarian parties. A one party state like the Jim Crow era in the America South.

In Israel’s political system, there are also several non-Zionist Orthodox religious parties, non-Zionist secular left-wing groups as well as non-Zionist and anti-Zionist Israeli Arab parties. But they are suppressed.

I said it a year ago: “The role of oligarchs cannot be dismissed both abroad and at home. The Atlantic Council serves as a landing pad for them in America.”

While that “octopus” is fantasizing that what occurs next is on the level JFK’s assassination or 9/11, I do not see that happening. America has a legal infrastructure that may have been compromised by the likes of George Soros but still greatly exists. The conflict over the presidential election results will be settled in the courts. Though, it is going to be a real shit show.

Keep your eyes on Israel. We need to be talking about Israel. Everybody gets very nervous when we bring up Israel. Israel is the soft area between the eyes of the octopus.

The over one million people who immigrated to Israel from the former Soviet Union in a wave from the beginning of the 1990s have changed Israel to its core — socially, politically, economically, and culturally.

We need to speak candidly about Israel. Instead, we use metaphors galore, because everybody is afraid to bring up the Jews.

Joseph Casolaro was an American journalist who came to public attention in 1991 when he was found dead in a bathtub in a room of the Sheraton Hotel in Martinsburg, West Virginia. The medical examiner ruled the death a suicide.

His death became controversial because his notes suggested he was in Martinsburg to meet a source about a story he called "the Octopus” about a sprawling collaboration involving an international cabal, and primarily featuring a number of a bunch of big stories in Washington, D.C. at the time, in the 1980s —the Inslaw software case, the Iran hostage crisis, Ronald Reagan’s win in the 1980 presidential election, and the collapse of the Bank of Credit and Commerce International, and Iran–Contra.

Casolaro's family say that he was murdered. I say the story makes for great propaganda.

Polish Zionist Jabotinsky and his buddies implemented a staggering number of permutations that did divisive harm to Judaism. At the same time, the permutations enabled Polish Zionism to appeal to a broader base of supporters than any other Jewish political movement. This created an elite leadership that was vastly out of touch with the majority of Jewish people.

I will be writing about the purple octopus of Polish Zionism, again.