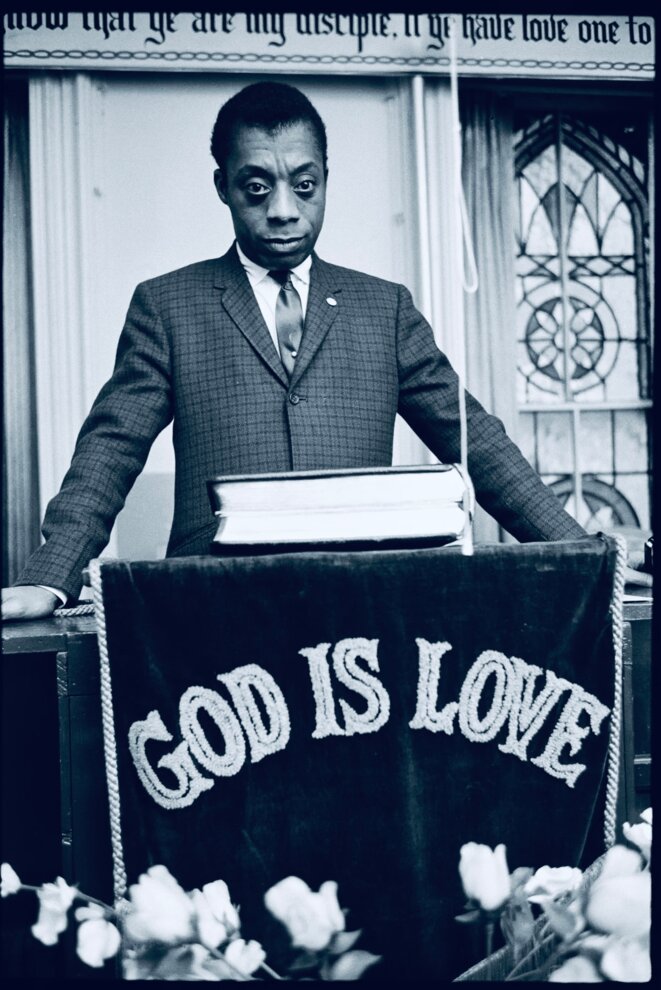 James Baldwin, God Is Love, Harlem, 1963 © Steve Schapiro
For The Saker, I just wrote nearly 8,000 words about Zionism. I will break it down —and break the silence— to just three words. We’ll take it really slowly.


There are two types of revolution. Both are socially constructed and need lots of financial backing to accomplish. First, there’s a political revolution by gaining power through violence and the use of terror, like the Bolsheviks accomplished in 1917 in Russia. Second, there’s a cultural revolution in which one demolishes from within the basis of civilization in the country one wants to conquer —its culture, way of life, beliefs, morality, values and ultimately democracy. Like the fall of Byzantium.

Some Zionist operatives in Canada have exposed the latter. In fact, the incompetent idiots exposed the biggest subversive campaign in the history of the world — the Zionist Cultural Revolution. Namely, settler colonialism. Zionism was a political enterprise of the British Crown. British imperialism laid the groundwork and set the precedent for Israeli settler colonialism long before the official establishment of the Israeli state in 1948 —in 1917, to be concrete.

Since it began more than 120 years ago, Zionism has changed, and different ideologies —political, religious and cultural— within the Zionist movement have emerged. It is very difficult to understand the global politics of Jews. Politics these days is super shady, in general, and Zionism is a political enterprise of the British Empire. We are up against the Anglo-Zionist propaganda machine.

The “100 Years' War on Palestine” and the settler colonialist DNA of Israel that continues to oppress and displace the indigenous Palestinian population is, in fact, a well organized Zionist cultural revolution to erase the Orthodox ascetic Abrahamic religions worldwide.

Judaism lacks a central authority—unlike how the Vatican governs the Catholic Church, for example. Given the maneuvers of British financiers, it was unavoidable that the Jewish religion got captured by the Zionist movement, but the consequences were predictable —the racism, chauvinism, intolerance, and violence, that was bound to follow Judaism's collaboration with Zionism.

Zionism may have ditched all of the spiritual aspects of the peaceful religion of Judaism but it conveniently held on to mesira (omertà), no interest money lending for other Jews, and the transnational tribal networking. Voilá, you have got a secret global racket. It actually is not easy to become a billionaire in today's economy unless one has shadowy backers or is engaged in illicit activity.

In Canada, the Zionist racket exists in the form of the federal Liberal party and it trickled down south along with multiculturalism and identity politics. In the U.S. we call it Neoconservatism. In fact, the founder, Irving Kristol, is called the “Godfather” of Neoconservatism.

Like their intellectual predecessors the Bolsheviks, the Neoconservatives approach everything with religious fervor —and unmitigated arrogance, illegal secrecy, noble cause corruption and plundering, and perverse cruelty— and journalism.

The phenomenon of a subversive identity occurs at the intersection of Soviet Russian (all the former states), Jewish and Israeli identities that often clash with each other and create a gap between cognitions and behavior. Sociologist Larissa Remennick writes about this in regards to Soviet-Jewish immigrants.

Additionally, in the past many argued that the Anglo-Saxons cared so much about the Jews because they modelled themselves on them. Had they themselves not come to and conquered a promised land, Britain, after a long journey? Some scholars have suggested that the early English thought that they were God’s new Chosen People and that their intellectuals wrote so that their people would know how to fulfil their elect status as successors to the Jews of old.

It is madness at both ends. For both groups, the interest in the Jews has been about expressing a self-important and insular sense of “chosenness.” Elitism.

The ranks of Jewish extremist groups in Israel are filled with immigrants from the U.S. and other English speaking countries. Toronto in Canada is a nexus for the phenomenon and for the white supremacist hate crimes that come along with it. Toronto is the most Zionist community in the world.

What seems to be dominant in Zionism since at least 9/11 is the Revisionist Zionism of Ze’ev Vladimir Jabotinsky. Zionism appears as terrorism. There appears to be a consensus among elite atheist Jews in certain quarters that subversion is cool, racism is acceptable and lying is de rigueur. And the ruling Likud party in Israel is Jabotinsky’s party. There appears the economics of hate and intolerance. Like Jim Crow in the southern United States —the one instance in our country’s history of American authoritarianism.

Many members of Zionist terror organizations like the Stern Gang came from the ranks of Jabotinsky’s followers. The Likud Party, still one of the dominant political forces in Israel today, is itself the direct heir of Jabotinsky’s Revised Zionism.

Written in 1967, Negroes Are Anti-Semitic Because They're Anti-White, James Baldwin has preserved an inevitable market advantage that was subsequently exploited throughout the whole world by international financiers. Thus, do NOT blame the Jews! This is pure economics—pure capitalism.

Here is a link to an editorial from 1978 that explains what is going on today. Zionism is the state of collective psychosis through which the City of London (financiers) manipulates international Jewry. Brainwashing.

Despite his prominent role as one of the most important American authors and social critics, James Baldwin’s literary and intellectual legacy has been dismissed by the Harvard crowd, the transparent cabal who decide who gets to be admitted to the VIP area.

I’m talking about those Anglo-Saxon elite who first gained America’s trust as the “best and brightest” —the academics and intellectuals who were in John F. Kennedy's administration— before JFK was assassinated. Then, for forty years, their subversion in DC just got worse and worse, but the American public’s trust remained steadfast.

What was once public trust in the elite has now become a constant struggle for control of our thoughts, speech and action. It is simply exhausting.

Trust is our pride and joy, so Anglo-Saxon subversion in America is no small matter. Americans pay taxes, vote, register automobiles, follow both federal and state laws, get vaccinated, and as such submit to COVID guidelines today out of trust. Trust in God, not in princes.

James Baldwin knew that God is love. Christianity alone teaches love. There’s really nothing fancy about it. It is the height of elegance in its simplicity. But the problem today is that because Christianity was smeared by Wall Street, Madison Avenue, Hollywood, the so-called “intelligence community,”especially the CIA, and Harvard, this elegantly simple notion will be immediately misinterpreted as a crude political statement in much of the West. When, in fact, it means “be nice to everybody” —the Golden Rule.

A trap of the British dark arts is that if specific population groups (Blacks, Jews, LGBT) in American society are only defending their own interests (with help by the likes of Zionist George Soros), then the America Bible of “all men are created equal” indefinitely remains under siege.

True or Orthodox Christianity (all of the Orthodox Abrahamic religions for that matter) is not subversive. However, its truth is a subtle, consistent challenge which can pose an ultimate bulwark or threat to everything that makes undemocratic power happen —unmitigated arrogance, illegal secrecy, noble cause corruption and plundering, and perverse cruelty— and journalism.

Omertà is the capitalist way, the blood oath of corporations and especially the media. The illegal secrecy that fuels elite conspiracy inherent to capitalism, the world over —the CIA omertà, the mafioso code of silence and honor, and the Cold War code, admit nothing, deny everything.

In a room where people unanimously maintain a conspiracy or omertà of silence inherent to capitalism, one word of truth sounds like a pistol shot.

God is love. Break the silence.

“Strike a preemptive blow against your opponent,” says modern morality. Instead, love your enemies. God is love.